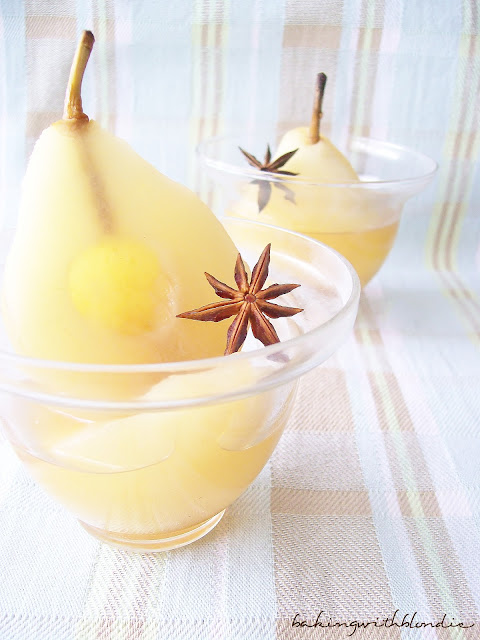 Today it poured and poured outside, only to have full sunshine a few hours later. I love days like this. I think the rain soothed my little man into an almost 3-hour nap. These poached pairs didn't even take a small fraction of that time to prepare.

The first thing that captured me about this dessert is the way it looks. Pears are so beautiful. They look beautiful. They taste beautiful. I originally wanted to make the Poached Pears/Pear Compote earlier this week, but the pears were taking their sweet time ripening. They were well worth the wait.

The second thing I noticed was the star. What is that? I quickly looked through the ingredients - it's called the Star of Anise. I couldn't find it at two of my local supermarkets. A friend told me to head on over to the Latino Market, and that's exactly where I found them (about 10 stars for 74 cents). The star of anise coupled with the cinnamon smelled just like Christmas wassail. It was absolutely wonderful. When the buzzer went off in my kitchen to take the pears off the stove, I didn't want to because they smelled so good as they simmered away.


I love how simple the ingredients are. The pears tasted sweet, with the subtle zing of cinnamon and comforting warmth of the anise. I think that even though these taste like the holidays, they're perfect for summer because they're served cold. And oh how refreshing they are that way! I think these would serve well after a big meal. They're not heavy at all, but have enough light sweetness to satisfy any sweet tooth.

Have a great weekend, everyone!

Peel the pears and halve lengthwise. Use a melon baler to remove the core from each half of the pear. Combine the pear, water, star anise, cinnamon, lime juice, sugar, and salt in a medium saucepan. Place over medium-high heat and bring to a boil. Cover, reduce heat to low. Simmer for 14-20 minutes (could me longer, depending on how ripe your pears are. Mine took about 30 minutes because they weren't quite ripe). Do not stir. Cool, refrigerate, and serve chilled. 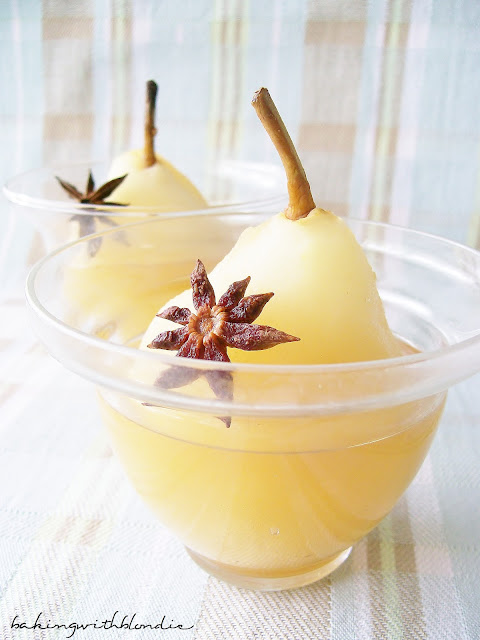