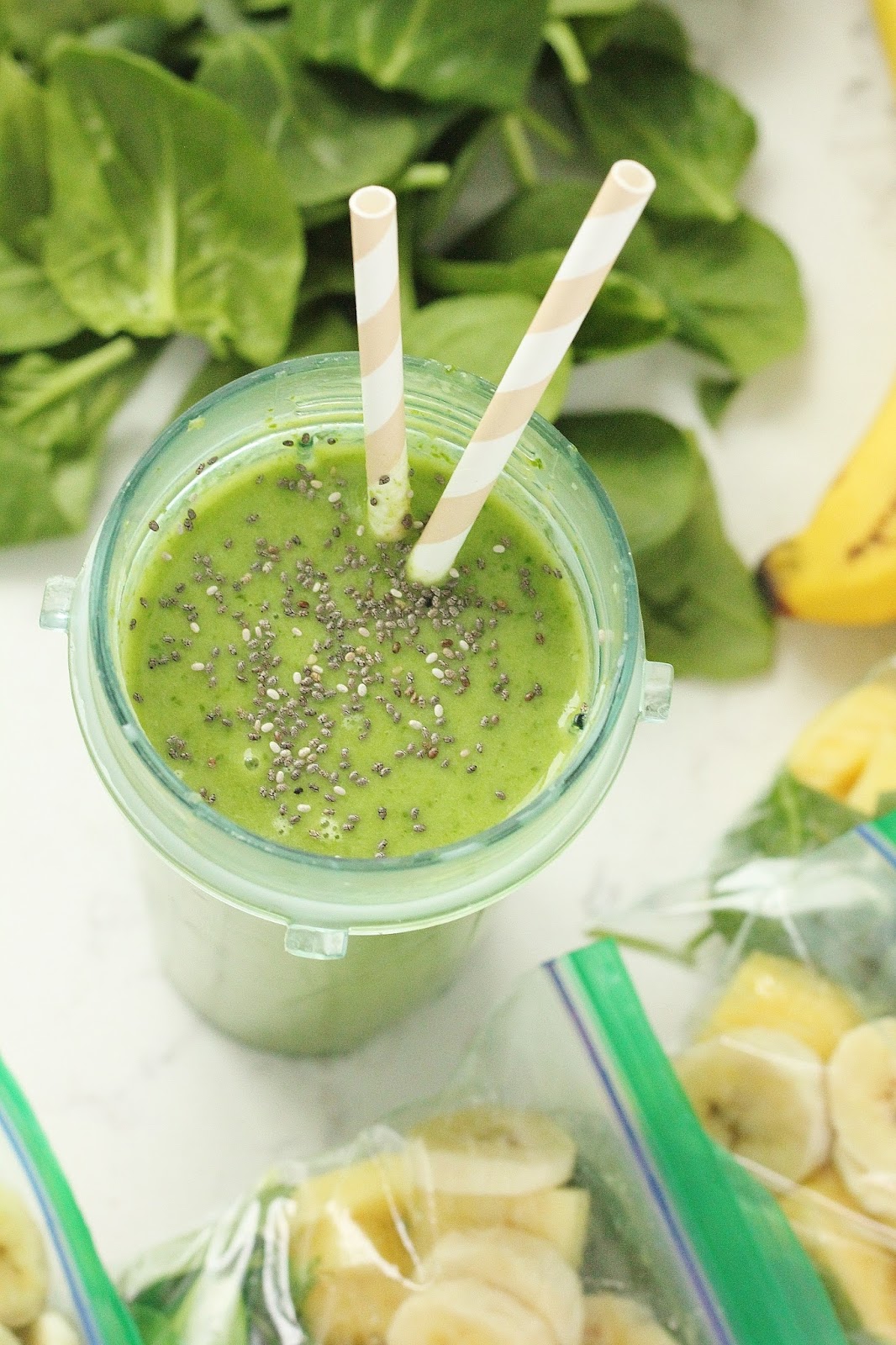 If there's one thing that I know, is how to make a killer green smoothie. Almost three years ago this month, I started on the green smoothie train. I tried so, so, many recipes... and lots of them were really awesome. But none compared to this little concoction of mine. I have one of these almost every morning (especially if I've gone for a run), and it really is the best tasting green smoothie I've ever had. You can't even tell there's spinach in there. It tastes like a pina colada pineapple type smoothie instead, which is another plus.

I don't have a lot of time in the morning to chop up fresh pineapple and bananas, and sometimes my giant spinach bag doesn't keep as well as I hope. So I've always stayed true to my little smoothie packets here.

Friends, this isn't just any green smoothie recipe someone's throwing on the blog at the new year to keep with the "all things healthy" theme. THIS is the green smoothie I've had for years, and love the best. So you're in for a real treat, I promise you! 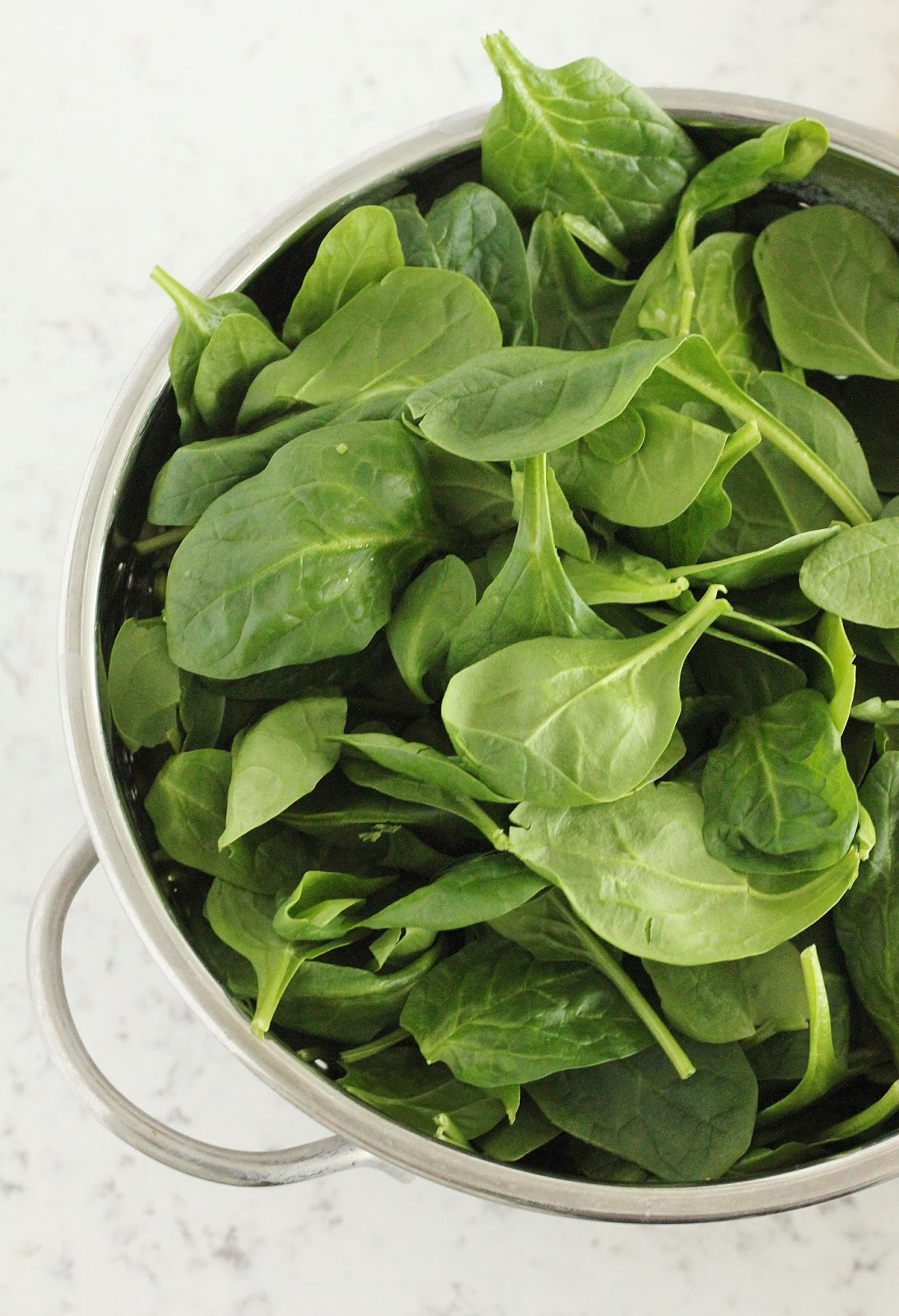 First, let's start with the greens. I always use spinach. Sometimes I'll toss in some kale because I have some lying around and heaven knows I can't get my kids to come within a mile of that stuff. If you add kale, it will slightly change the taste, but I've learned that even a little splash of 100% apple juice covers the taste. Also, sometimes a little bit of peaches. Crazy, but true. I usually just stick with some straight up spinach. It freezes really well for smoothies. So if you see your spinach starting to wilt or get wet and soggy, take out the gross pieces and toss the rest into the freezer in a freezer safe baggie. 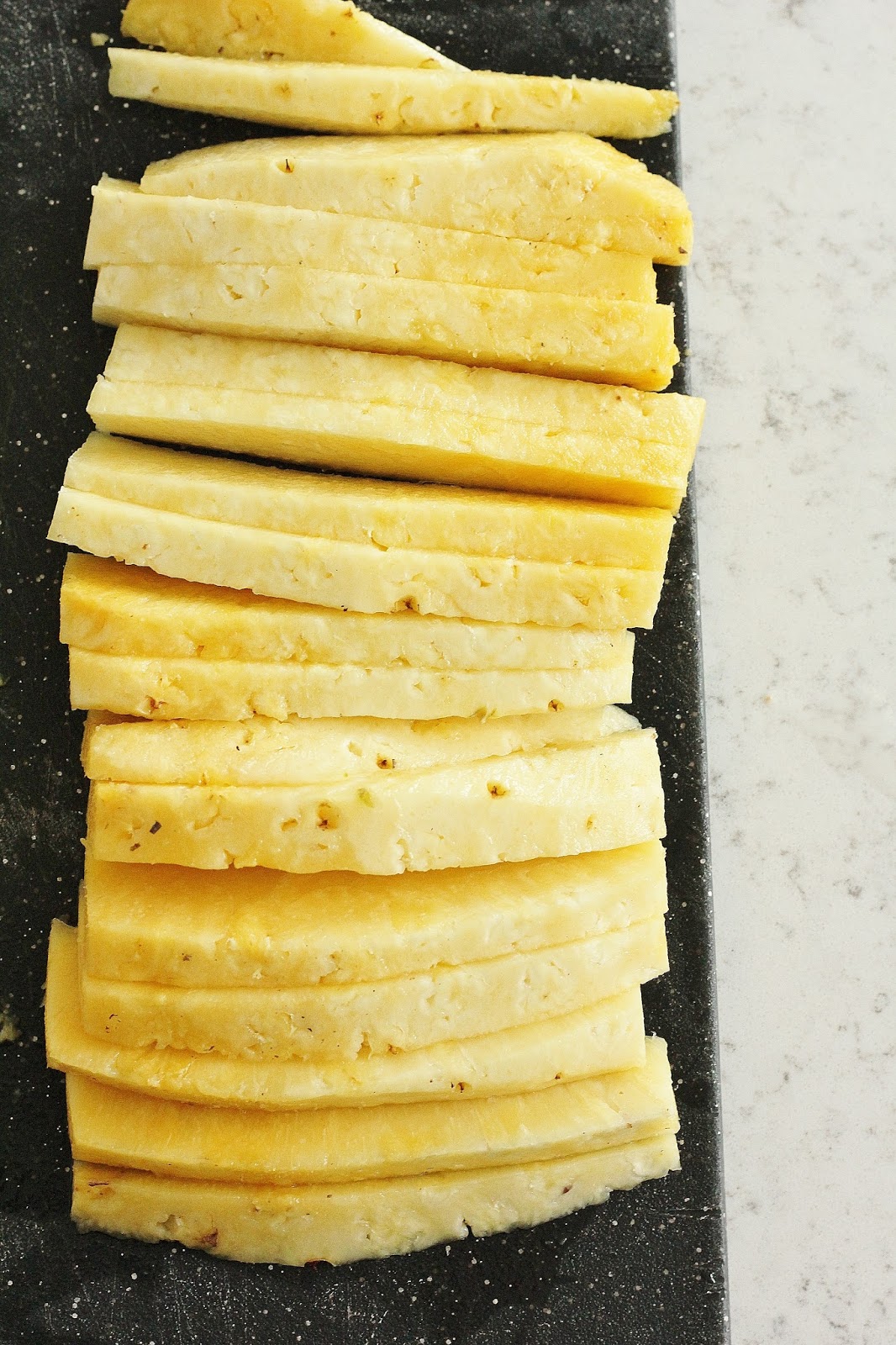 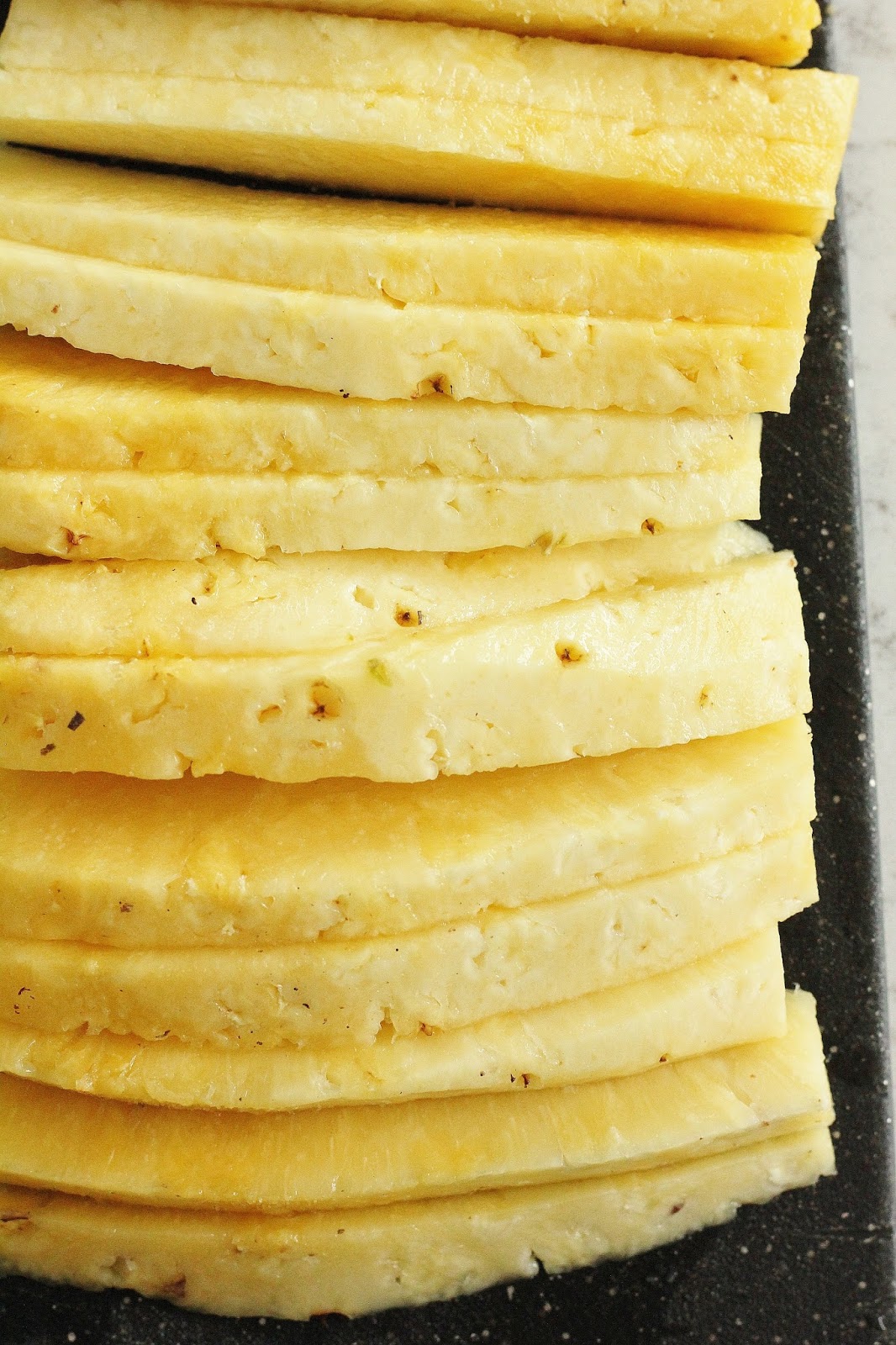 I usually slice them into wedges like this, then into cubes that I know will fit into my Ninja individual sized smoothie cups. 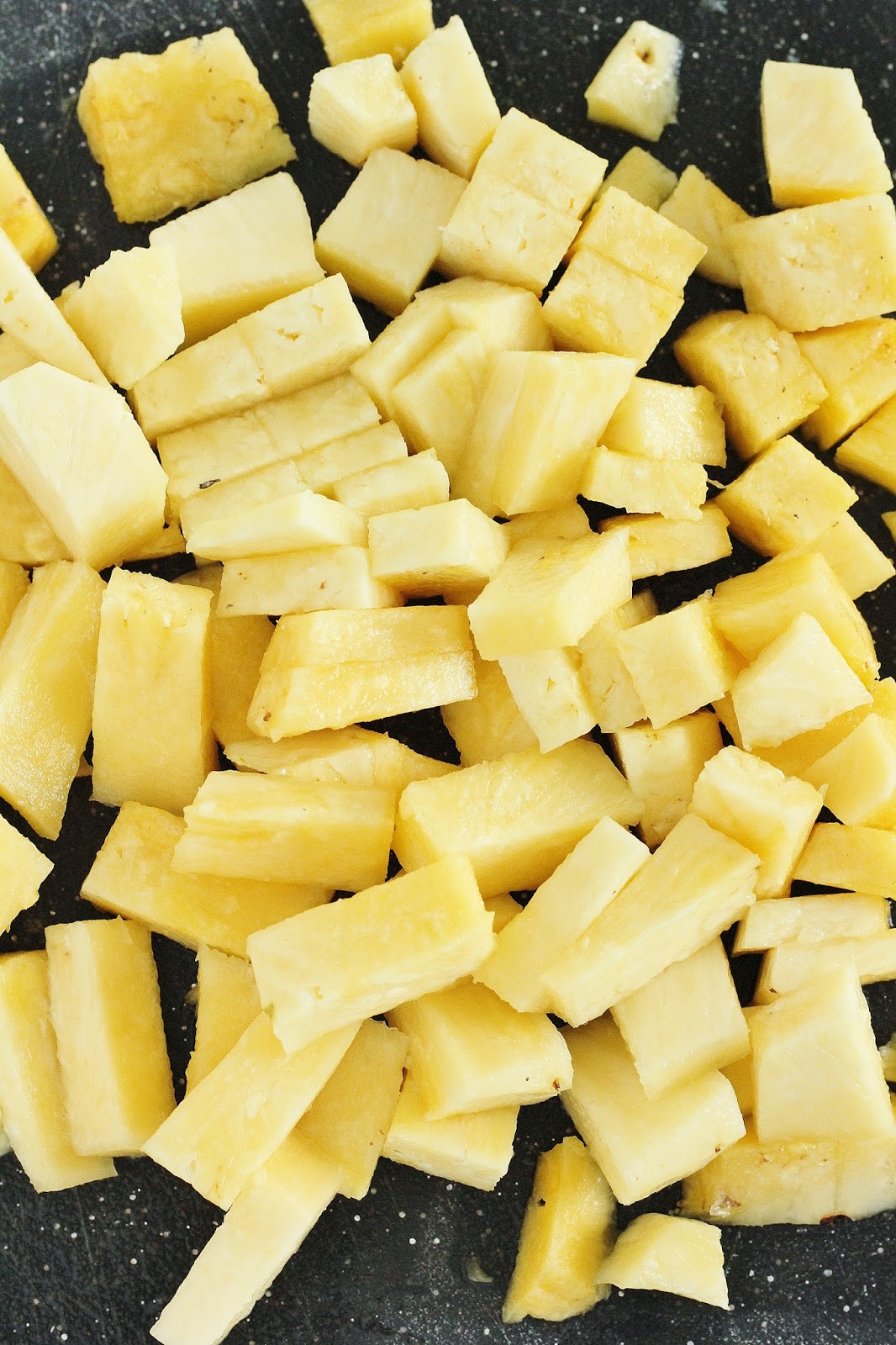 Next, I add in banana. I had a lovely picture of the banana slices and freaking deleted it forever from my computer (ugh!), so imagine gorgeous banana slices, haha.

I usually wait until the bananas are all yellow and even more ripe before I slice them up. The more ripe, the better, but not "banana bread ripe." 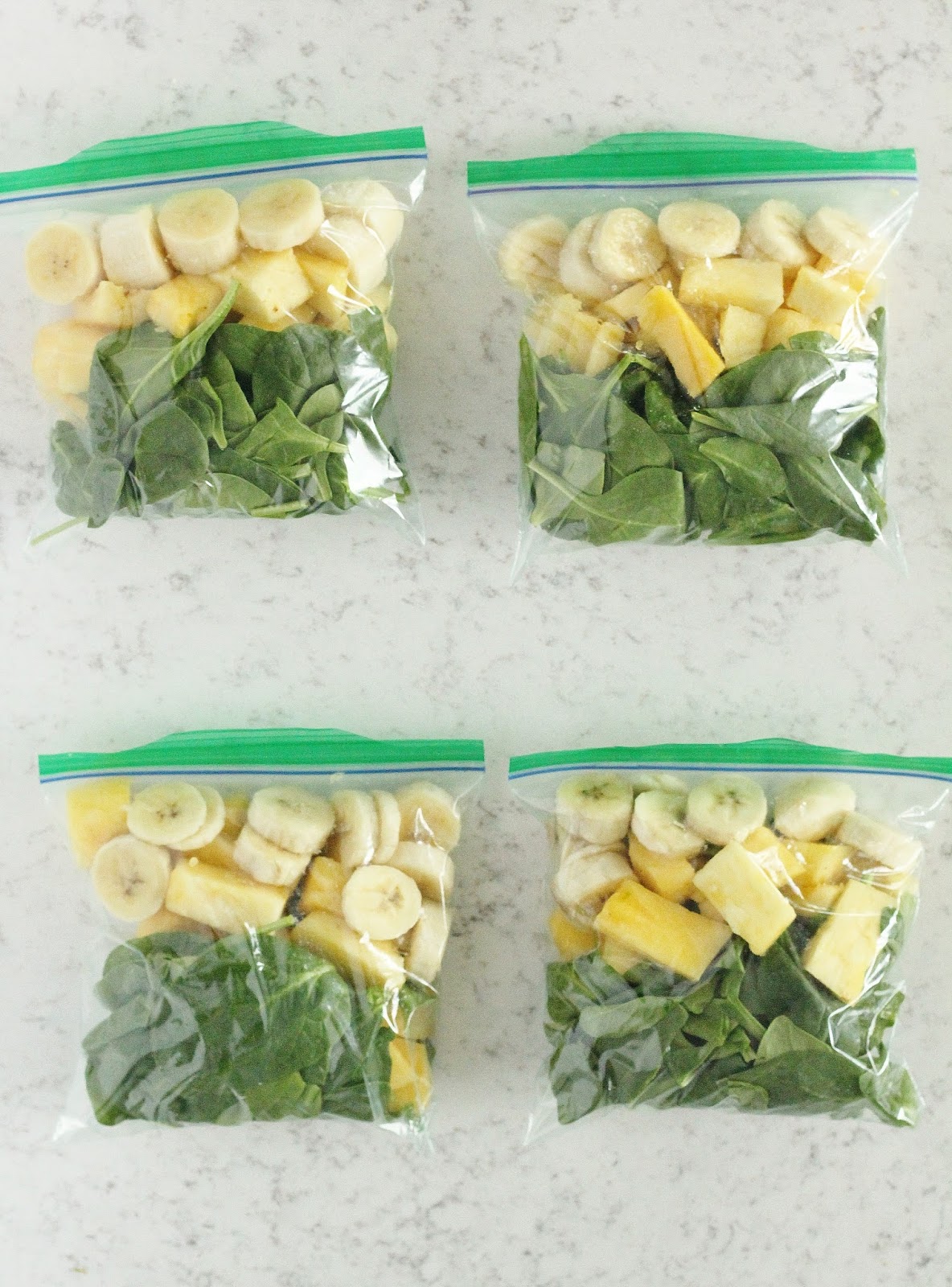 Next, I usually fill up 6 baggies. One for each day of the week that I'll have one (I don't usually have them on Sundays - we have a big 'ol breakfast instead). Make sure to not overstuff your baggies so they won't fit in your individual sized smoothie cups. If you're doing a blender with a large base, you're all good no matter how full you fill them. 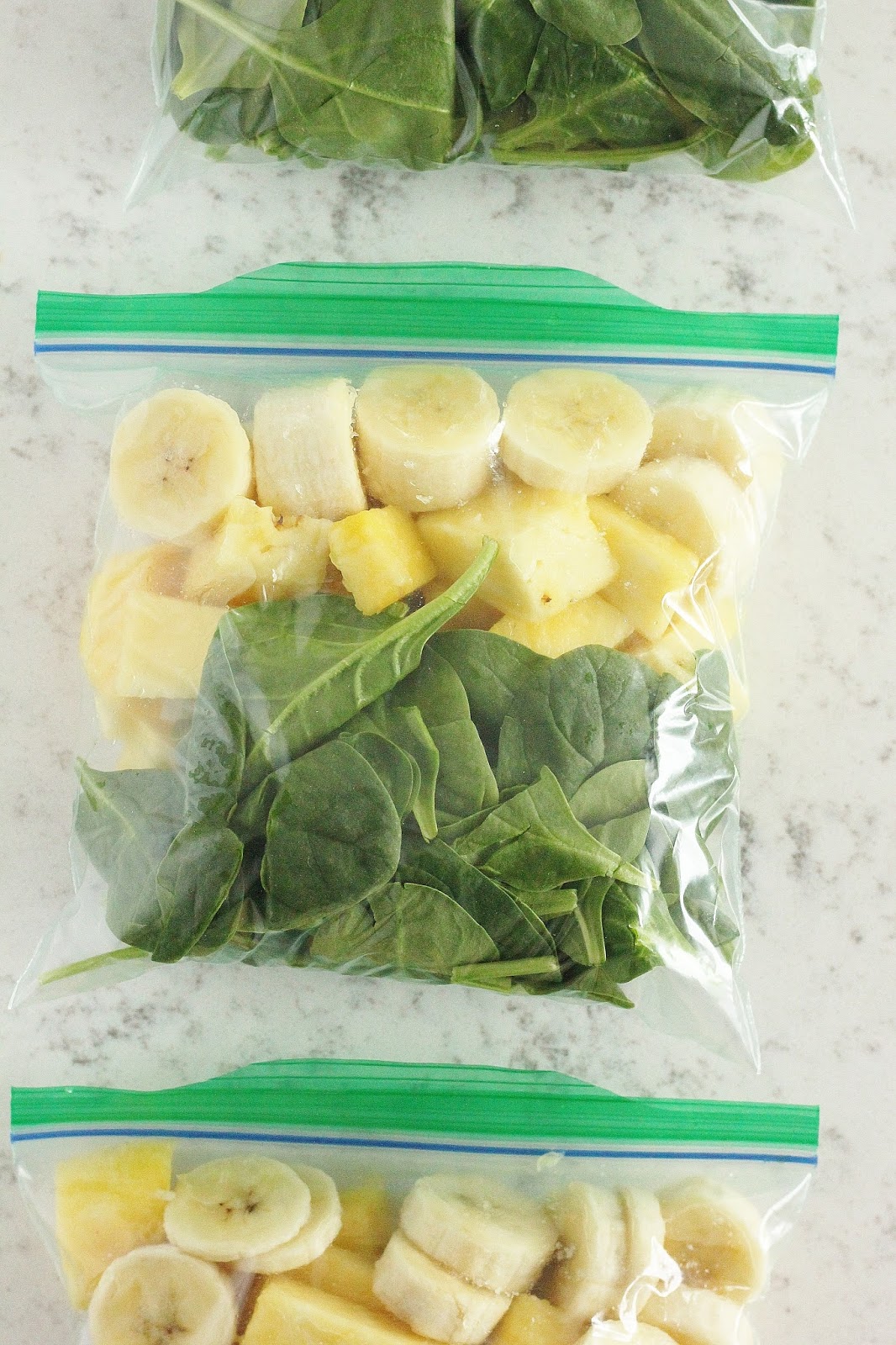 So there you go. THREE ingredients. Yep, that's it! 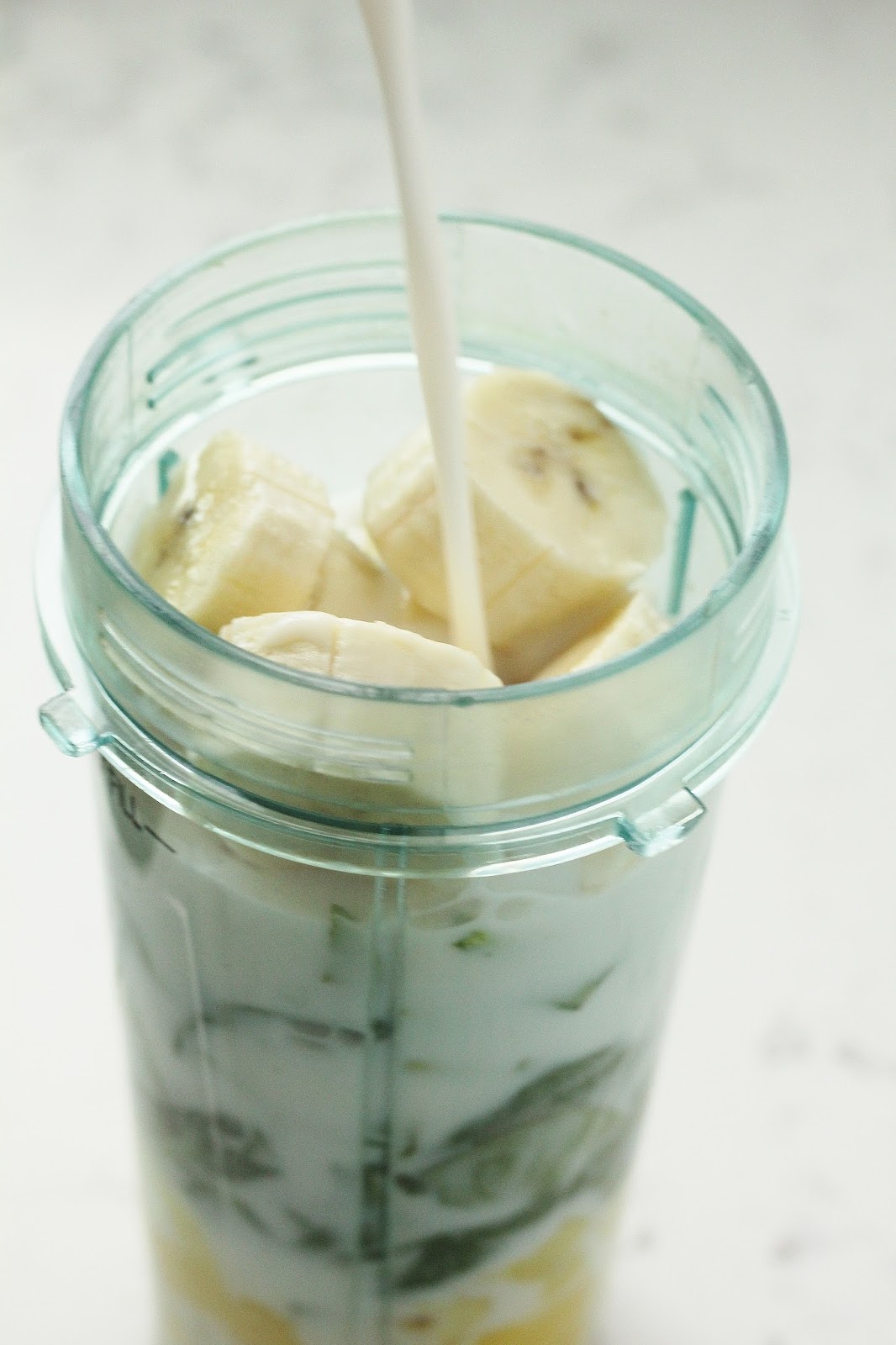 Okay, so I lied, there are more ingredients. Almond milk. Yep. I usually go for the unsweetened coconut almond milk and DUDE GUYS it's stupid good. I can't be more eloquent about it than that. haha. 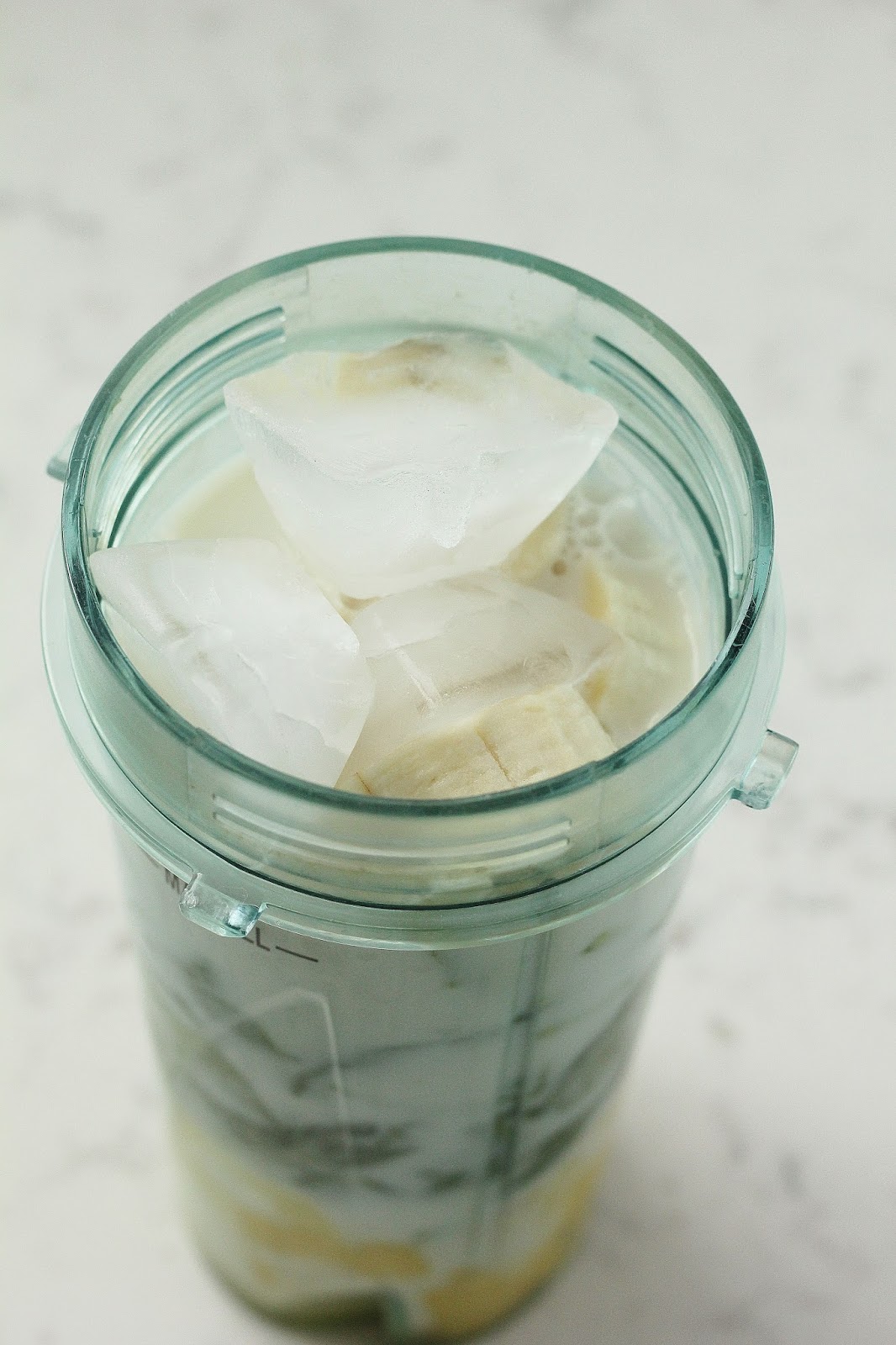 Ice. If you can fit it in, toss it in. If not, you don't have to worry about it. 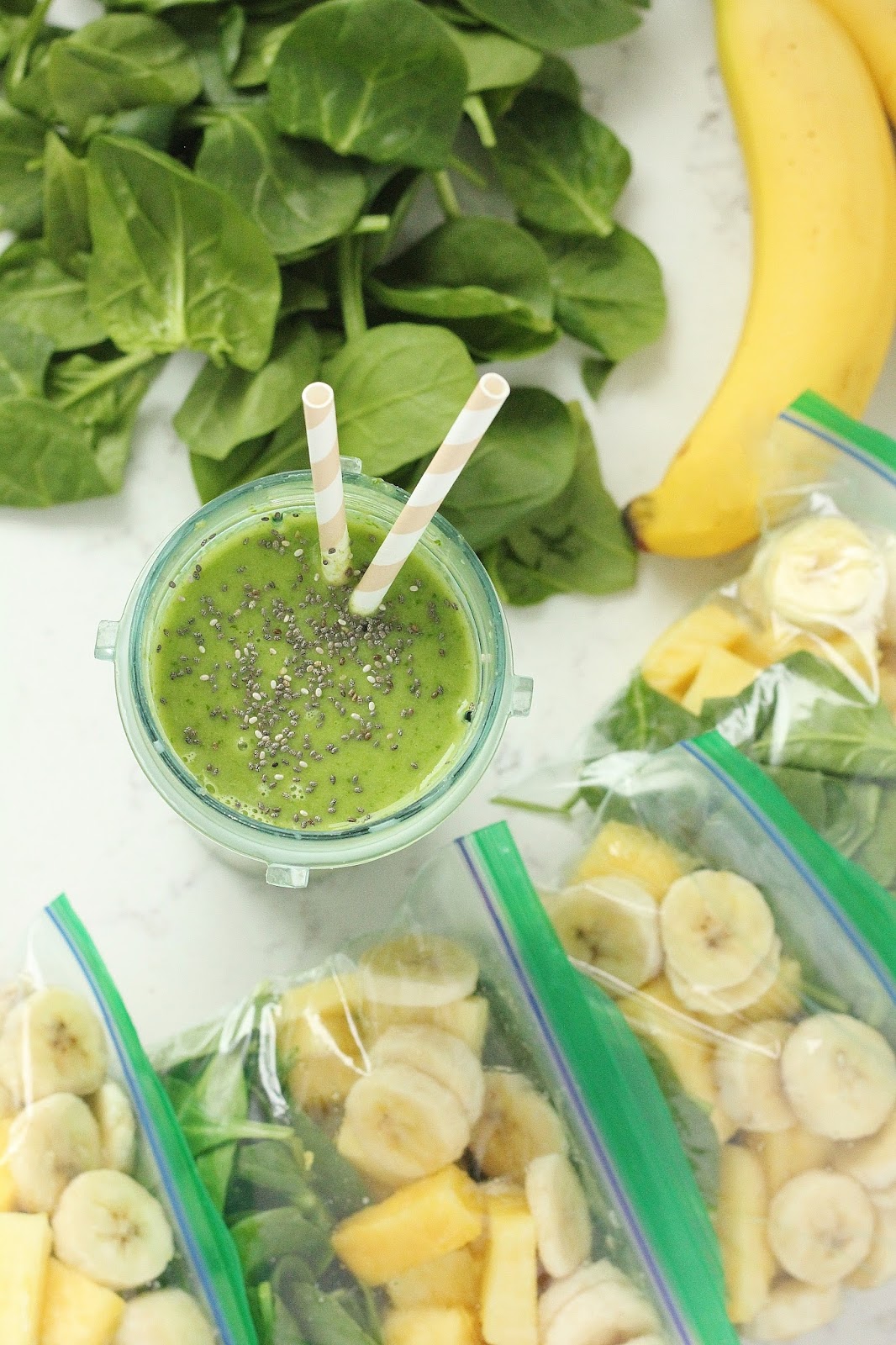 Blend it up, toss in some chia seeds for good measure, and...

No joke, though. I've had several people tell me how this smoothie is their favorite go-to now. 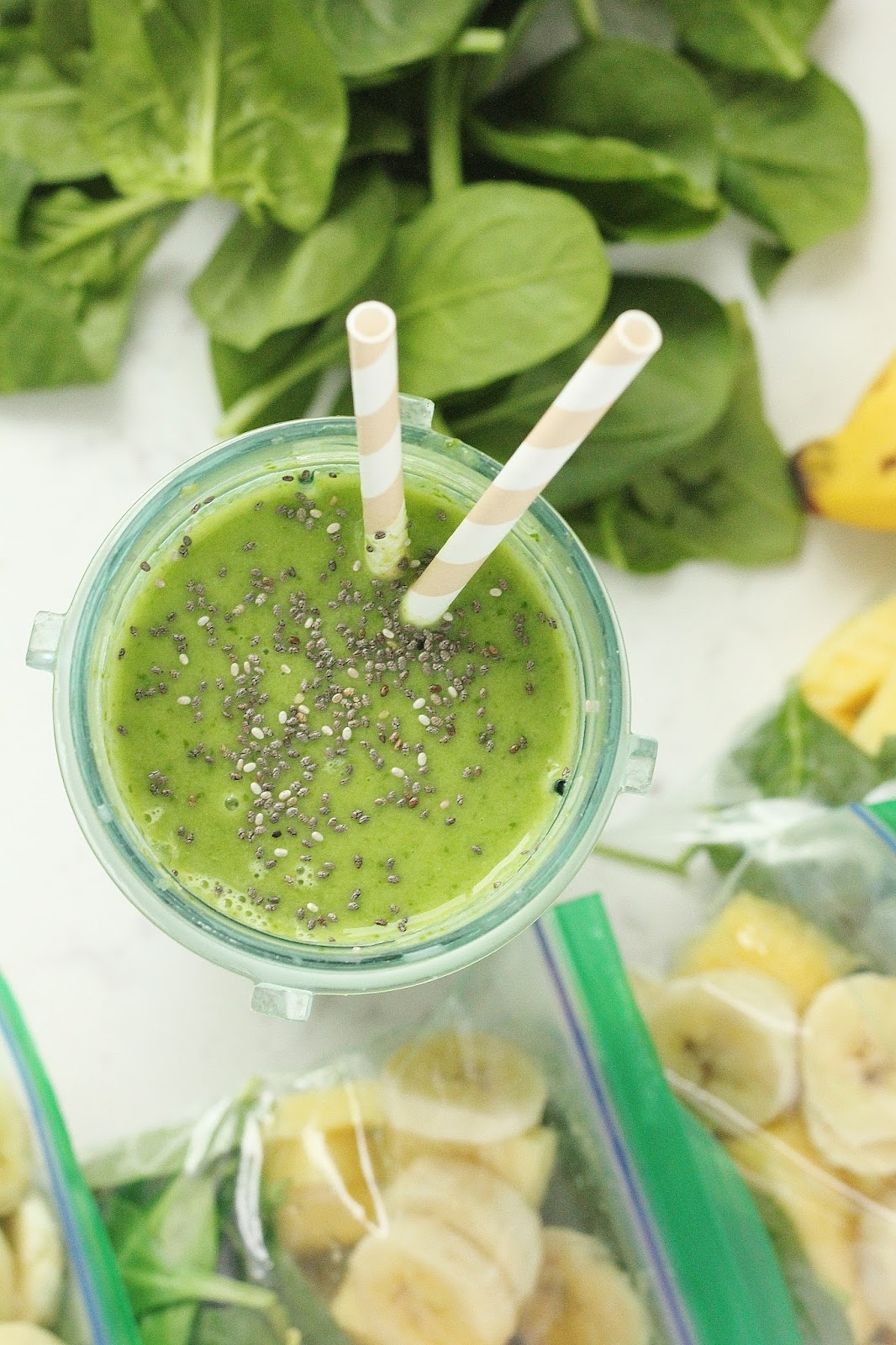 And for good reason. 😋 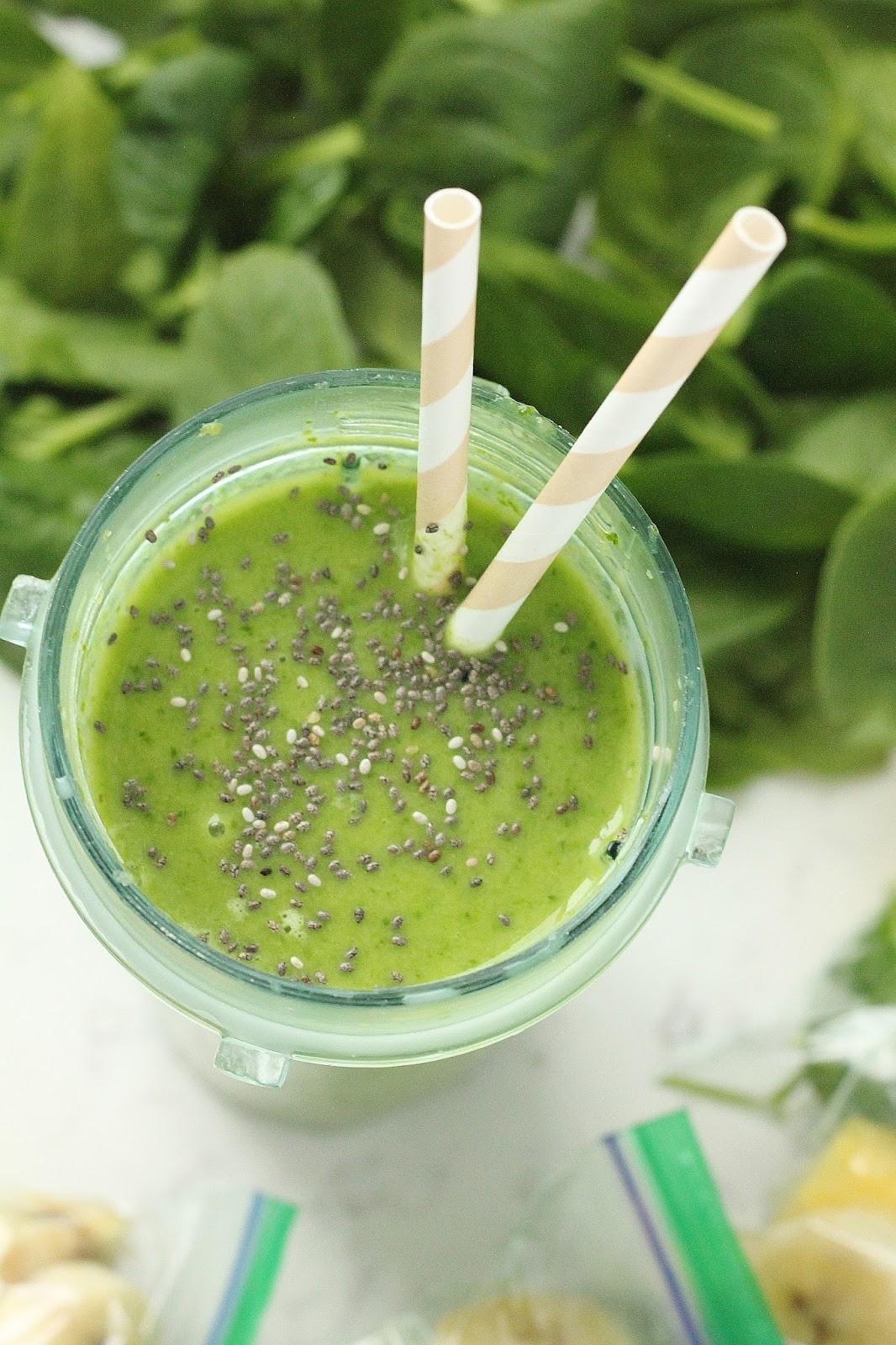 *Makes 1 serving per recipe. So double, triple, or quadruple according to how many days for the week you'd like a smoothie.*

method:
1. Place the first three ingredients in a freezer baggie, and freeze until ready to use.
2. When ready to have, place contents of freezer baggie into a blender or individual smoothie cup. Add in ice and coconut almond milk until it fills to the top, and blend. Top with chia seeds if desired.