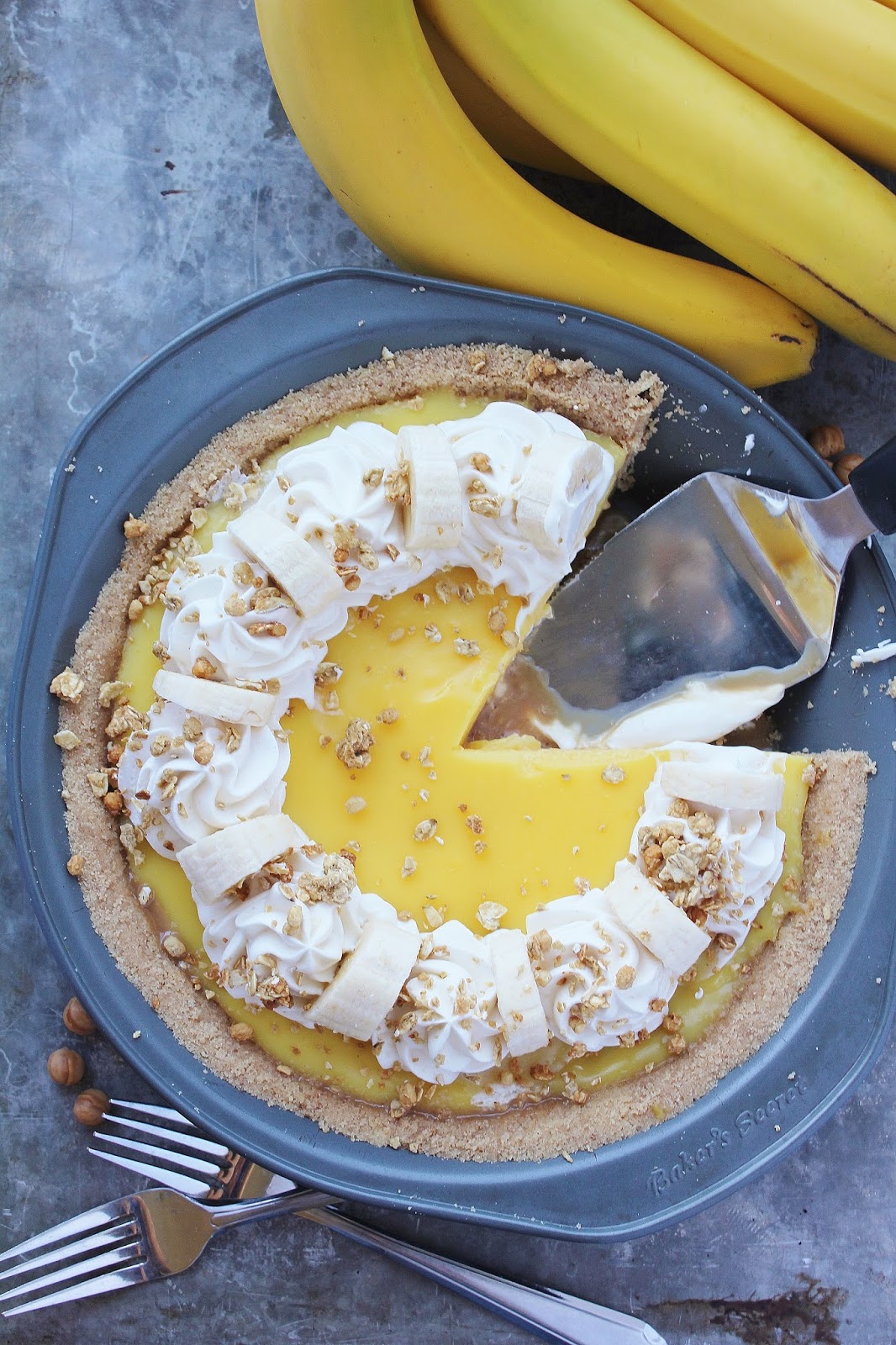 In my last post, I talked about all the pies I've tried lately, and we're just getting warmed up! I don't know what it is about the fall that makes me want to make pies all the time. Maybe it's the fact that Thanksgiving is in less than a week, and pie is still what I consider the perfect Thanksgiving dessert! It's a go-to, must-have, and everything in between.

Today, I wanted to share with you this amazing Banana Cream pie that just so happens to have salted caramel inside! That's right! Caramel and bananas are made for each other, and salted caramel is my favorite of all, so naturally, this one had to come together asap for this Thanksgiving pie-making season. 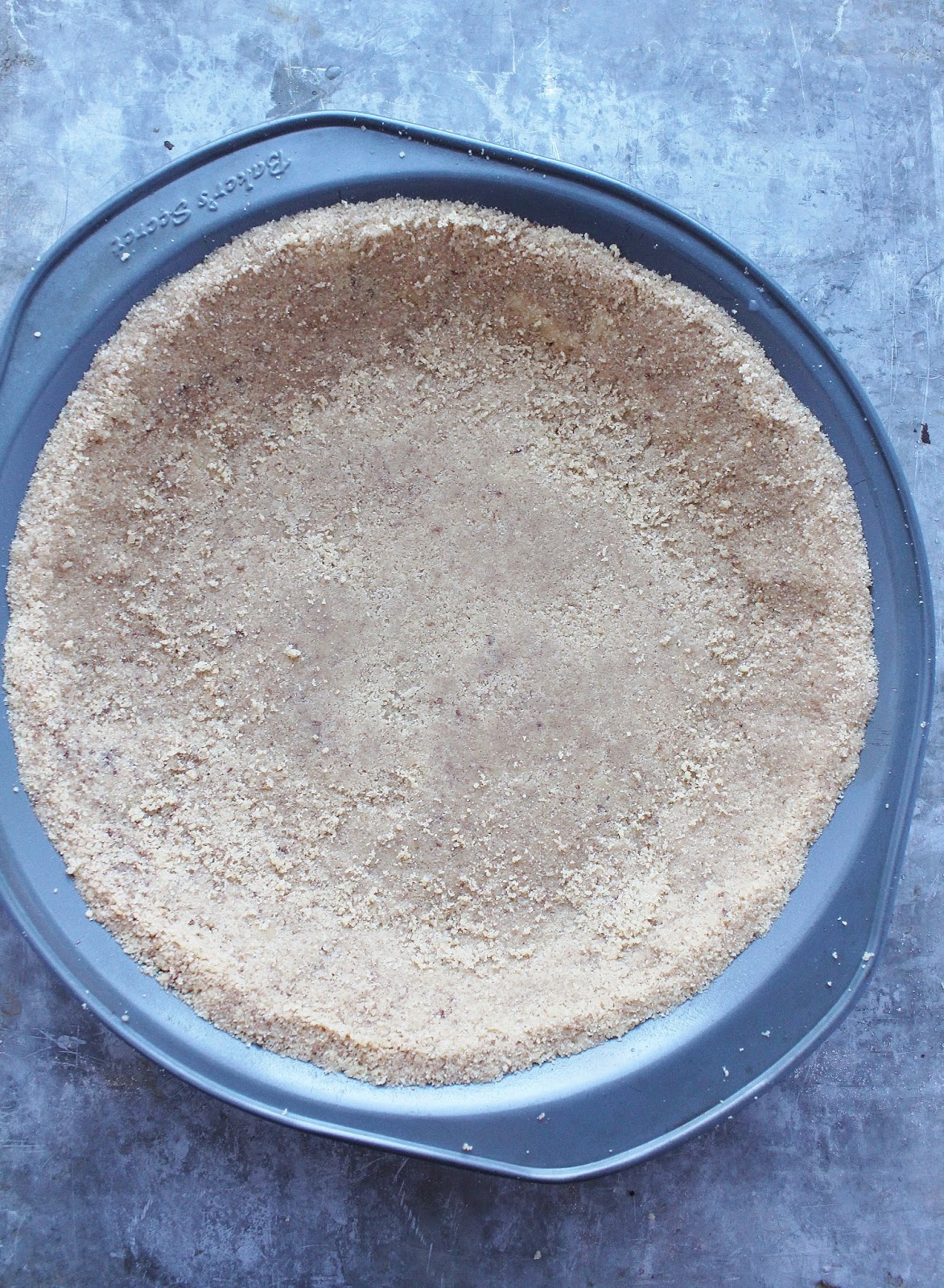 I have to admit, my first attempt was a total fail. Everything looked perfect until I cut into the pie. Then it completely fell apart and looked like someone had dropped it down the stairs a few times and then decided to serve it. Long story short, I was a little bummed out! It had so much potential, and tasted unbelievable. My husband begged me to make this pie again. With it tasting so good, I knew another shot at at it was worth it. I just needed it to look pretty, you know? People eat with their eyes, and I wanted this pie to look just as delicious as it tasted.

Second time was a charm, and here we are with this a-mazing salted banana cream pie today to share just in time for Thanksgiving! 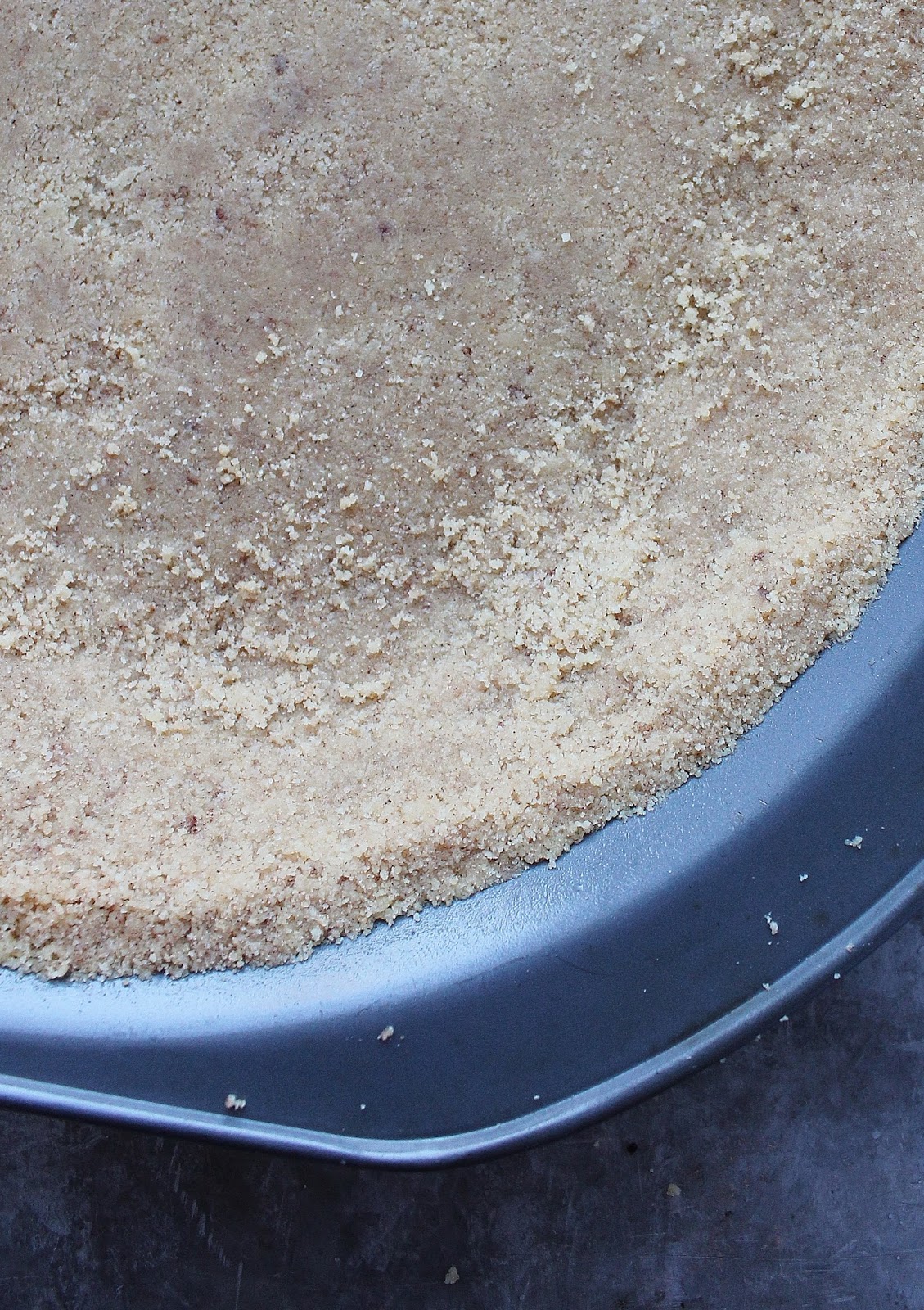 The crust is super straight-forward. Instead of using the traditional graham crackers, I went with something brand new! I found some Cinnamon roll Oreos from my local Smiths Markeplace  and knew right away it would be a match made in heaven for this pie! The cinnamon roll Oreos are out of this world, and added the perfect cinnamon creamy taste to the crust. If you can't find cinnamon roll Oreos, you can use the traditional graham crackers + a pinch of cinnamon and some white sugar instead of the cookies. But if you can, FIND THE COOKIES. It will change your life, and pie-crust making game. 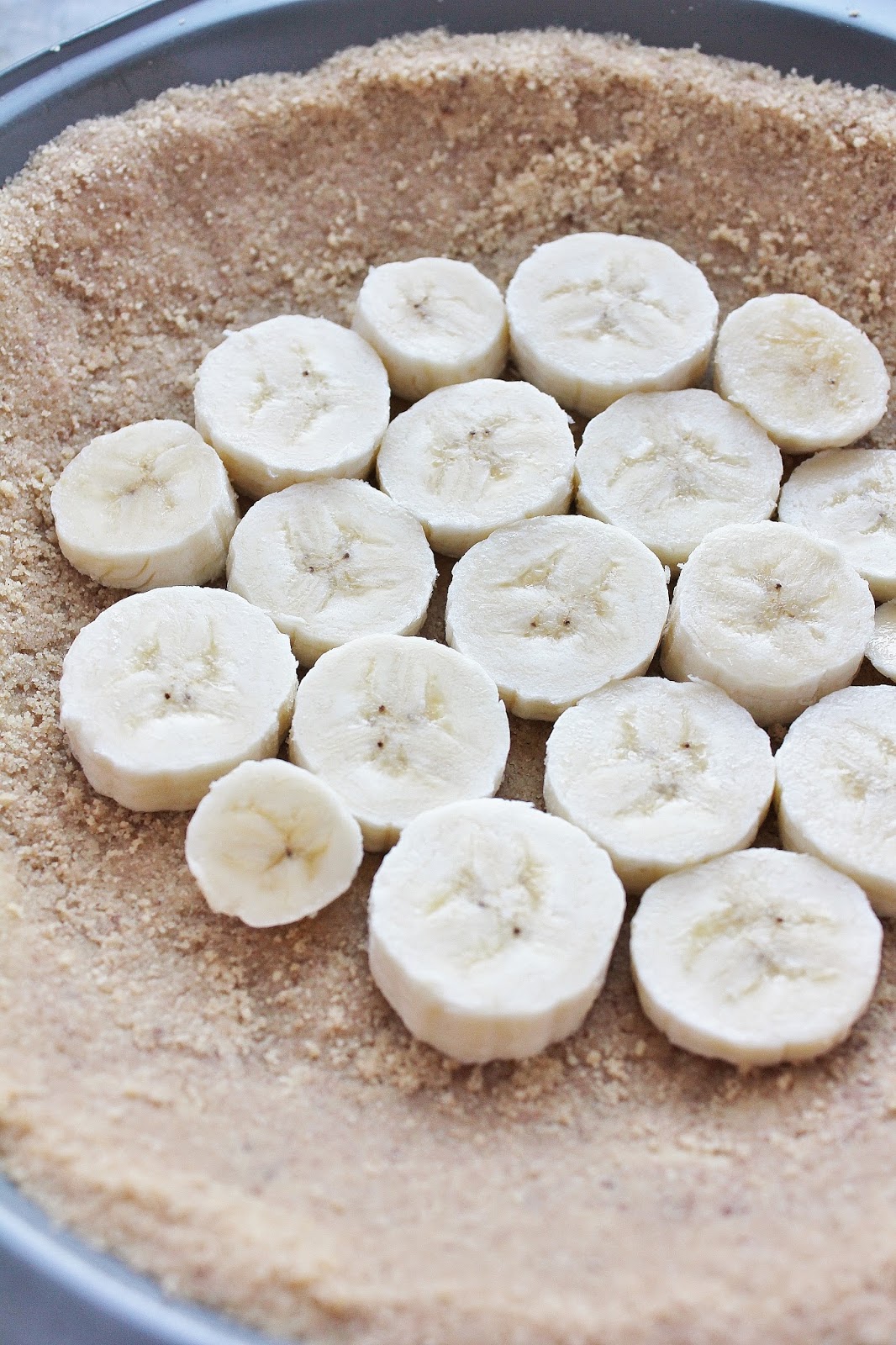 Making the crust was super easy! I just pulsed the cookies in the food processor until they formed a fine crumble, then added in some butter to hold everything together. 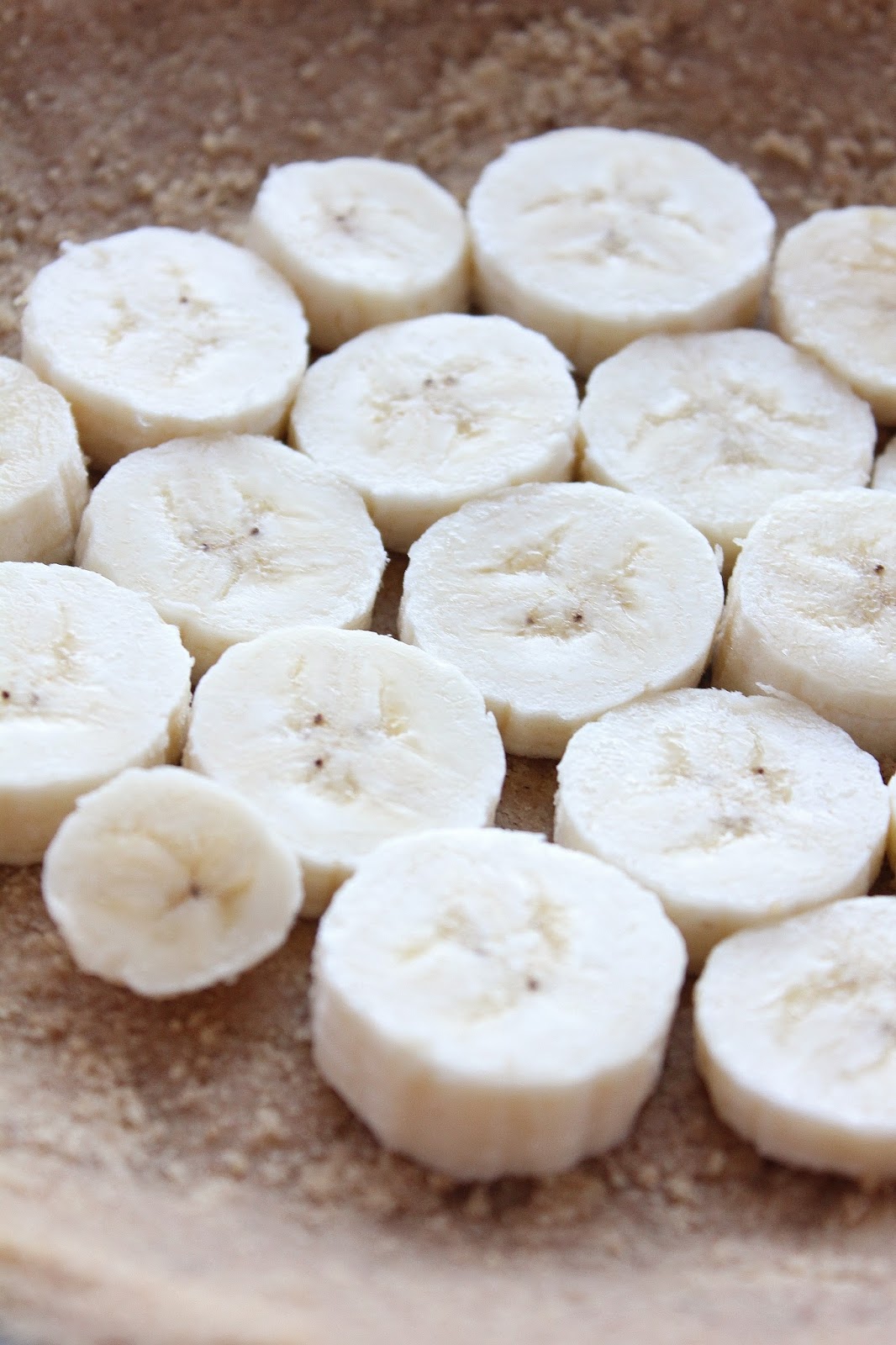 Next, I sliced up one whole large banana and placed the pieces in the center of the pie crust. 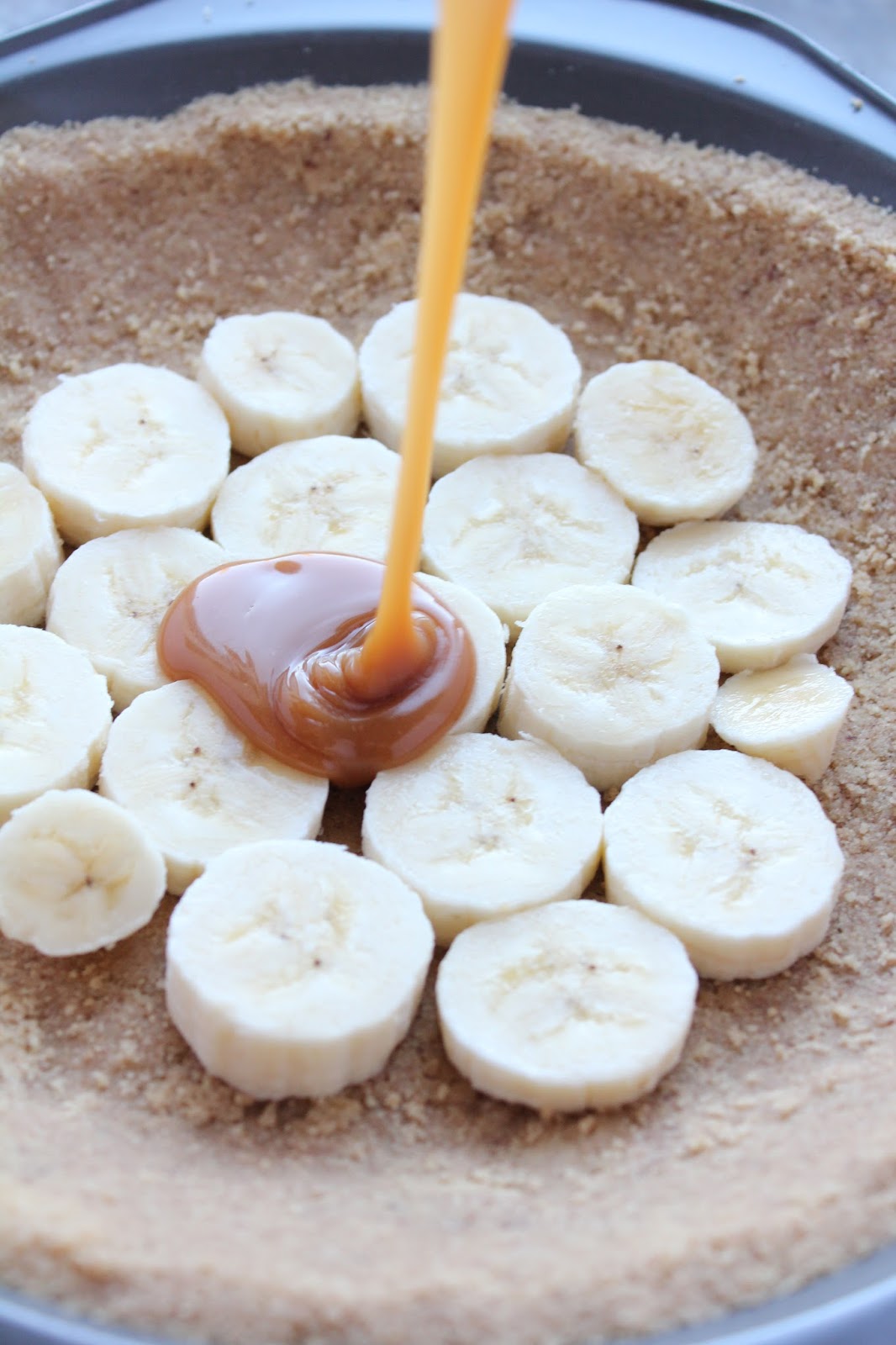 Next, you can either make your own caramel (which is super easy and tasty!) or you can go the quicker route and melt up some caramels, toss in some sea salt, and call it salted caramel in a hurry! 😉 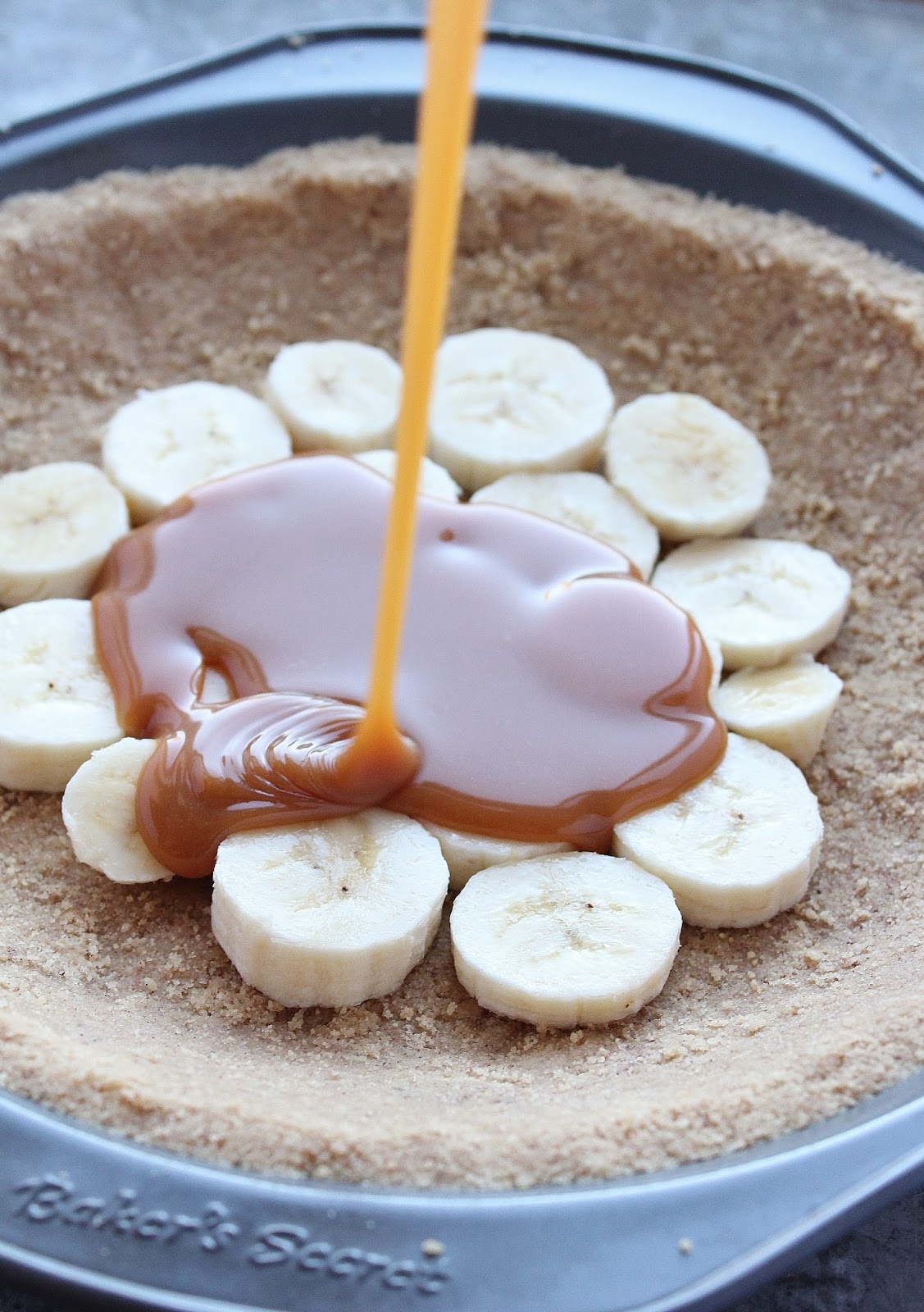 Pour the salted caramel right on top of the arranged bananas, not too much, though! The salted caramel and banana cream filling tend to not stick together very well if there's too much caramel (which is what happened in my first fail attempt, haha). Pour just enough caramel to cover the bananas. 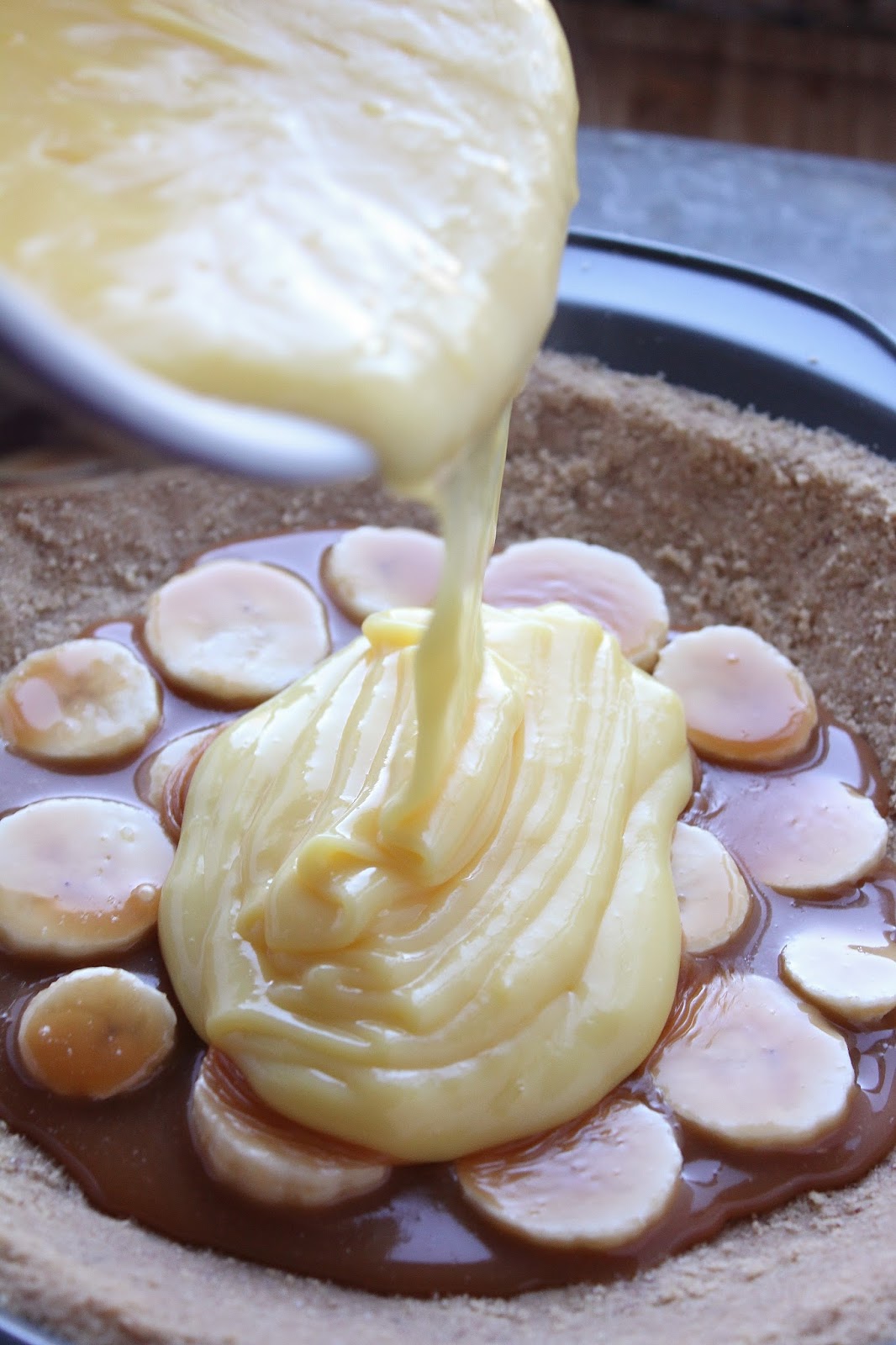 Next, I'm cutting corners again, but when it's Thanksgiving and you have ten recipes flying through the kitchen, you're going to want to go here with the instant pudding mixes all day long for this pie. I used 2 pudding mixes - one vanilla, and one banana cream. I prepared them according to the directions on the package (easy, add milk and microwave and stir, boom, pudding time). 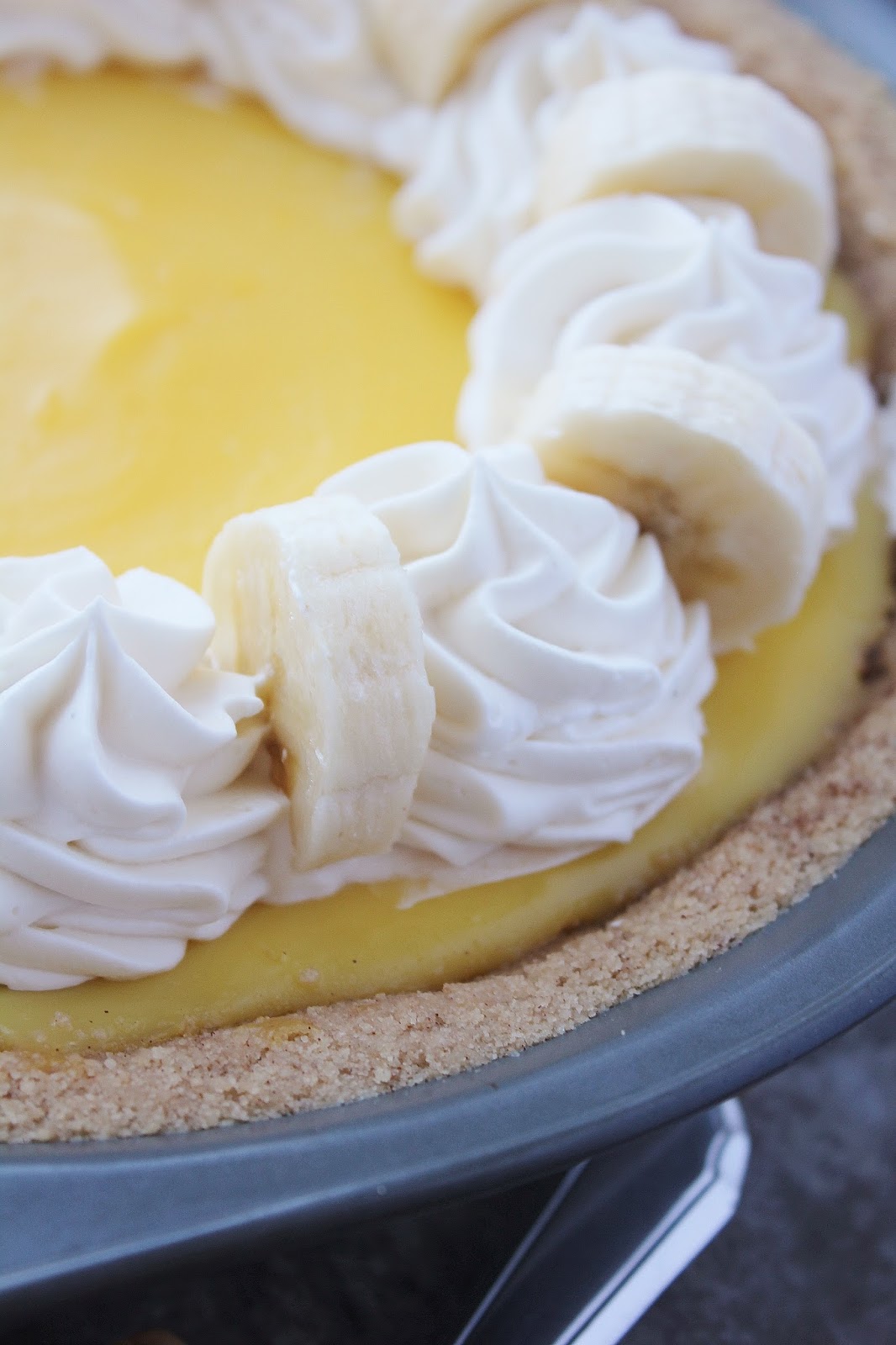 Pour the banana cream over the salted caramel, and chill for no more than 2 hours. If this pie sits for too long, the caramel and banana layer comes apart a little bit and things get crazy. The taste of this pie is worth this last little challenge, trust me. 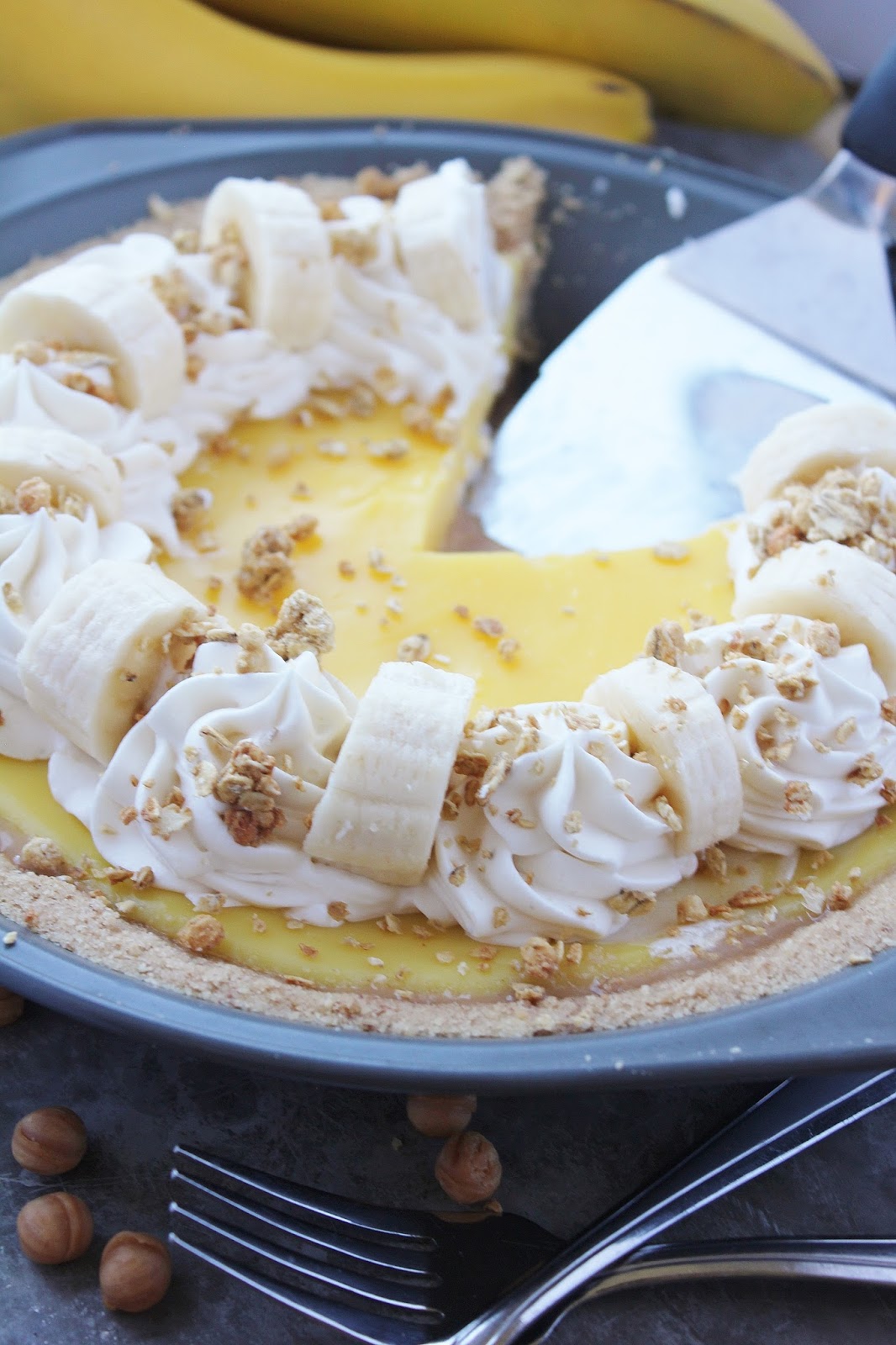 To top everything off, I swirled some whipped cream on top, added more banana slices, and for a little texture difference added a bit of granola crumble. The nuttiness tied in all the flavors beautifully. 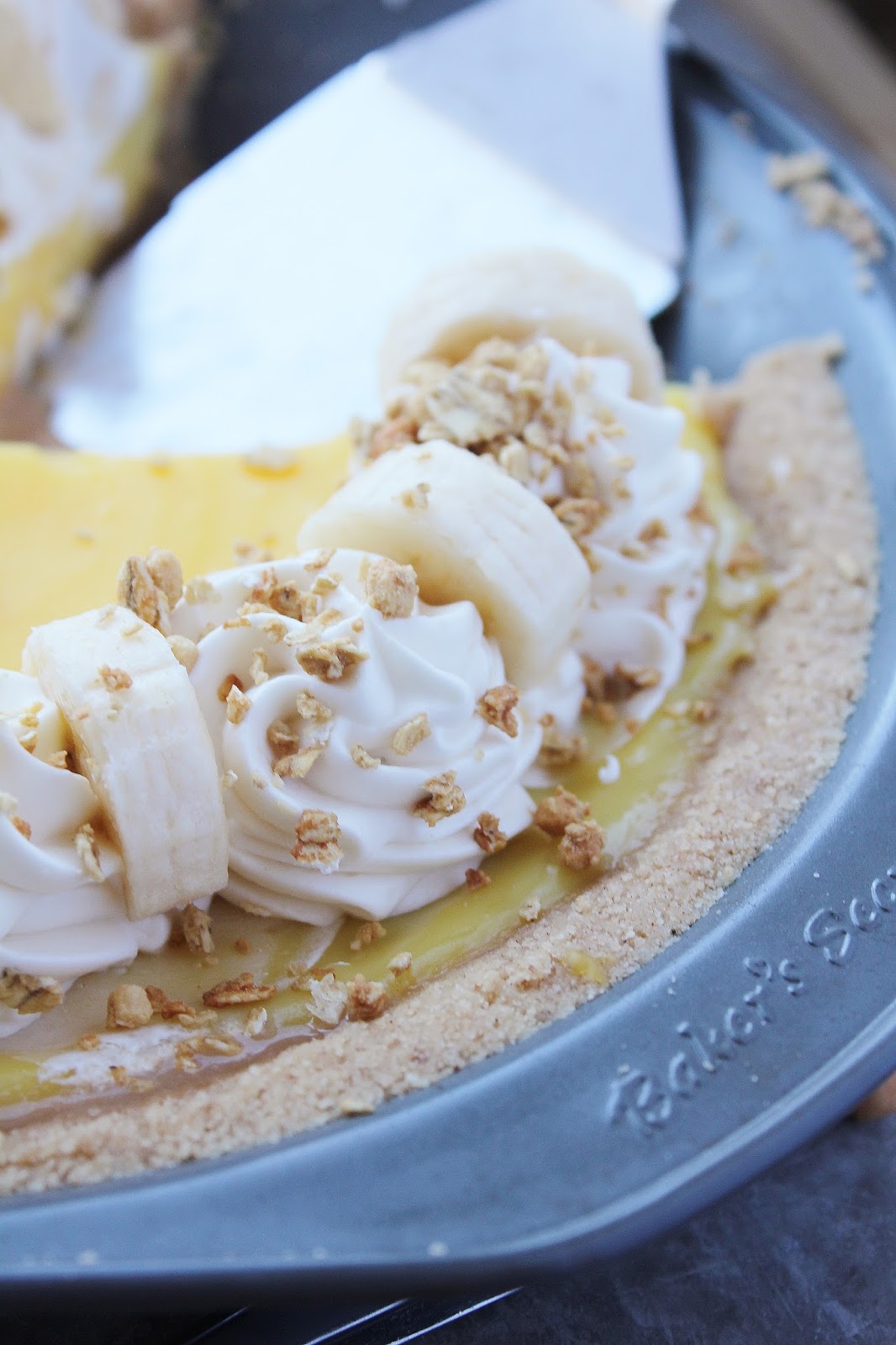 So if you're still on the hunt for a new signature go-to pie recipe for Thanksgiving, you can't go wrong with a little banana cream pie action 🍌 . Happy baking, friends! xoxo 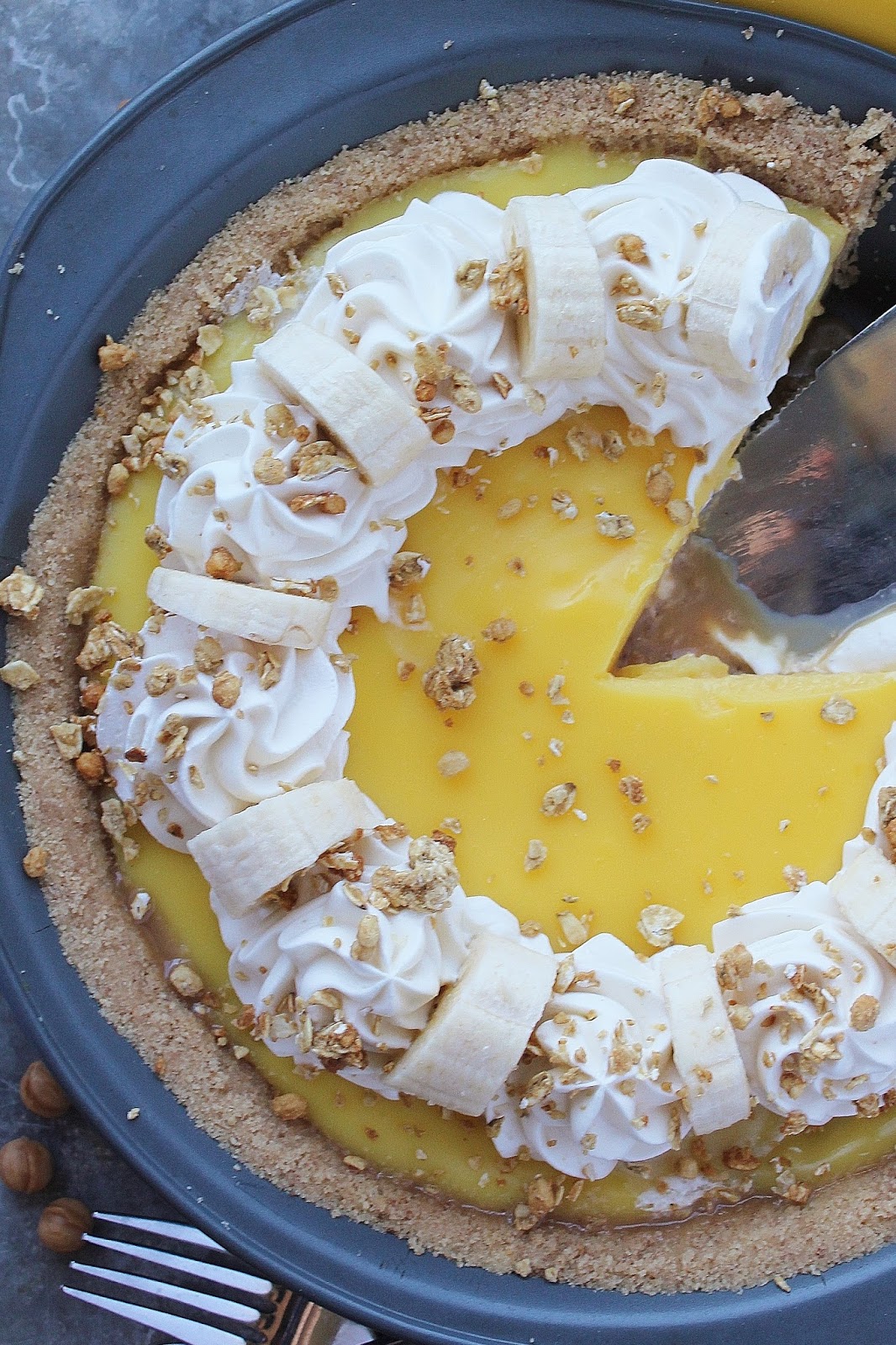 method:
1. Pulse cookies in a food processor until a fine crumble forms. Add in melted butter, and pulse a couple more times until a wet crumble forms. Press crust into a pie tin.
2. Add in banana slices in the bottom of the pie tin in a single row.
3. Melt caramels in the microwave until completely melted, slowly add in heavy cream (slowly so it doesn't seize in the caramel). Pour caramel over the bananas (not too much, just enough to cover the bananas).
4. To make the banana cream filling, whisk together the 2 pudding mixes and 2 cups of milk in a microwave safe bowl. Microwave for 6 minutes, stirring every minute, until thickened. Pour over caramel layer until the filling just reaches the edge of the pie. Refrigerate for 2 hours, then serve within a day or two. Enjoy!

*This post has been sponsored by Smiths Marketplace, but as always, all opinions and texts are my own.