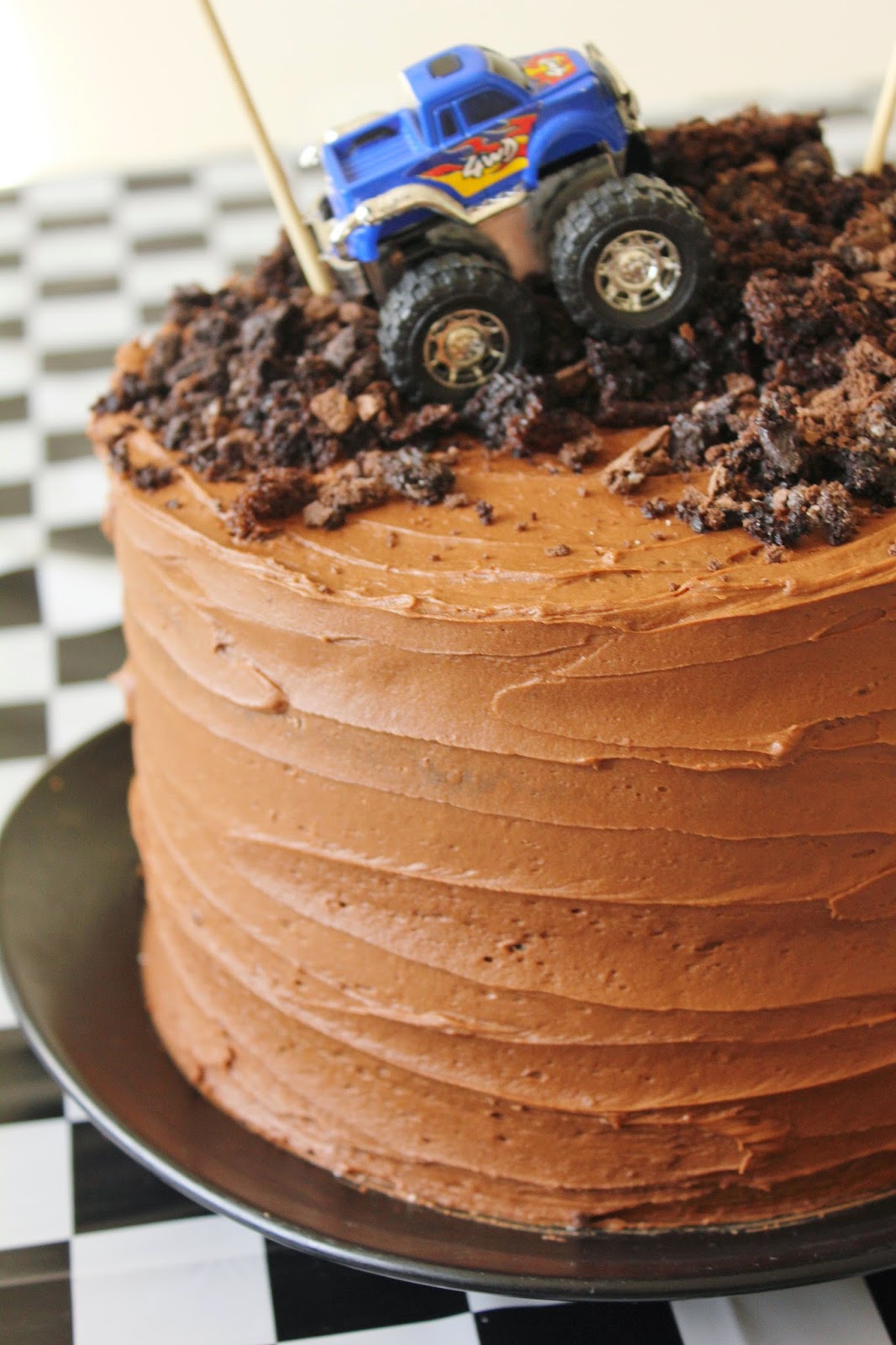 Happy Friday, everyone! I know we usually stick to desserts on Friday here on Baking with Blondie, but I thought it would be fun to share a few details from my son's birthday party we had this month!

I usually only try to share ONLY food recipes here on my blog, because I'm a firm believer in blogging about one thing, and blogging the crap out of it. If I spread myself over several different categories, things tend to get muddy, categories get ignored or lose quality, and tend to not have the best of the best delivered to your screens, I think. I mean, if I was an expert on EVERYTHING, sure, I'd blog about everything! Kudos to you fine bloggers who blog about everything and a bag of chips! But I like food, make food, share food, eat food, so here we are with a food blog. :)

However, I love sharing a little bit from the parties I throw for my son's birthdays. I love him more than anything, and making his birthdays extra special while he's so very young is a pleasure I treasure every year. I'm sure when more kids come along, they won't be as detailed or elaborate, but for now, we're going to milk it. For his first birthday, we did a Very Hungry Caterpillar Birthday Party and it was just the most darling little first birthday. I LOVE parties based on books, and Eric Carle simply can't be beat when it comes to beautiful photos and delicious pages filled with amazing fruits and veggies! Next, we did a party based on my son's favorite movie at the time: UP - his UP Birthday Party was a fun celebration of him becoming such a darling little toddler! Last year, we did the Pirate Birthday Party - and OH MAN was it a blast! We had everyone come dressed in pirate garb, went on a treasure hunt, and had the time of our lives!

This year we asked my son over and over what kind of birthday party he'd like to have. It was a long process, but eventually he chose to have a monster truck party (with a "cool car" birthday party as a close second). We'd been to the monster trucks out in the desert last year, and he still can't stop talking about it, so monster trucks were chosen as this year's theme!

This was our very first year doing a "friend" birthday party. Usually we have just family, but with over 35-40 people in our families living within 45 minutes of us, and our small two-room apartment well... small... we knew we'd have to rent out a place or be outside to fit everyone! March is kind of schizophrenic in Utah, so we chose to stay inside, and we chose to keep his party to his friends in our neighborhood (plus a few of the older cousins!).

The kids are still preschool age (3 & 4 years old), so I knew we had a crazy challenge ahead of us with nearly 10 kids invited. But looking back, it was THE BEST having them all run around, giggling, laughing, partying, and the look on my son's face made everything entirely worth the trip to crazy-town we took getting this party together. I simplified a lot of things, and incorporated a lot of age-appropriate games for the little ones to play. We had such a blast, and I was so happy with how low-maintenance it ended up being for Ryan and I to tackle on that fun Saturday afternoon. Let's jump in! 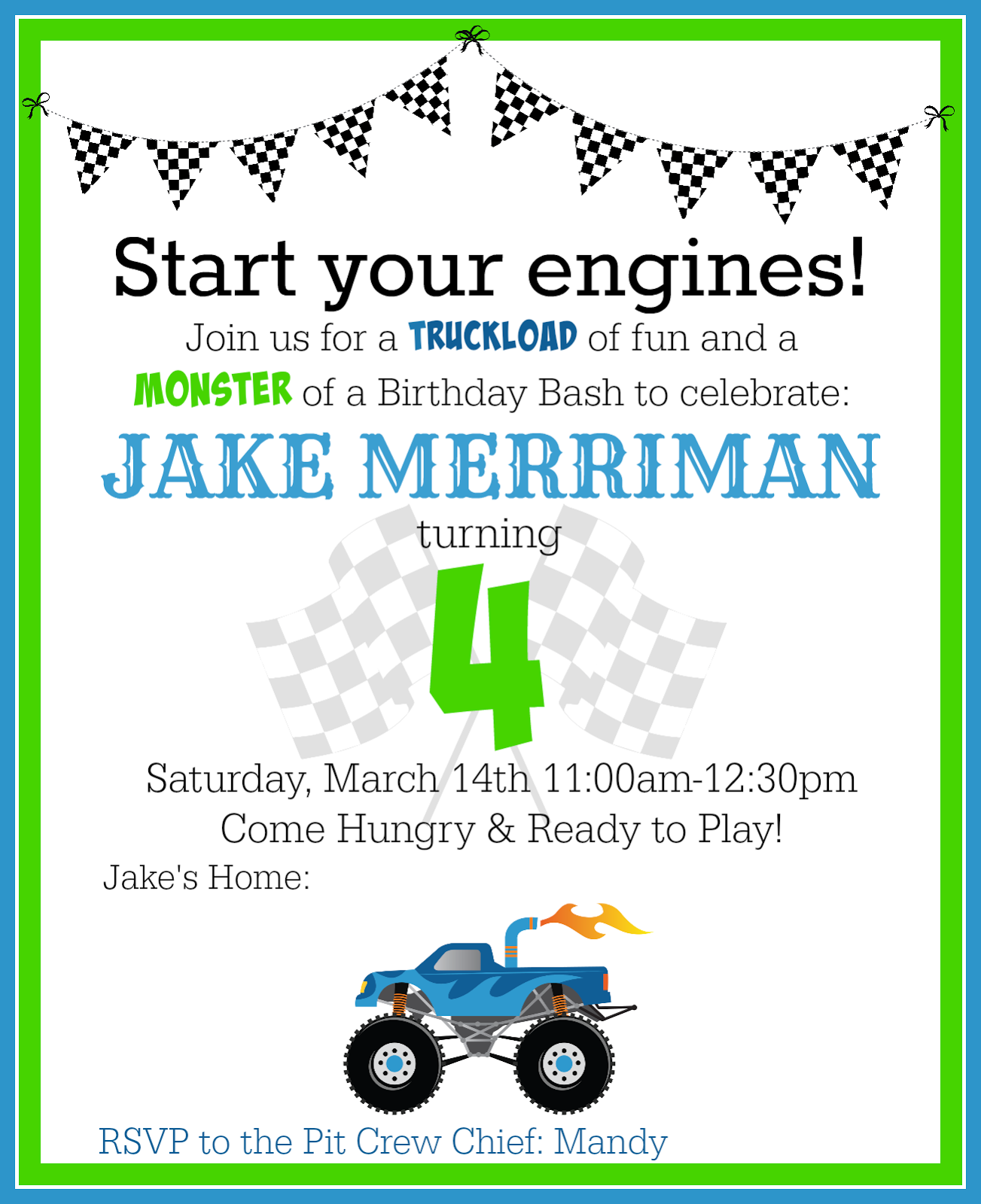 Yes, this is the first time I'm sharing my son's name on the blog. I've never mentioned it before, mostly because I'm super paranoid about everything. But with Ryan being an attorney, we will find and nuke your faces off if you even get any crazy ideas. Aight? Aight. :)

I designed the invites using PicMonkey, as I almost always do. It costed $1.86 to print them off at FedEx/Kinkos (our printer was out of color ink). Bam, done. Easy. I did, however, purchase the images from etsy to use on the invites (monster trucks/flags/etc) for pennies. It was nice to not have to design a monster truck for an hour for one image on an invite. 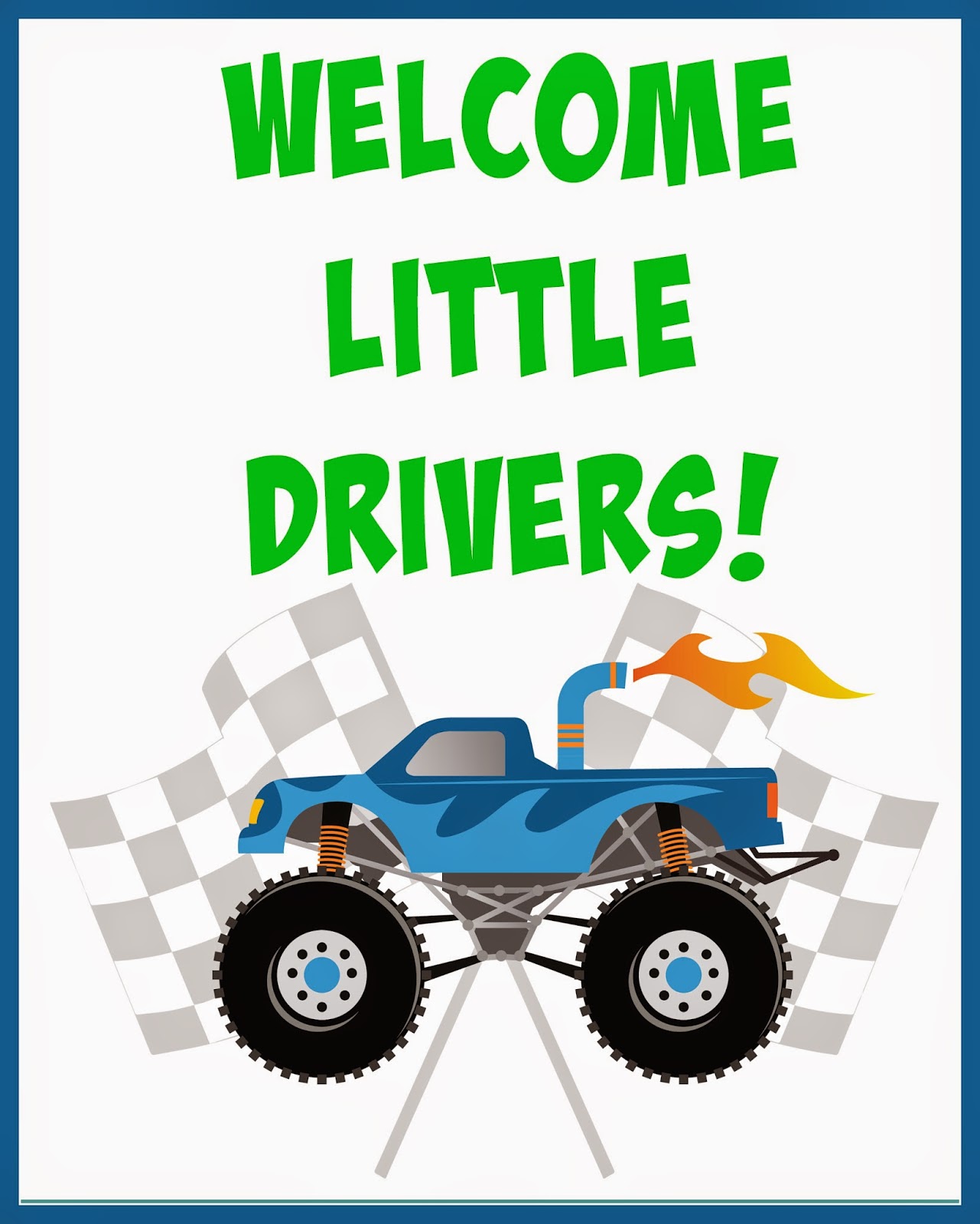 We live in an apartment complex, and there are tons of doors, so we made sure the little ones knew where the party was when they arrived! 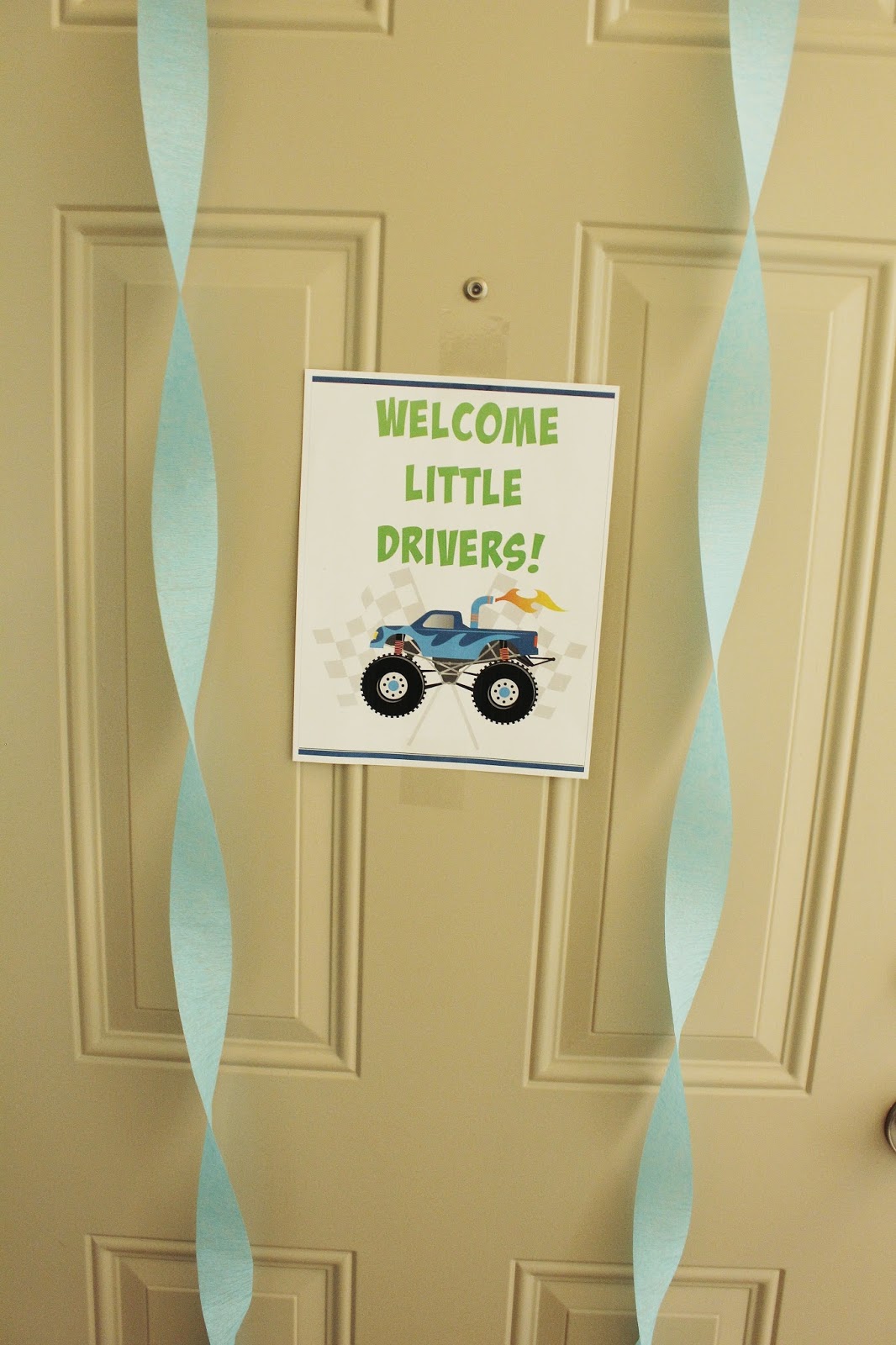 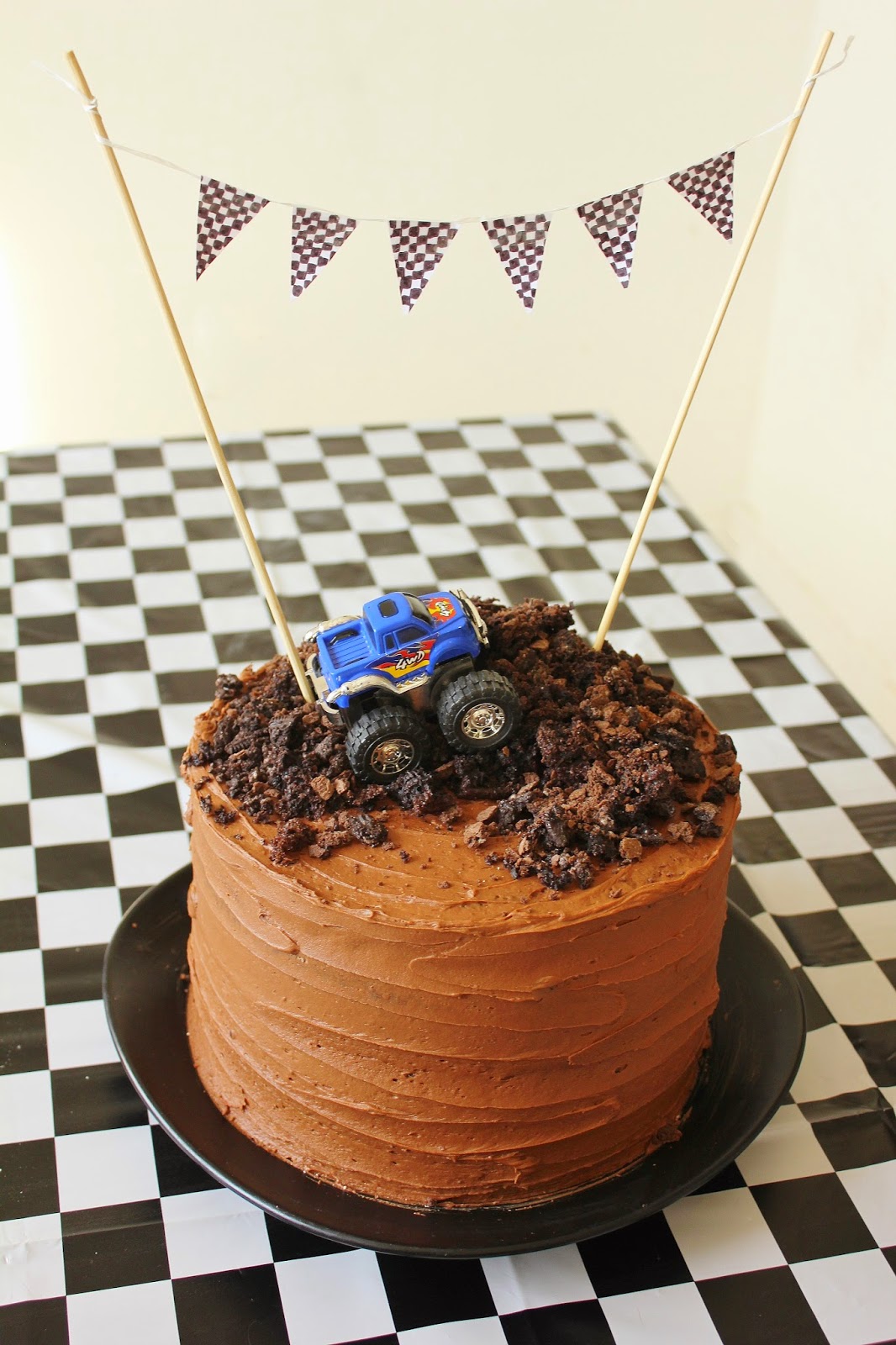 Next, the cake. I wasn't going to make a cake. So this was pretty last-minute. I always think eh, the kids will just have cupcakes and we can call it good. But I also am a firm believer in the fact that these little ones need a birthday cake on their birthdays! I make hundreds of cakes, and making one for my son is a super special honor. He wanted chocolate, so we took that idea and went for it. 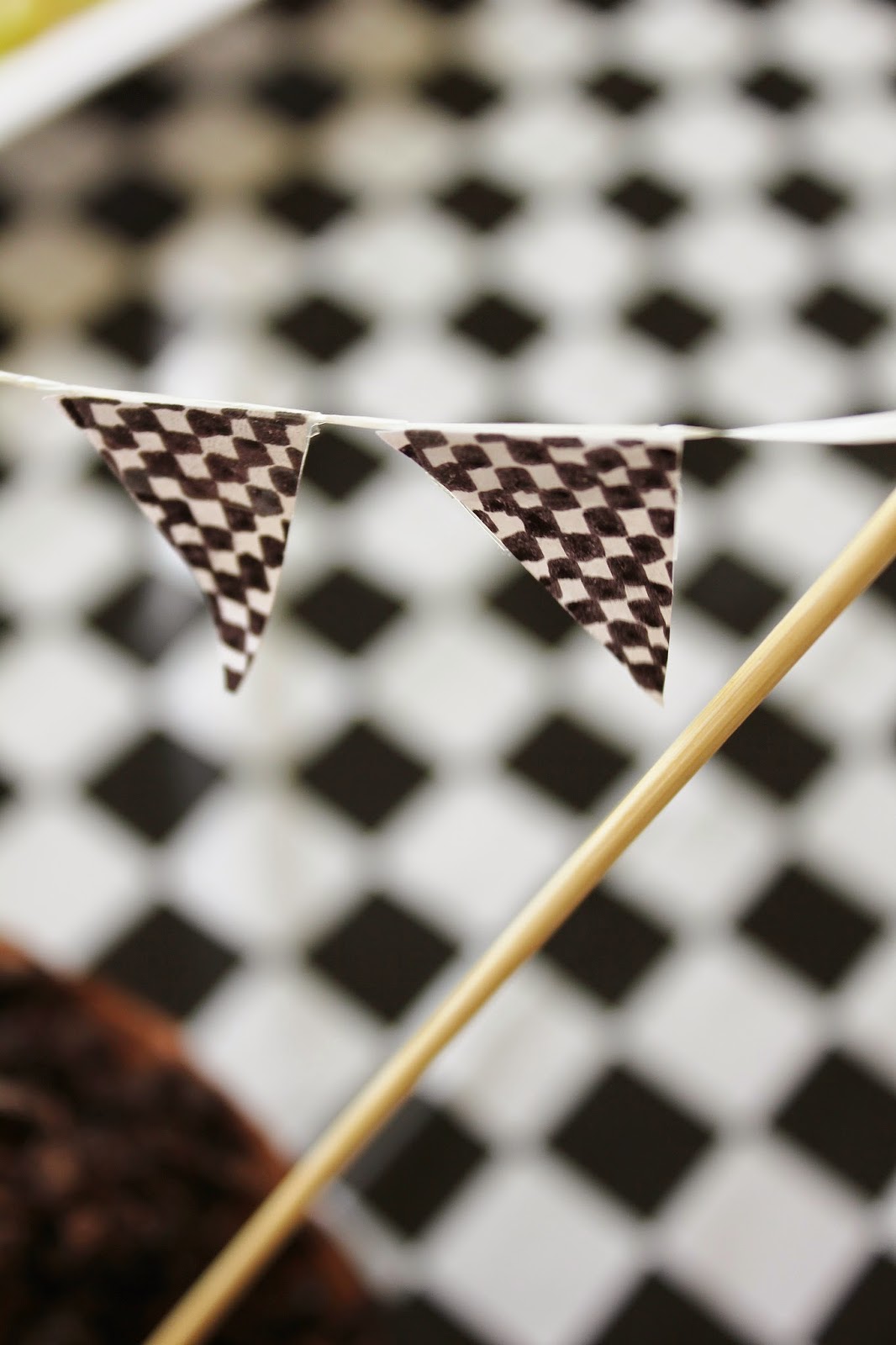 Yep. I drew the flags, cut them out, taped them to dental floss, and strung them up to kabob spears. We're super fancy over here, guys. 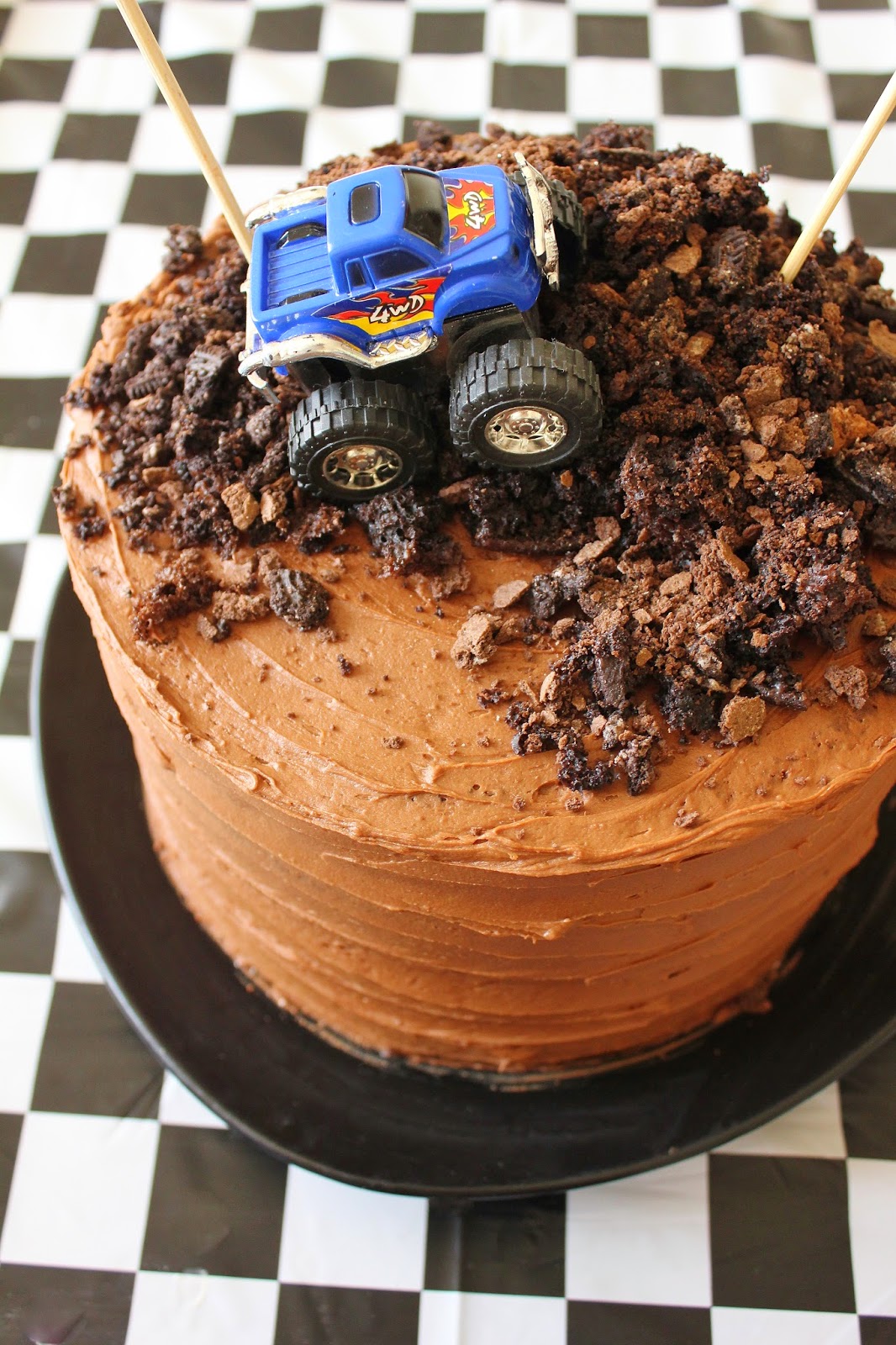 I had a couple leftover cupcakes leftover that didn't have frosting on them, so I smashed them up (gasp!!!) and spread them all over the top of the cake with crumbled oreos and crumbled chocolate graham crackers. It made for perfect muddy monster truck tracks! 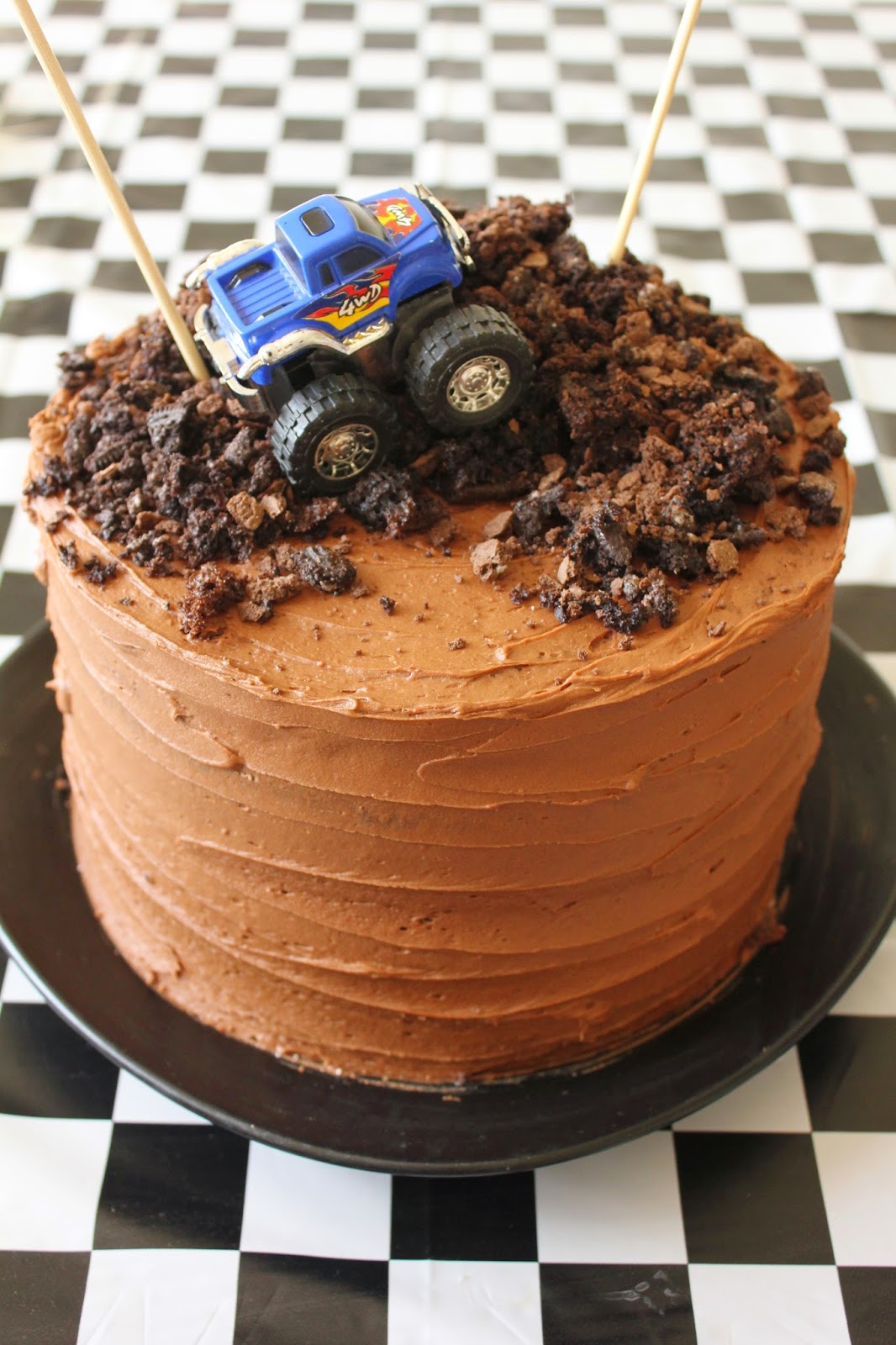 The inside is dark chocolate, and the frosting is my favorite cocoa buttercream. Lots of chocolate going on here for my little man! 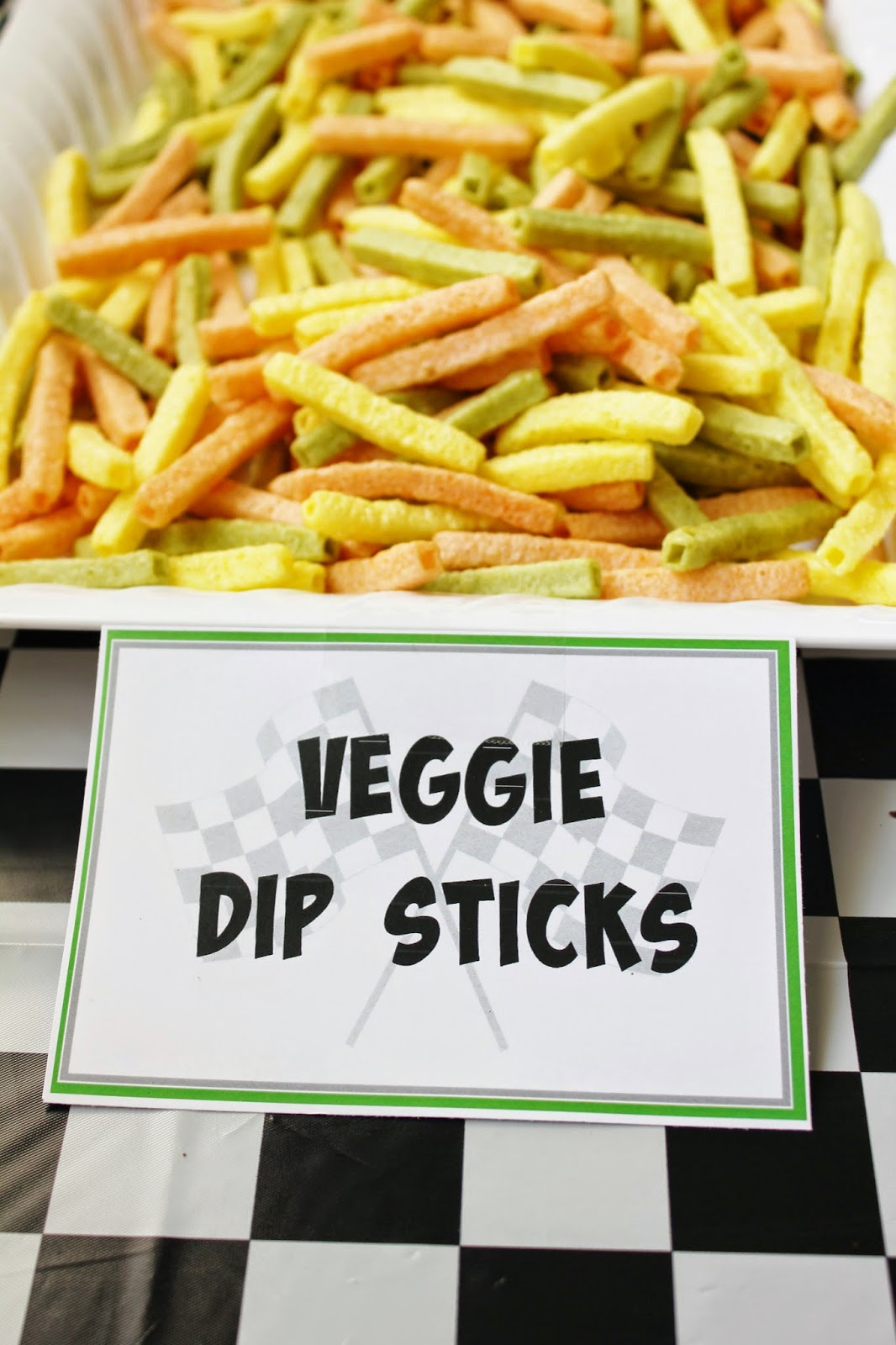 For the food, we went pretty simple. They are mostly a bunch of three-year olds, so I knew we'd be accommodating a bunch of different little pallets. We went simple with some pizza slices ("wheely good pizza"). Then we had some of these veggie sticks - some of Jake's favorite snacks! 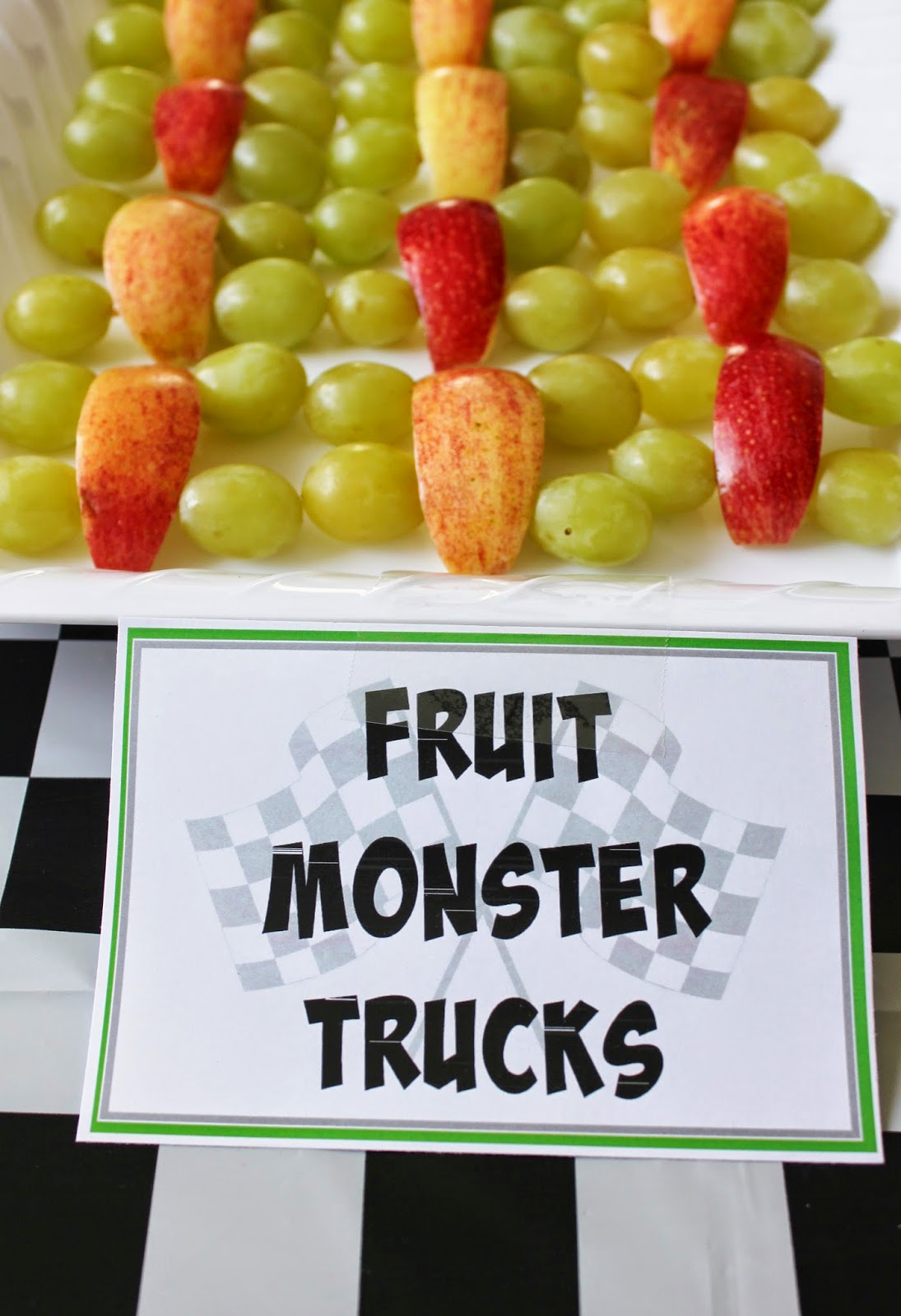 I loved these. They loved these. It was so fun to have these fruit monster trucks on their plates! We had to make sure they were careful around the toothpicks inside of them, but other than that, they were inhaled within minutes! 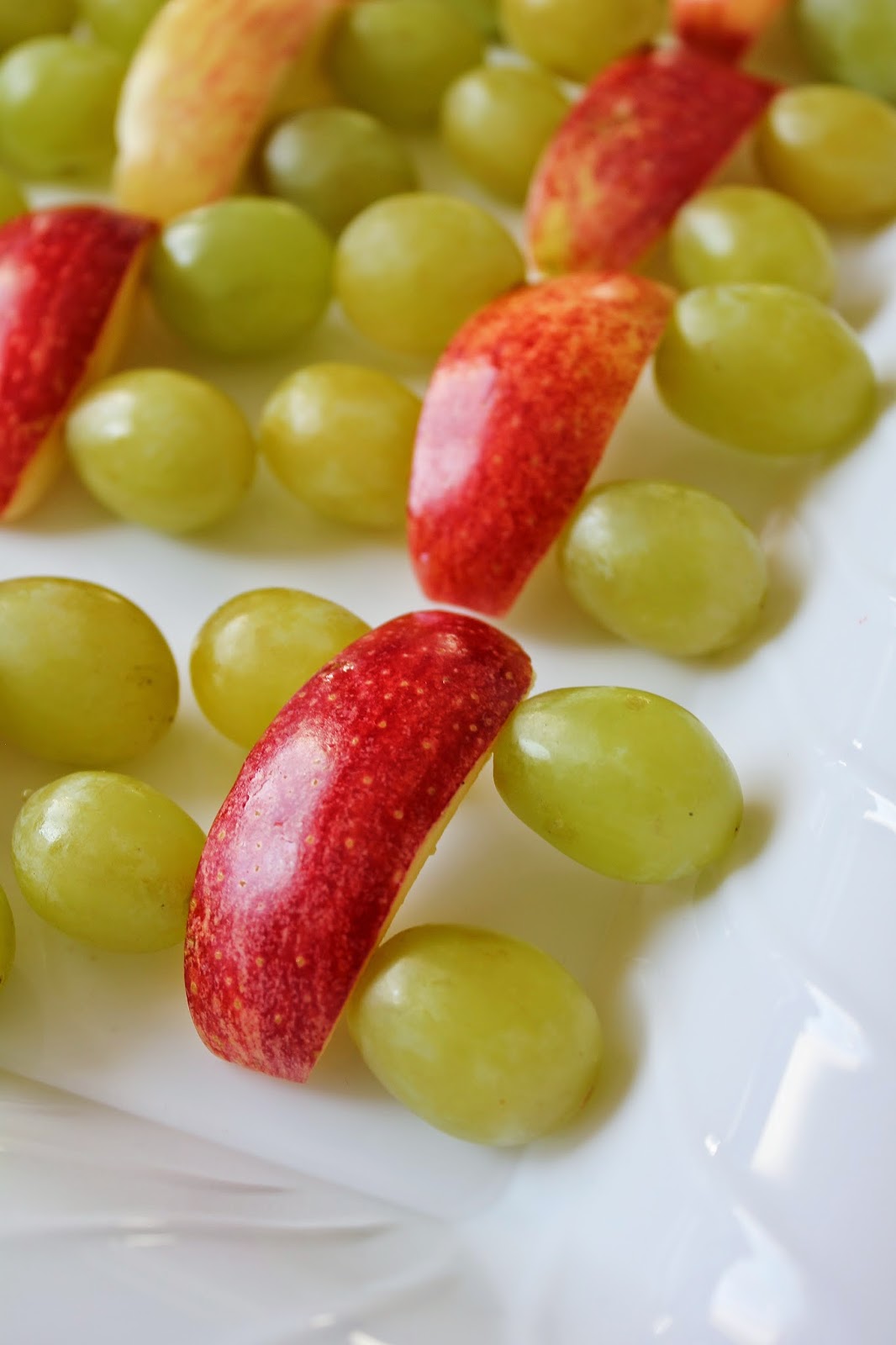 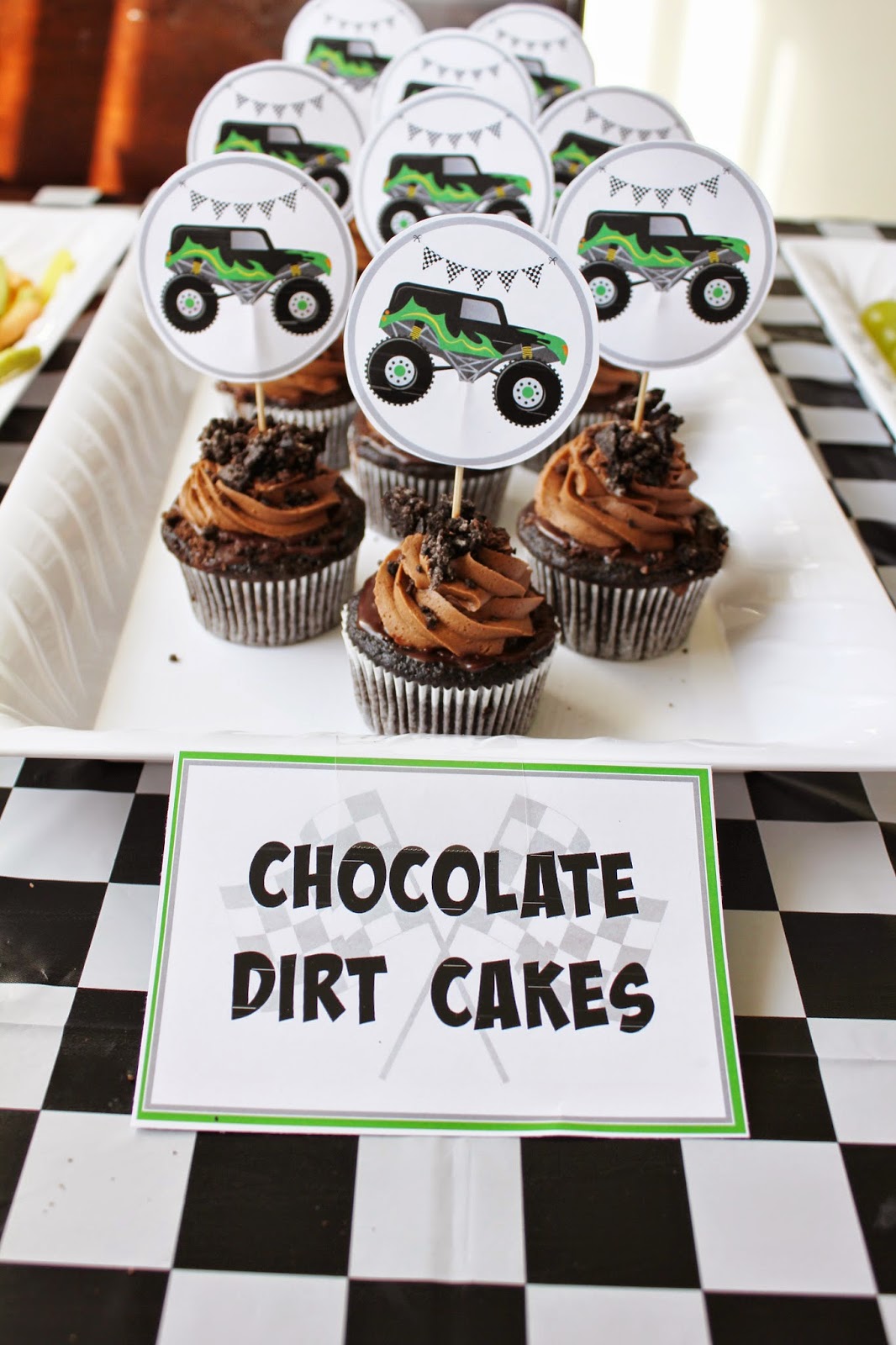 Chocolate cupcakes! These lucky little kiddos were able to munch on some of my favorite chocolate cupcakes I make. They were also inhaled in seconds. Most the frosting, but whatever. :) 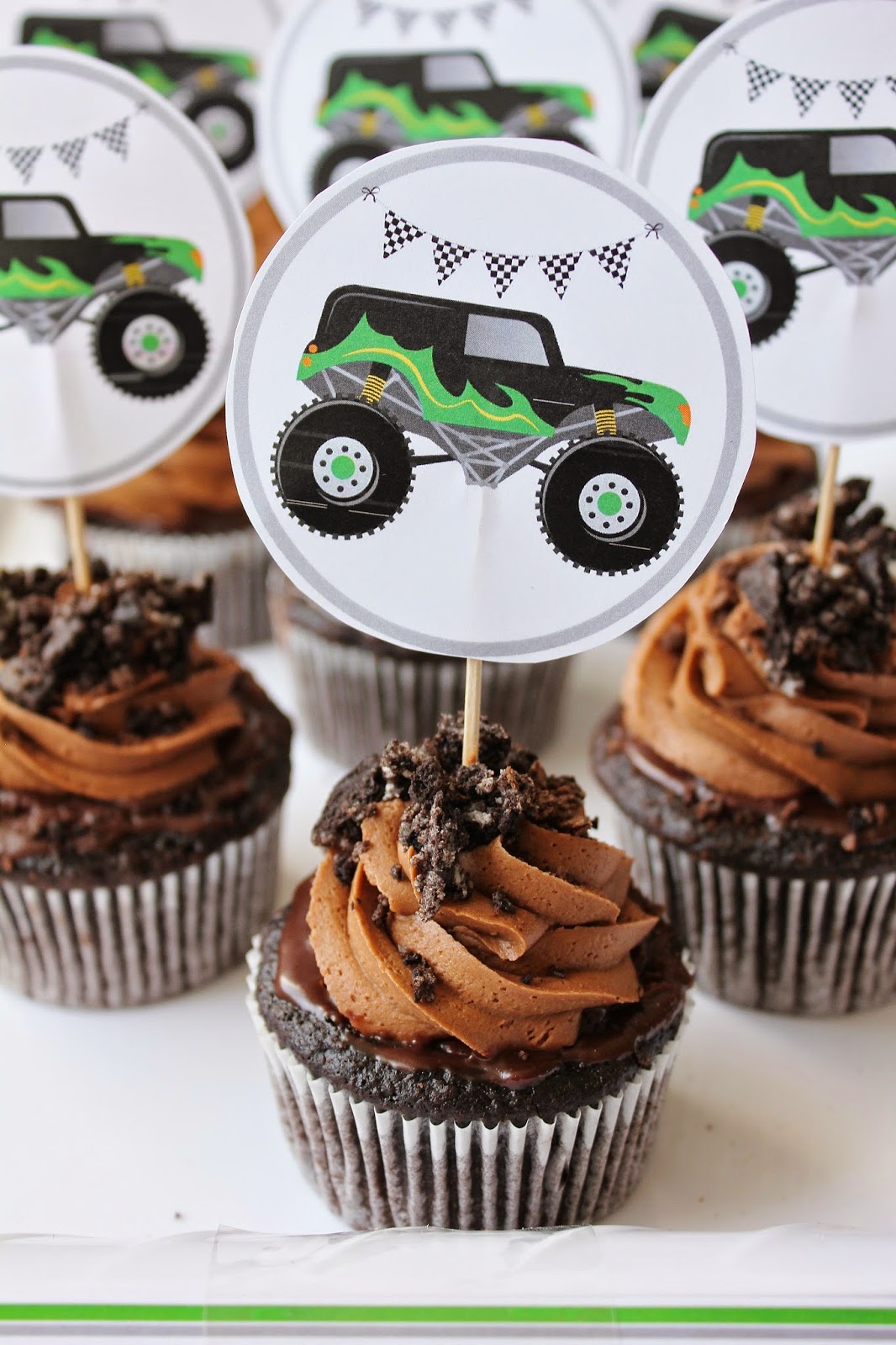 I designed the cupcake toppers, printed them out, and then taped on some toothpicks. Easy. Done and done! 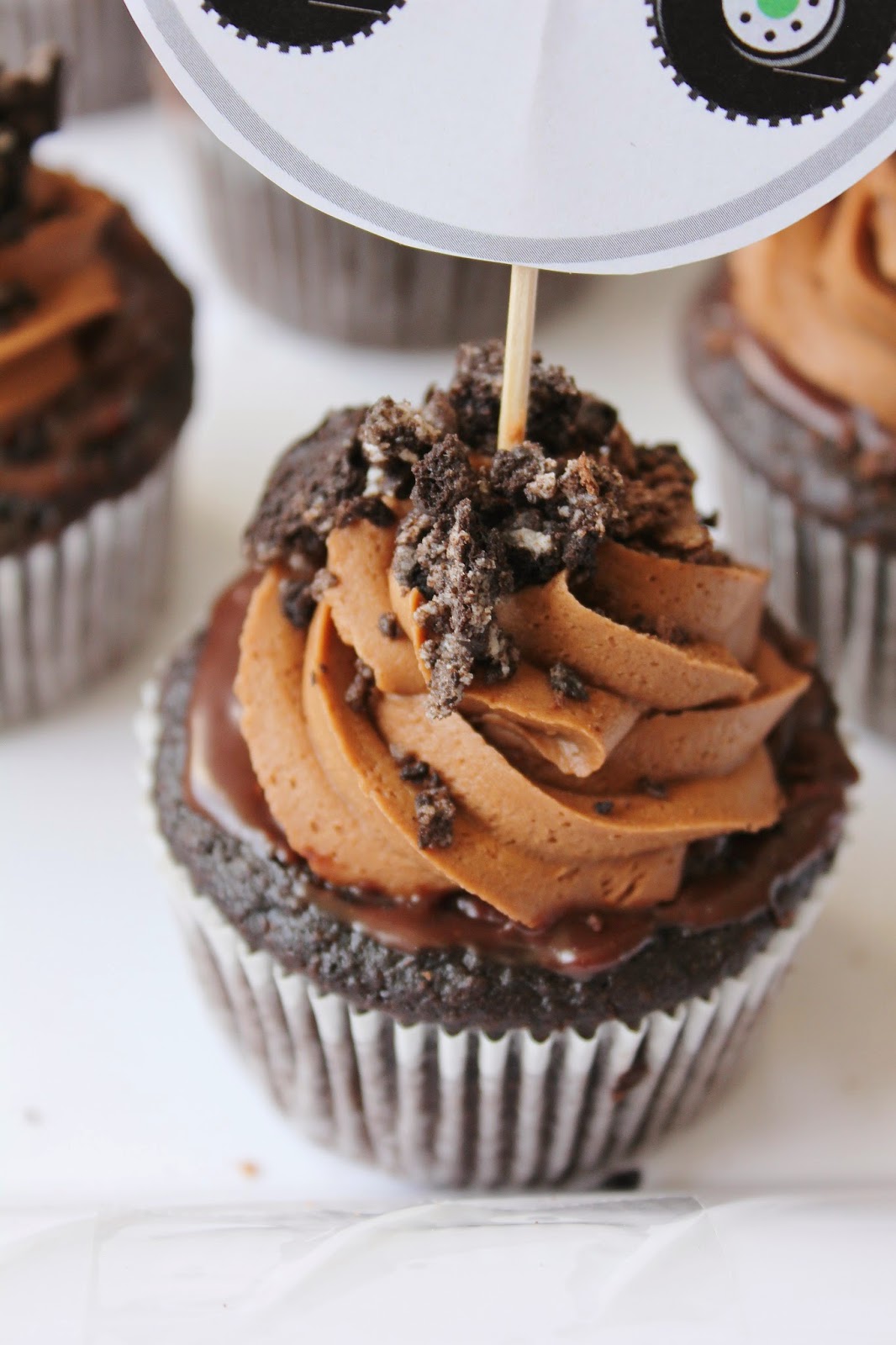 I added a layer of chocolate ganache to the cupcakes. This makes them even more ridiculous. Oh man, I still have dreams about these cupcakes! 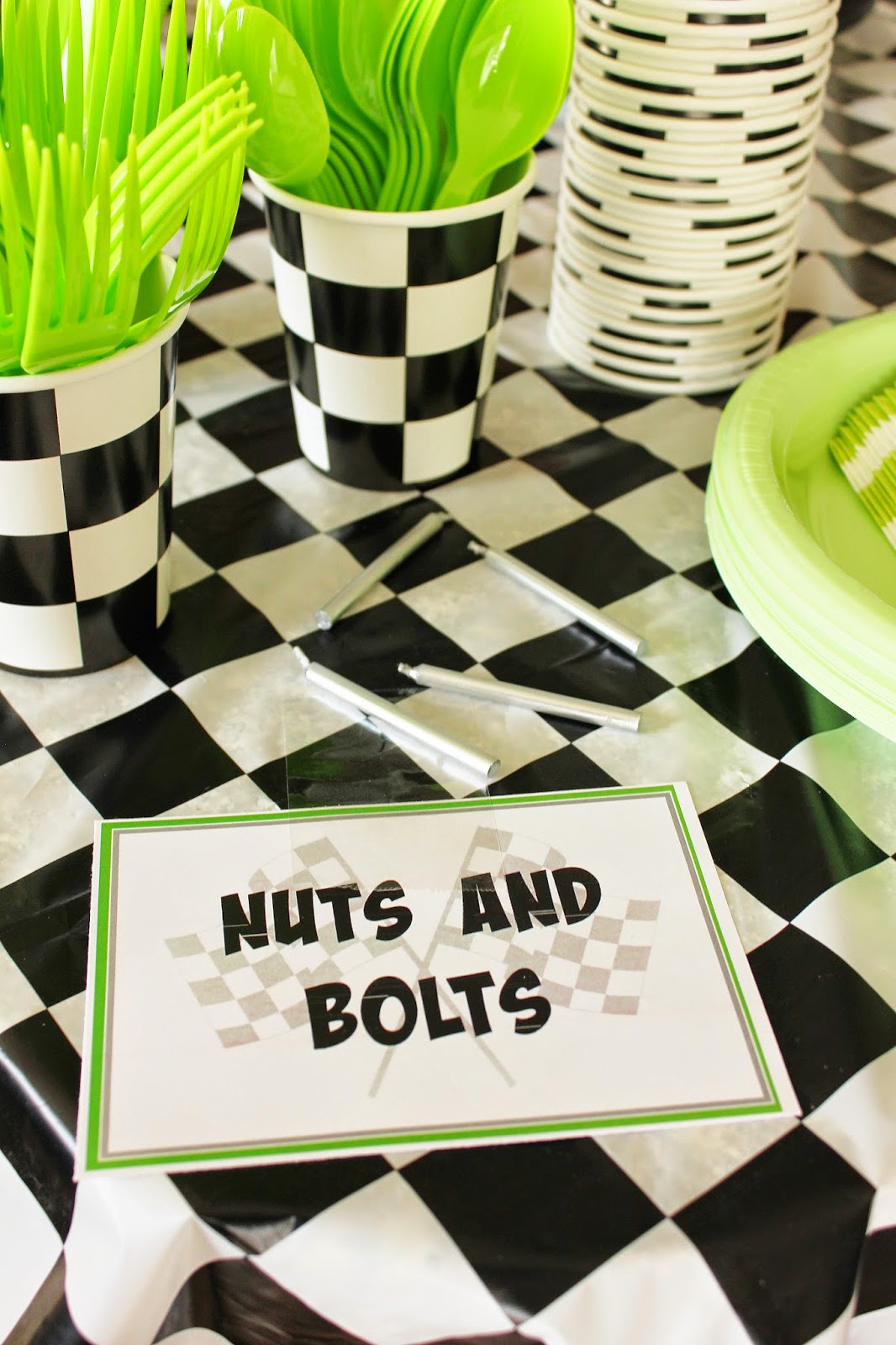 Joke's on me - we didn't even use these utensils. HAAAH. Blondie, right here. But they were awfully cute. We also had some of my son's favorite "chocolate mud" to drink (Tru Moo chocolate milk), and pink "anti-freeze" (strawberry-watermelon juice) to drink. It was super easy to just buy all the stuff at Target, Zurchers, and the dollar store to match everything. 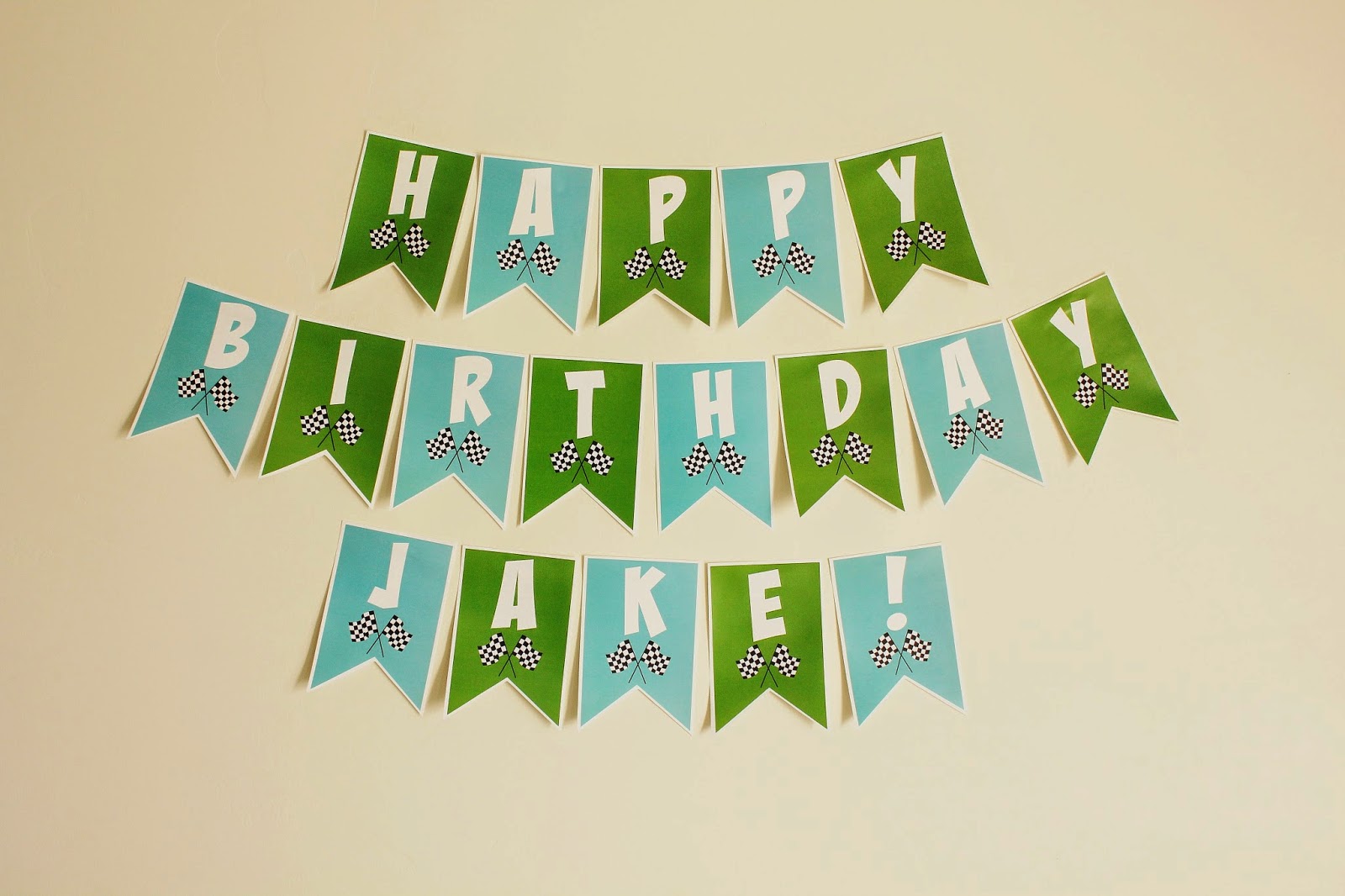 The banner! I always do a banner for his birthdays. I designed this using PicMonkey as well, and it was SO easy. Printed them out, cut them out, taped them up, banner done! 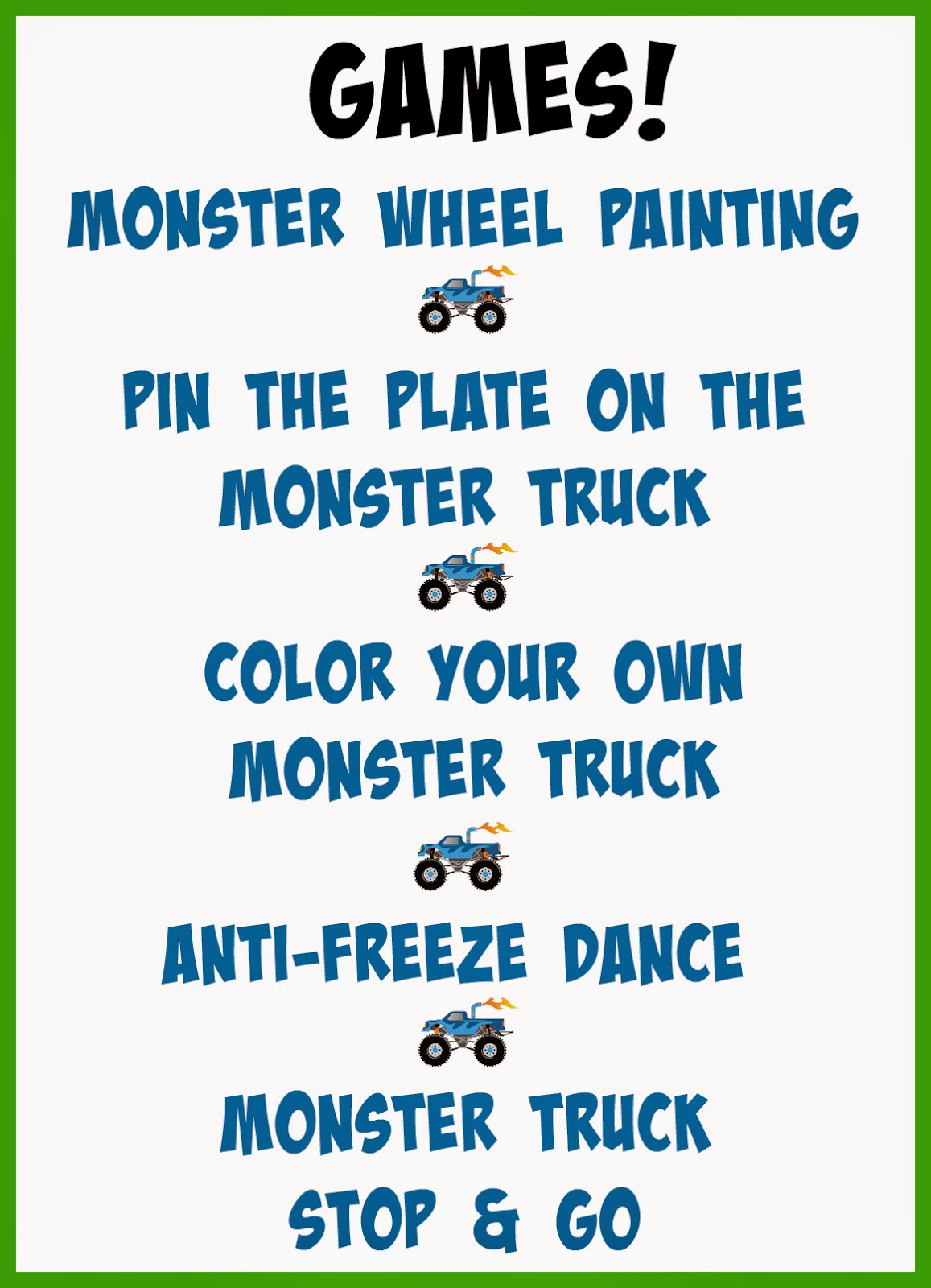 I've never really had to do a bunch of games for a party before, because we've mostly had all-adults at his birthday parties. But for this one I knew we'd need to do some heavy entertaining for these three-year olds! My son loves art, so we did some art-heavy activities at his party. 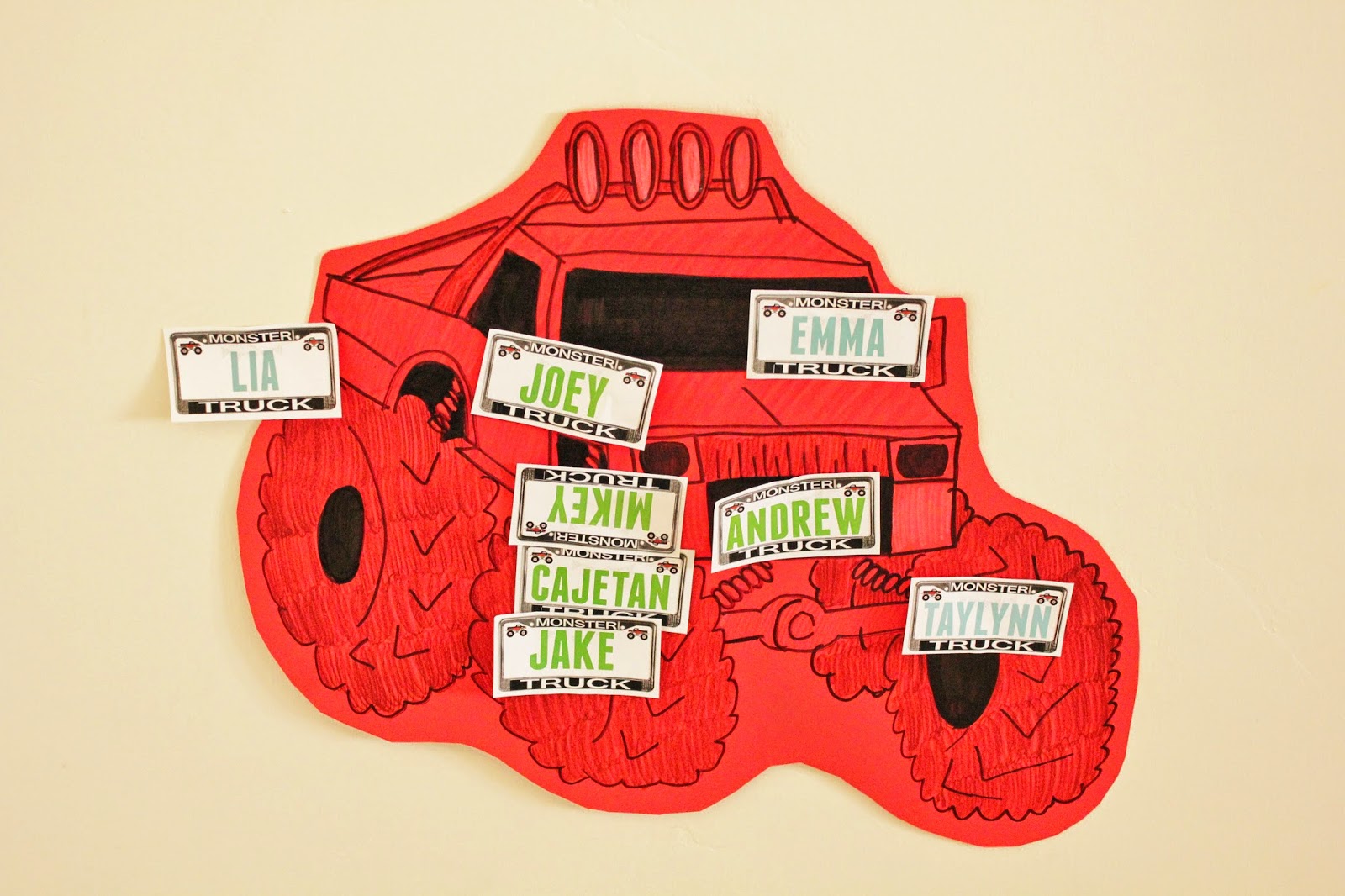 Okay, close your eyes, I had to free-hand this little devil for the party the night before at midnight because I almost forgot about it! Yikes! But it worked for it's one purpose: Pin the Plate on the Monster Truck. The kids did really well - especially the 7-year old cousin. ;) 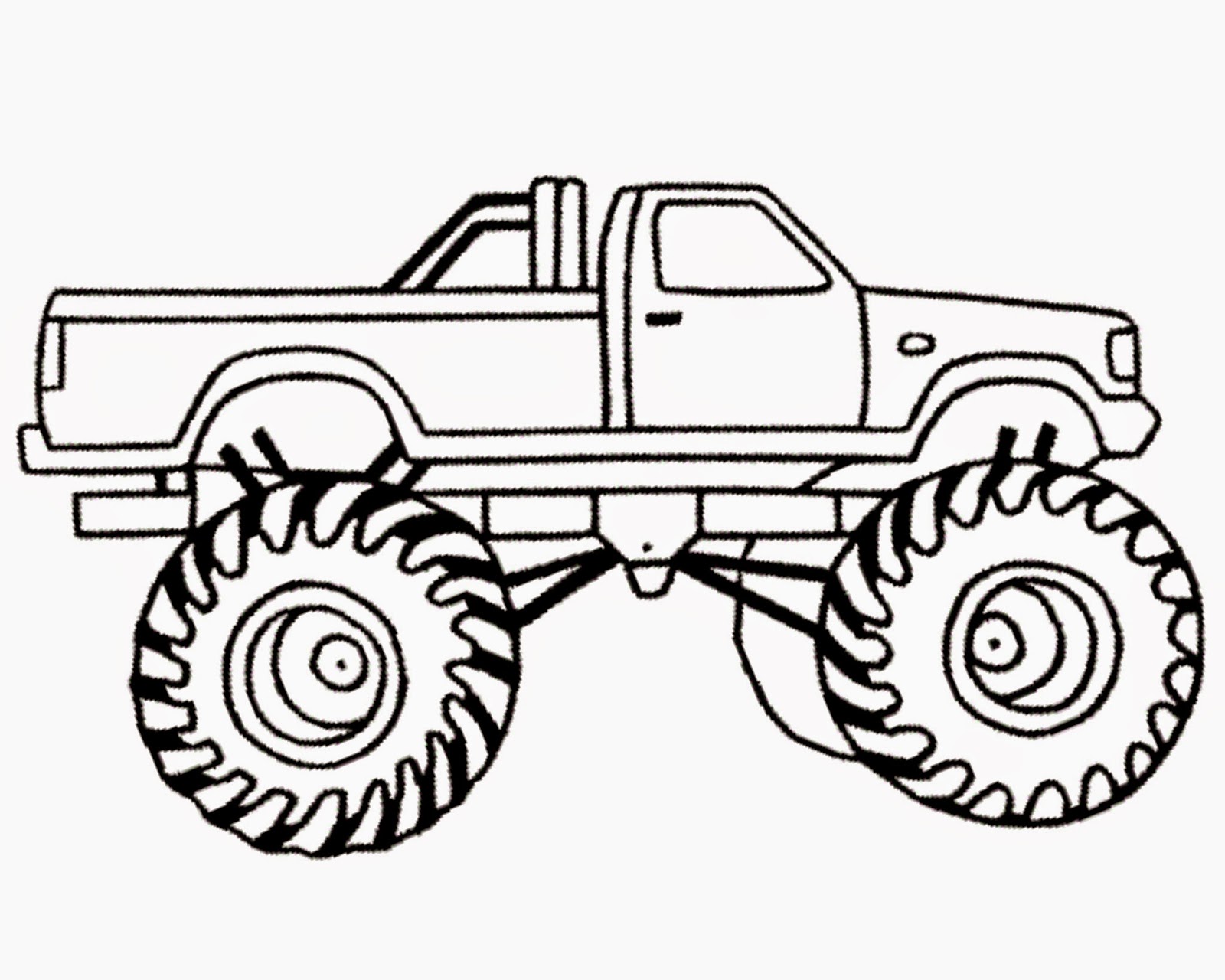 Next, I had them color their very own monster truck. My son loves to color, so we handed the kids their own monster truck above, and a pile of crayons for them all to color like crazy for a while. 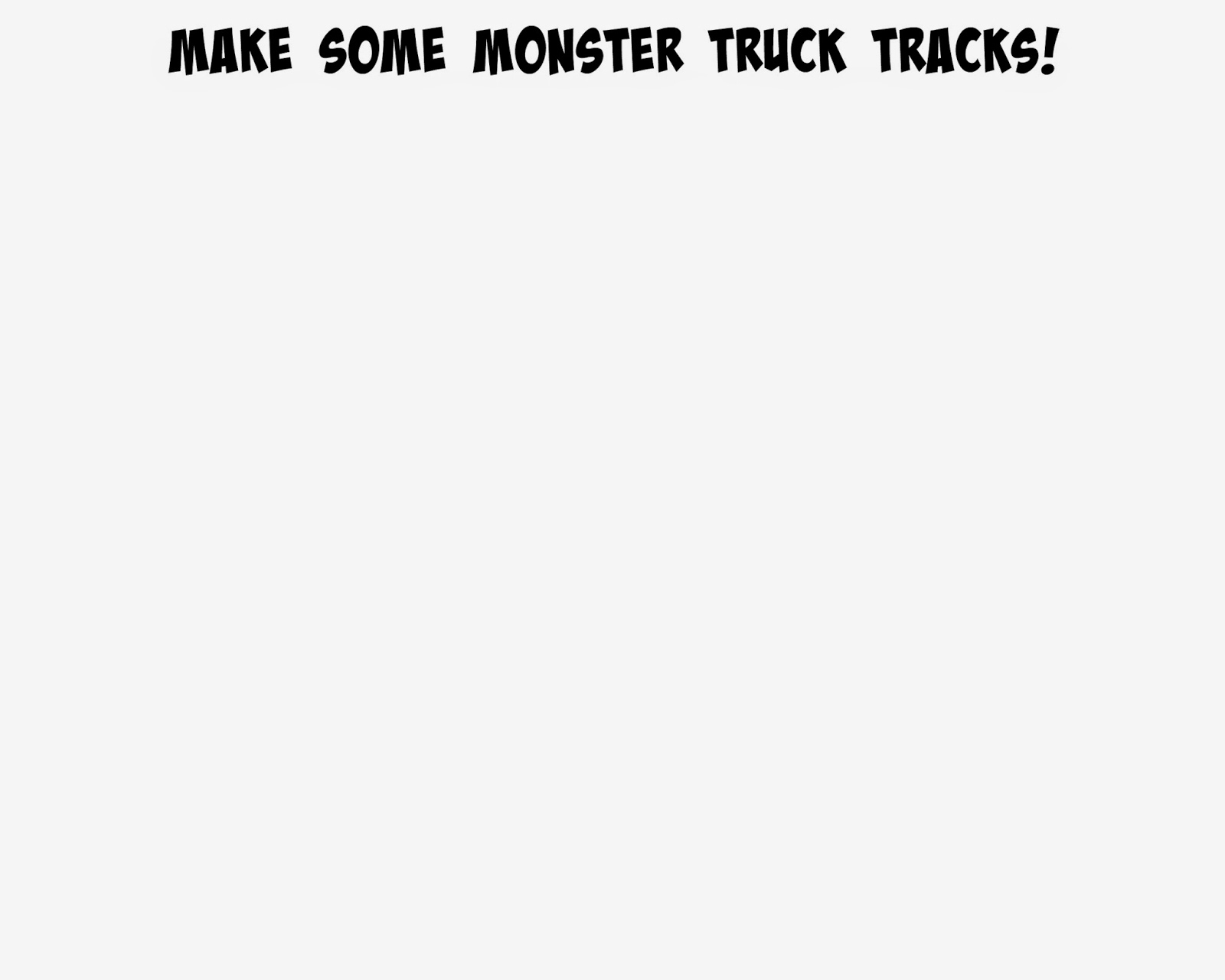 Next, all the kids were given their own monster truck to use to "paint" with the tires and paint on their own papers (above). It was easier to have a plate for each kid, with a squirt of the primary colors on each plate. We put one of Ryan's old shirts on each of the kids to keep their clothes from getting paint all over them, spread out a big blanket on the ground (our table only has four chairs, so fitting 9 kids on there would have been crazy) and let the kids go crazy with the paint and monster truck wheels! 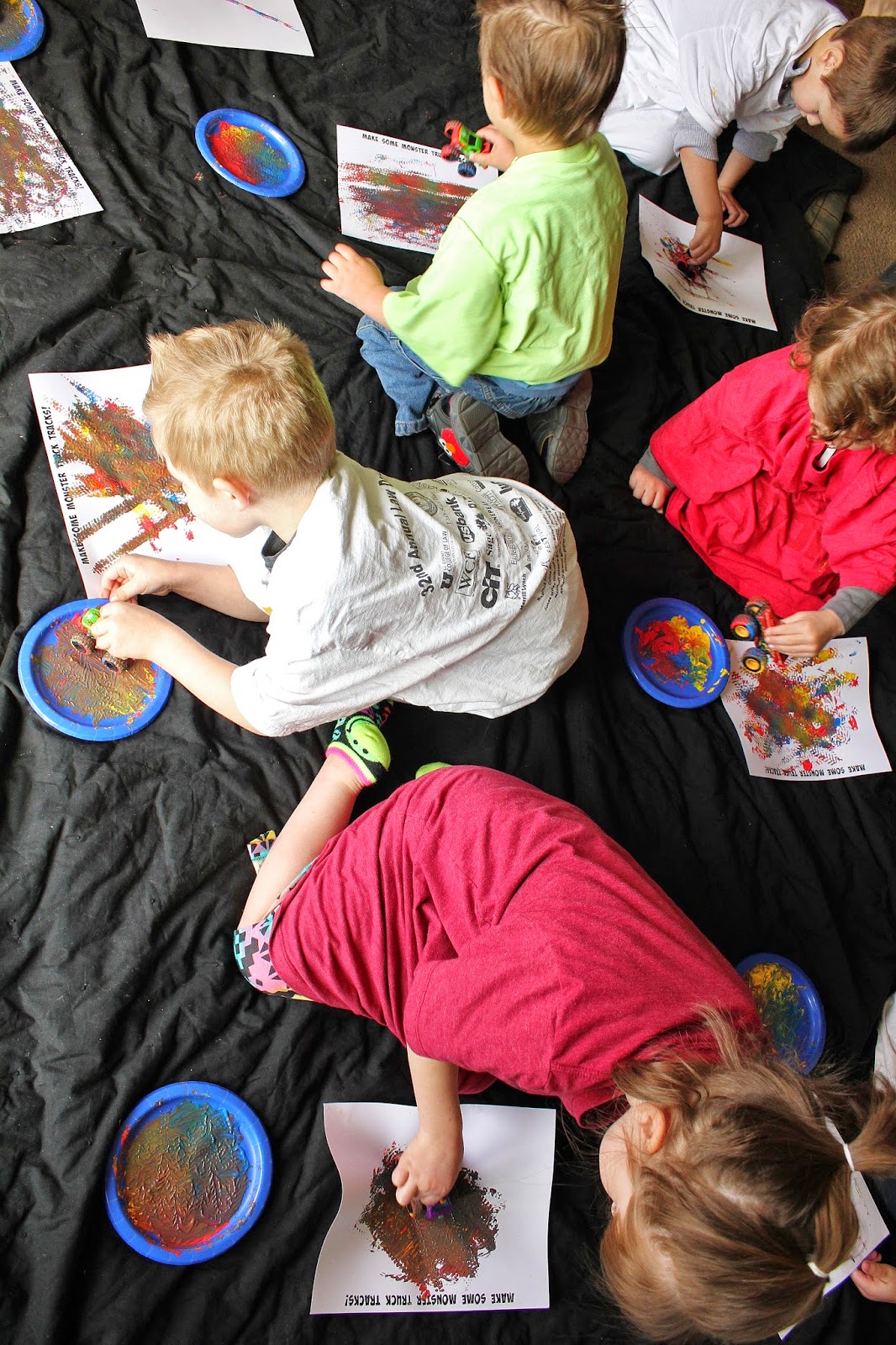 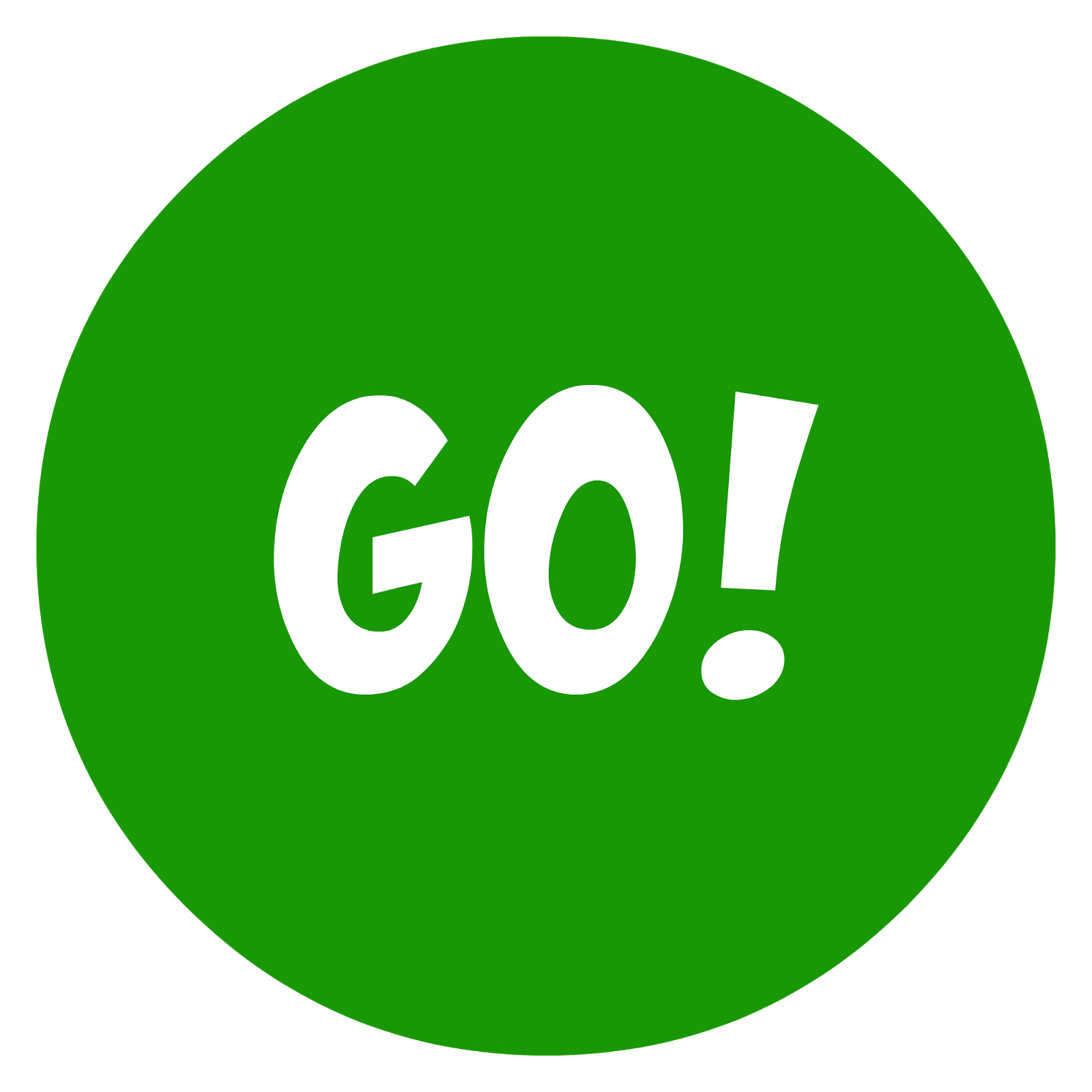 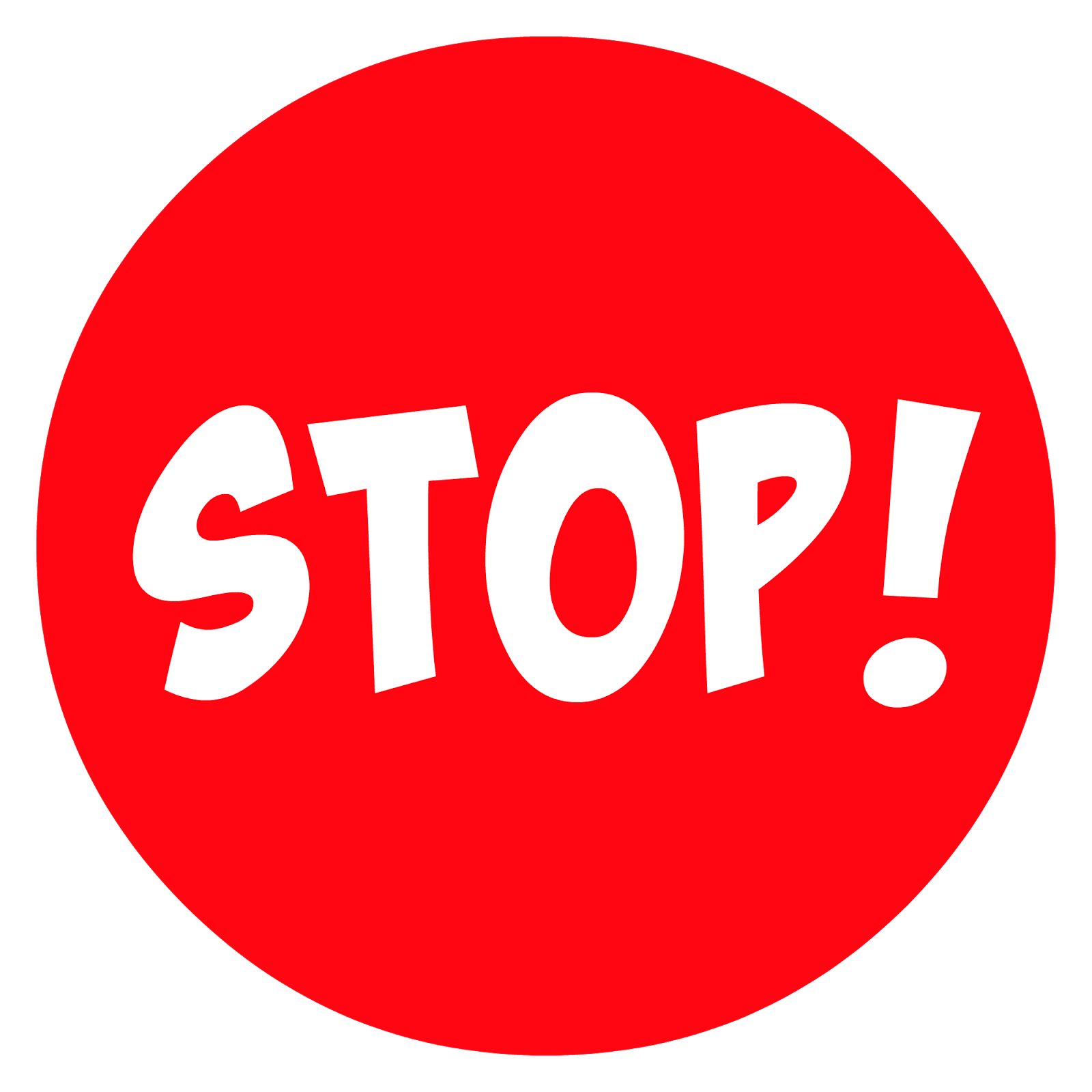 We ran out of time before playing STOP and GO - we were going to go outside to the field and let the kids run around a bit with the stop and go sign game. I remember playing this game when I was little, and I thought the concept was easy enough for the little ones to understand.

We also had a "freeze dance party" - er... "anti-freeze" dance party where we played the music and the kids could run and dance, but they had to freeze when the music stopped. I think they had the funnest time ever with this one. So many crazy little ones running around. I thought it would be chaos, but it was just so darling to see them all so happy! 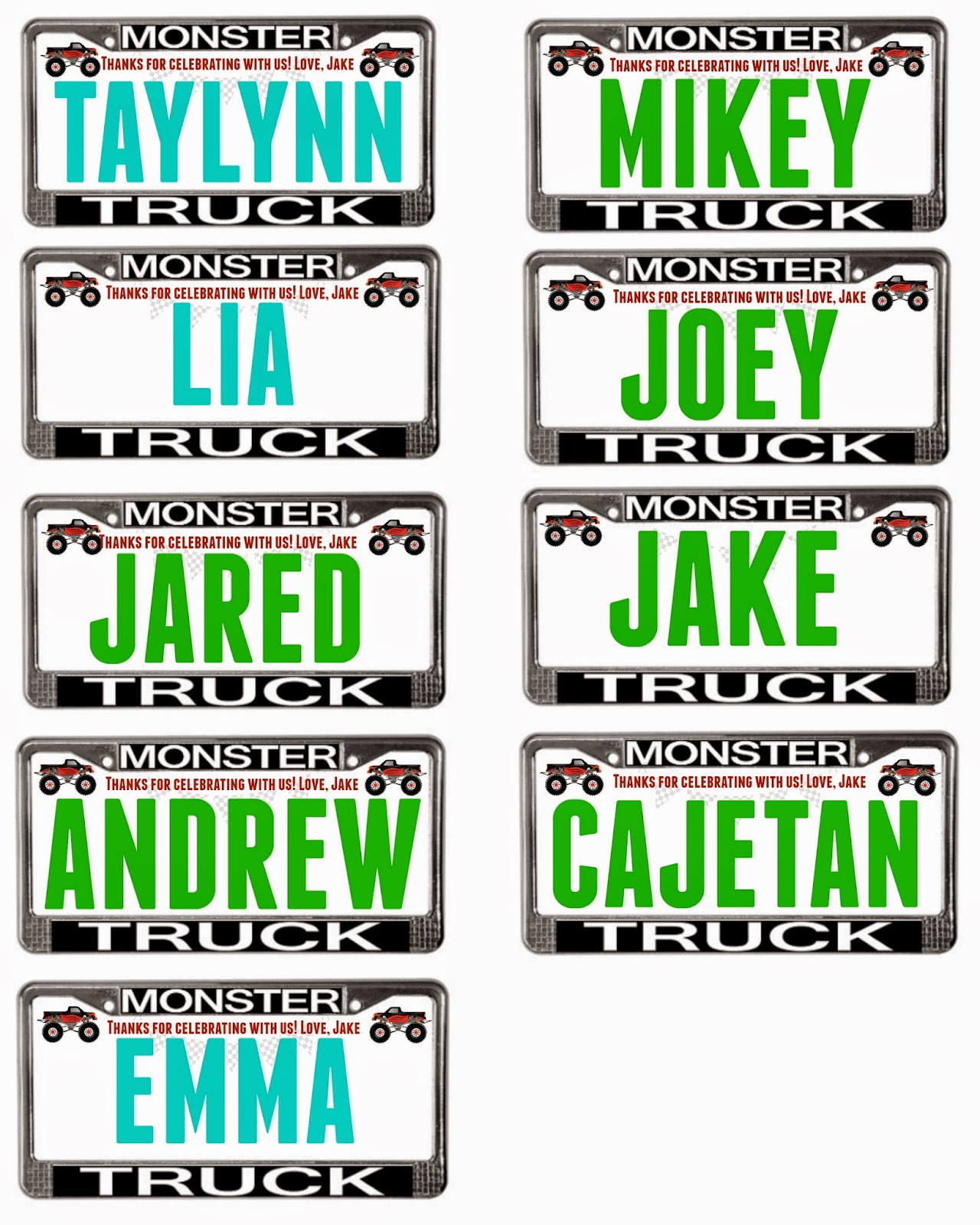 For "goodie bags" when they left, we gave each kid a couple of packages of sixlets (some of my son's favorite), a little monster truck car, and their own balloon to take home! It was pretty simple, but then again, I think this was the first birthday party without adults there for all of them, so we kept things simple and easy. They loved them, and especially loved being able to take home a balloon! Well, that's it. His monster truck party came and went pretty quickly. It may seem like a lot, but this was MUCH smaller than the parties we've thrown him before. I loved having the friends and older cousins over for it, and I know for sure our son had the greatest time of his life anyway! Until next year, party-lovers!