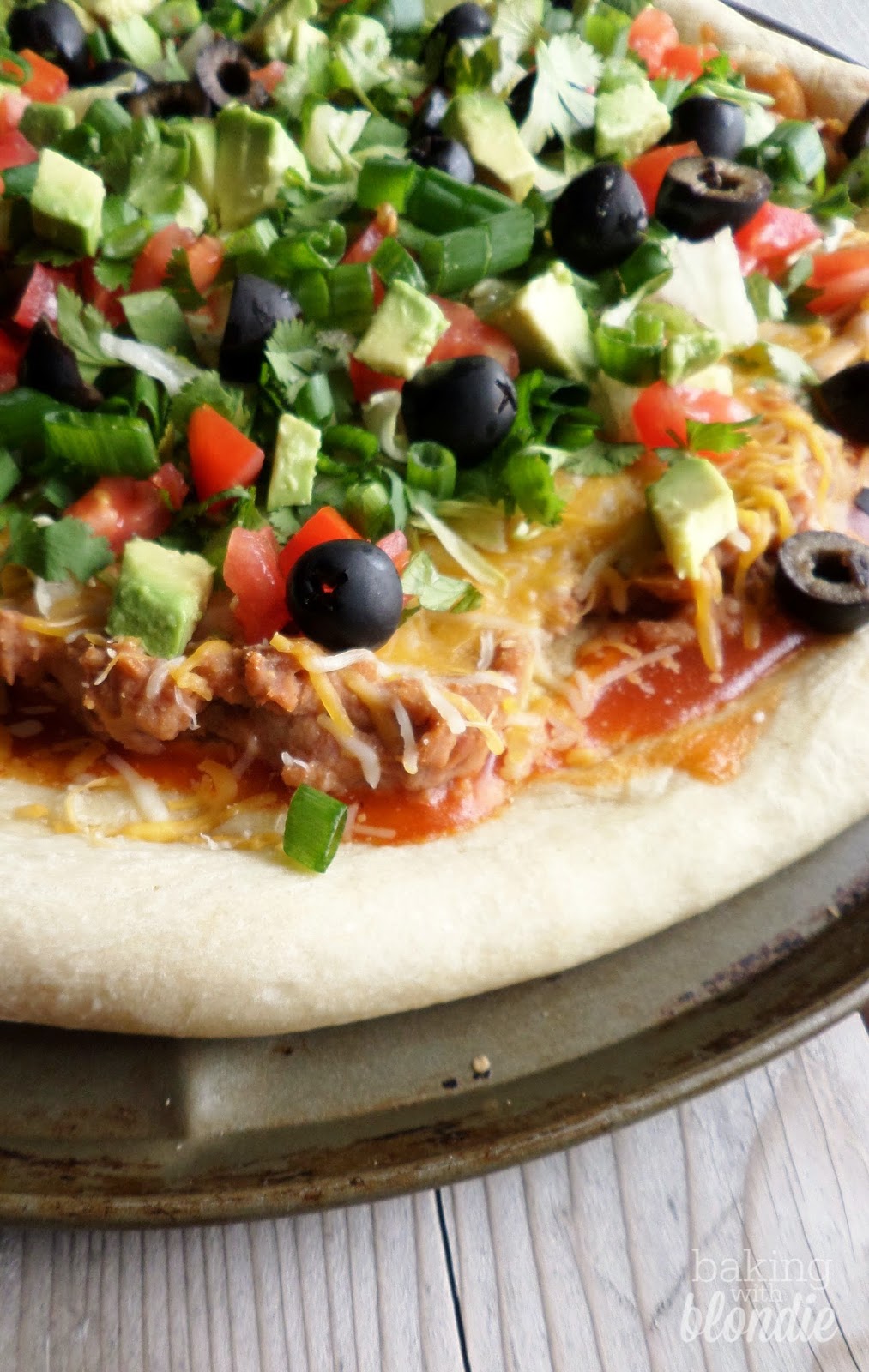 My Mom used to make enchiladas all the time.

I say that as if she doesn't make them anymore. She probably still does, but I'm just not around at dinnertime enough to know. When I was a little girl, I loved to watch her make enchiladas. She always had a bag of tortilla chips around when she was assembling, and I would always sneak a chip or two and dunk it right into the enchilada sauce. The contrast of the mild crispy tortilla chips and the deep red spicy sauce was something I couldn't get enough of - I may have double-dunked a few times. Or triple dunked...

Eh, we all had our shots, and got sick maybe once a year, but let's not get off-subject here...


My love for Mexican food tends to bleed into several meals I make during the week. Ryan can always tell what type of food I was craving when I made the grocery list by what we end up having for dinners that week. For this particular week, I was craving deep red enchilada sauce, creamy refried beans, melty cheeses, corn tortillas, all the goodness you'd stuff into a taco, and um... pizza apparently. That last one was kind of random. But we can be flexible when it comes to dinnertime. Might as well throw them all in the same dish, right? Or in our case, the same pizza pan!

I hid something a little sneaky in this particular taco pizza. I love the taste of corn tortillas, so I layered a few of those delicious circles of goodness over the spread of refried beans, and topped it off with that gooey enchilada sauce and melty cheese. It added another layer of crunch and texture, and I think you're going to just love it! Enjoy, and make sure to come back on Sunday for a little surprise :)

You're not going to want to miss out on this one :) 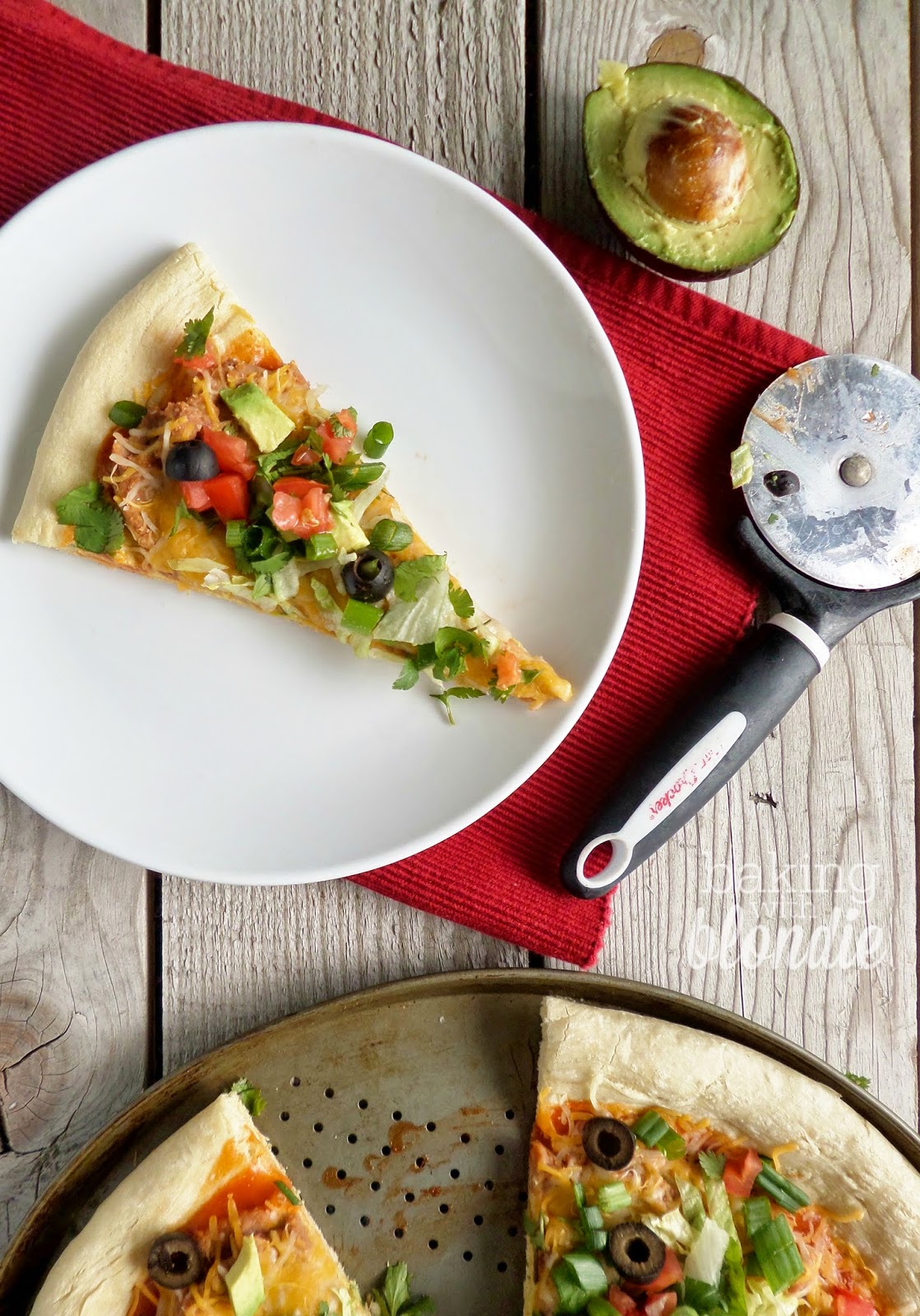 method:
1. Prep the dough: Combine the water and yeast in a mixing bowl, and stir to dissolve the yeast. Let sit for only a couple minutes. Add the flour and salt to the bowl and mix until a rough dough forms. With the paddle attachment on medium-low, knead until all the flour is incorporated, and the dough is smooth and elastic, about 5 minutes. If it's still sticky, add a little more flour. Transfer to a greased bowl, and cover with a clean towel. Set in a warm place until you're finished making the sauce and prepping the toppings.
2. Prep the toppings: Make sure all the toppings are prepped.
3. Make the pizza: Preheat oven to 400 degrees. Grease 2 smaller pizza pans, or one large pizza pan. Roll out pizza dough on pans with a rolling pin until it reaches about 1/4 inch thickness, leaving a small edge raised around the edges for the crust. Poke all over with a fork, and pre-bake for about 5 minutes. Remove from oven.
5. Bake the pizza: Reduce heat to 350. Spread refried beans over hot pizza crust. Press corn tortillas over the refried beans to cover the surface. Spread enchilada sauce over corn tortillas. Sprinkle with cheese and bake for 10-15 minutes, until cheese is melted and bubbly. Remove from the oven. Top with romaine, avocados, cilantro, black olives, and green onions. Serve immediately.