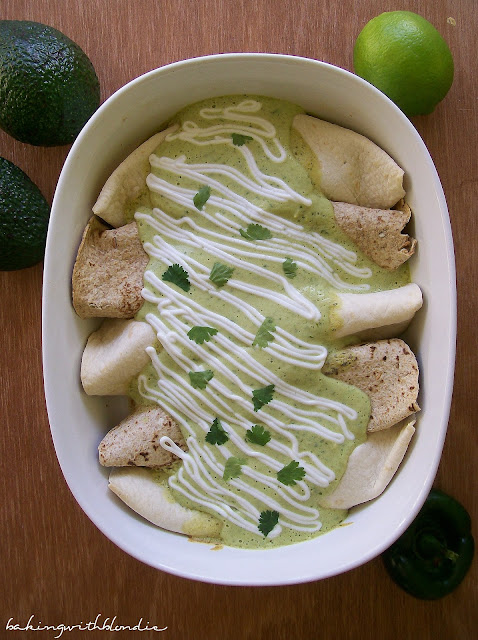 Slowly regaining the ability to walk again - still can't do "down" stairs or slight declines. Ryan seems to be recovering faster, or maybe he's just less of a whiner than I am.

You see, he paced me for my very first Half Marathon on Saturday. Awesome-husband-of-the-weekend award, eh? It went alright - even though they ended up changing up the course and making us run up the canyon after running down it. It was a beast! But I'm glad we did it. Even if it left us with a bit of a limp for a few days.

With that, I wasn't really in the mood to stand and cook for a long time. Thankfully, this recipe was just what the doctor ordered. You just make the sauce (takes minutes), saute up some peppers and onions, and throw it altogether in some fluffy tortillas. They were filling, but deliciously light. Normally I would go with the more smothered approach (and with red sauce), but these had such a delicate touch - especially with the cream sauce. it will blow your mind.

The sauce was creamy, but not heavy, and if more of my avocados had ripened, I would have added even more of them to it. I used two different kinds of tortillas to accommodate our different preferences: multi grain for me, white flour for Ryan & the Manchild. I used a less-than-large dish - but you can use a 9x13 just as well and stuff the tortillas with less filling.

I've used poblanos and jalapenos before, but I was a little nervous throwing them full-exposure into these enchiladas. I turned the heat down to one jalapeno and one poblano. They turned out to be pretty mild after their quick saute and long baking time in the oven.

I think next time we'll serve these along side some fluffy mexican rice, and maybe even add some refried beans to the enchiladas. If you have some leftover chicken in the fridge, shred it up and throw them right in these little lovers. You won't regret it. 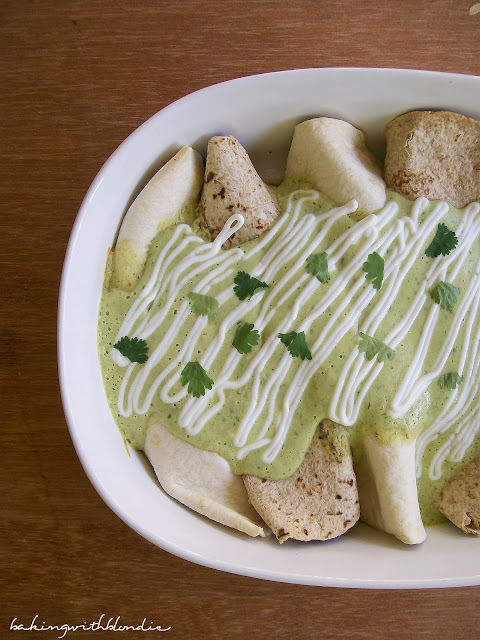 Directions:
To Make Cream Sauce:
1. Melt butter in skillet over medium heat. Add flour, whisking until golden and bubbly, about 2-3 minutes. Slowly whisk broth into the flour mixture. Bring to a boil, then reduce heat to medium-low and simmer for 5 minutes.
2 Stir in the sour cream, cumin, salt, garlic powder and pepper, whisking if necessary to remove any lumps.
3. Remove from heat, transfer mixture to a blender or food processor. Add avocados, cilantro and lime juice, and pulse until smooth and well-blended. Season with additional salt or pepper if needed.

To make enchiladas:
4. Prepare cream sauce (above). Preheat oven to 375 degrees. Grease a large baking dish.
5. In a large skillet, heat EVOO over medium-high heat. Add onion, poblano and jalapeno, and saute for 5-6 minutes until the onions are cooked and translucent. Remove from heat.
6. To assemble enchiladas, place a tortilla on a flat surface and spread a tablespoon of the avocado sauce down the middle of the tortilla. Layer on some of the vegetable mixture, shredded chicken and cheese. Carefully roll the tortilla and place it seam side down in the baking dish. Repeat with the remaining tortillas.
7. Drizzle the top with as much avocado cream sauce you want, then cover the dish with foil and bake for 20 minutes, or until tortillas are heated through and harden/crispify.
8. Remove from the oven. Drizzle sour cream (I used a piping bag and small tip), additional chopped cilantro. Add more sauce if desired.