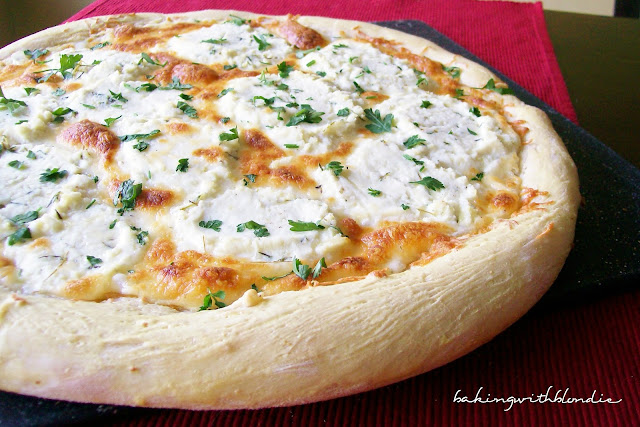 When Ryan and I lived in DC last summer for his internship, I discovered the beauty and wonder of the "white pizza". It was completely by accident.

Ryan had driven across the country to DC a couple weeks before with our car, while I stayed home for my concert, and flew out with the manchild later. The flight into Baltimore was much cheaper than flying right into Ronald Regan in DC, and thankfully the manchild slept the entire time. I knew he would conk out if I caught a flight later in the day.

Unfortunately, this made quite the little drive to our apartment, and we ended up getting into DC pretty late. I was starving, and would have eaten anything at that point. But lucky for us, a couple streets away from our new apartment, there was a small hole-in-the wall pizzeria (still open!) Without thinking much of it, we ordered just two slices of random pizza and headed outta there. Little did I know what beauty we ordered until I opened the box...

The slices were HUGE - practically 1/4 a pizza each. Ryan had ordered pepperoni and I crankily ordered "that white pizza over there" (I was still breastfeeding and just wanted to get out of there to do my business with the manchild). I thought it was some kind of chicken Alfredo pizza with random ricotta all over it (one of my usual favorites, the ricotta was new), but it was something pleasantly different. Something perfectly and surprisingly exciting: the mighty white pizza. The salty Parmesan cut through the creamy mild ricotta, the mozzarella cheese was bubbling and toasted and the sauce was practically heaven spread over fresh made-from-scratch pizza dough (I think it was rosemary dough). It was ridiculous, and I've honestly craved it ever since.

That is, until yesterday afternoon when I made this. All three of us inhaled this stuff like filthy heathens.

Prepare your pizza dough and pre-bake according to it's directions.

If you're making my pizza dough, prepare the dough 2 hours ahead of time. When properly risen,  preheat the oven to 425 degrees. Roll your pizza dough out on a slightly greased and dusted pizza pan (ours is huge, so if you have a smaller pan, use only half the dough in my recipe, or else your dough will be way too thick). Attack the dough with a fork (except for the crust edges), and throw into the oven for about 8 minutes (I usually sprinkle mine with a little EVOO and garlic powder after pricking the dough with a fork).

Prepare your sauce. In a pan, over medium, heat olive oil and add in onions. Cook until almost translucent, and add in your garlic (careful to not let garlic burn at all). When garlic is wonderfully fragrant, stir in heavy cream and simmer. Add salt and pepper to taste.

While your dough is cooking, and the sauce is simmering, prepare your topping mixture. Mix together all ingredients. Add salt & pepper to taste. Set aside.

The dough should be done by now. Spread white sauce all over dough, and sprinkle on mozzarella cheese. With about a tablespoon-full at a time, dollop and slightly spread your ricotta cheese mixture in blotches over mozzarella. Throw into oven for 20 minutes (checking pizza often). After 20 minutes (and my dough was pretty thick), I turned the broiler on low to get that beautiful toasted color.

*recipe loosely based on Serious Eats 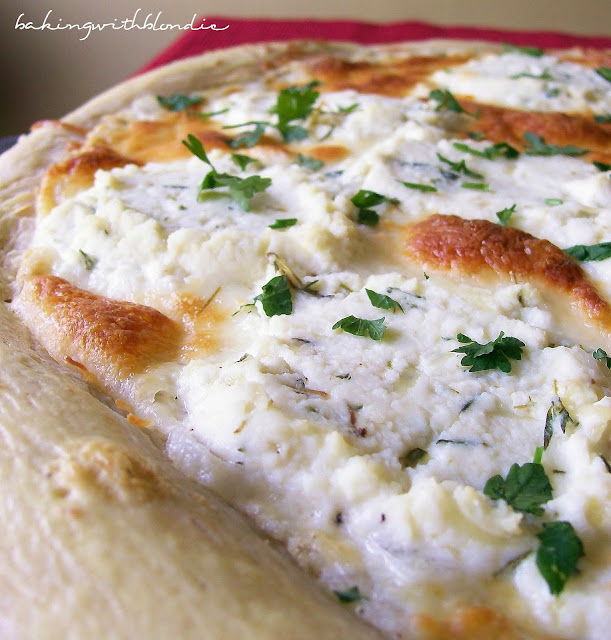