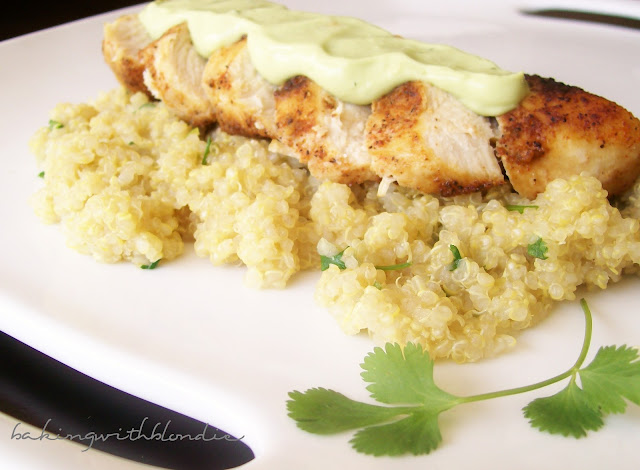 I've never cooked with quinoa before. I didn't even know what the heck it was. I found this recipe via Pinterest, and thought it looked completely mouth-watering (I mean, hello cilantro!) - plus, it would us a chance to try quinoa.

I tried out this recipe this afternoon, and quinoa is the BOMB, guys. Plus, it's super-trendy right now as far as food goes. And for good reason! Apparently there's some really awesome positives to eating this stuff:
Another new ingredient for me was Greek yogurt. It's so creamy and thick - it mixed in perfectly with the avocado and a touch of cilantro to make the puree tastefully lovely on the moist blackened chicken breast. I really enjoyed the contrast the cool sauce was with the slightly spicy dry rub on the chicken.

This dish is an absolute WIN.

Combine all the dry seasonings in a small bowl. Mix them together and then season both sides of each chicken breast.

Add the teaspoon of olive oil to a large pan or skillet. Heat the olive oil for a minute over medium/high heat. Add the chicken breasts to the pan. Cook for seven minutes on each side with the lid on.

Add the chicken stock and quinoa to a medium sauce pan. Bring to a simmer over medium/low heat. Reduce the heat to low and simmer for ten to fifteen minutes with the lid on, until all the stock has been absorbed.

After the chicken breasts have cooked all the way through, remove them from the pan and let them rest for seven minutes before slicing them.

Add the warm quinoa to a large bowl. Toss in the lime zest, lime juice, salt and pepper, and chopped cilantro. Mix to combine.

Serve the sliced chicken breast on top of the quinoa. If you find the blackened seasoning too spicy, you can add a quick and easy avocado cream sauce to cool it down. 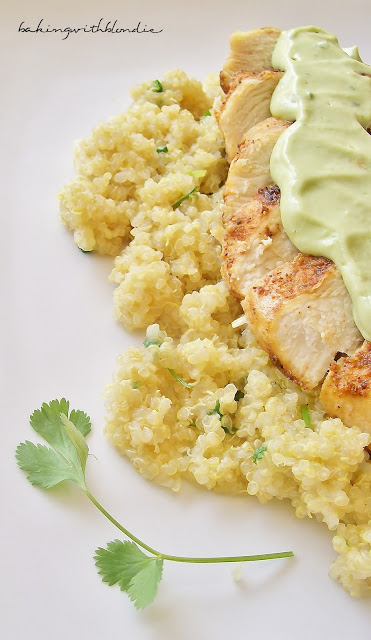 This recipe is being featured here: