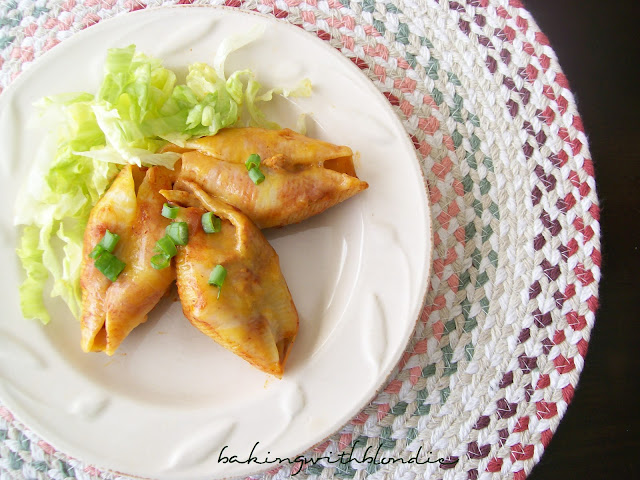 The first time I saw this combination on Pinterest I was very curious. I'd never really tried the two components in the same dish, but I couldn't just throw the idea out altogether. (You never know what awesomeness awaits - or what disaster approaches). Thankfully, this recipe is the former.

We tried this recipe this afternoon, and Ryan (once again) gave it the 'husband approved' stamp right on the forehead. They came out great! What an odd, trendy little dish this turned out to be.

We had already had beef this week, so instead of using ground beef as the recipe suggests, I used shredded chicken. I was craving cilantro and olives while stuffing the shells - I think next time we'll have both on hand to sprinkle on top after these little lovers come out of the oven.

The only other time I've tried working with shells is while stuffing them with a light ricotta mixture for manicotti (my Mom makes a killer manicotti). I've found a couple recipes on Pinterest for pesto stuffed shells... must try it soon, me thinks. Does anyone else a shell here and there while stuffing them? If so, you just kicked up your awesome points a few levels.

As you can see, I served the shells with some crispy shredded lettuce. Gave it the crunch it needed.

Mexican Stuffed Shells
with my alterations

In a pan brown the ground beef; add taco seasoning and prepare according to package directions. Add cream cheese, cover and simmer until cheese is melted. Stir together and mix well. Set aside and cool completely.

While ground beef is cooking, cook the pasta shells according to package directions; drain. Set shells out individually on cutting board or baking sheet so that they don’t stick together.

Pour salsa on bottom of a 9×13 baking dish. Stuff each shell with 1-2 tablespoons of the meat mixture. Place shells in 9×13 pan open side up. Evenly cover shells with taco sauce. Cover dish with foil and bake for 30 minutes.

After 30 minutes, add shredded cheese and bake for 10-15 more minutes with the foil removed. Top with green onions or olives if desired. Serve with sour cream and/or more salsa."


I found this recipe on The Girl Who Ate Everything, but it looks like it isn't her recipe. The original recipe is found on The Way to His Heart. Both great websites, but I wanted to make sure the original got it's fair dues.