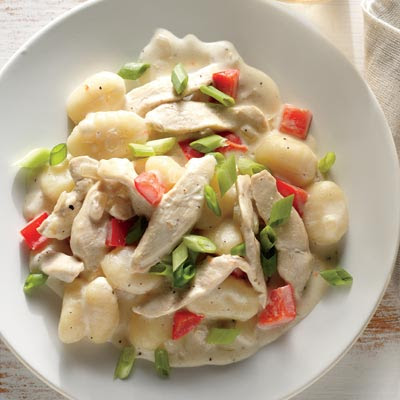 Last night I had rehearsal, and had to whip up something Ryan could easily reheat later. This recipe fit the bill perfectly. I don't know what it was about the sauce (I mean, it was a basic roux), but it was SO flavorful. Ryan loved it, and his brother (came over to watch the game) went on and on about it. Thanks!

This recipe also was pretty inexpensive to make. Always a plus around here.

Last year before I had my first child, I was in an organizing frenzy (okay, maybe that's all the time). I was just finishing up a 2-year subscription to my Everyday with RachelRay magazine, and had a HUGE pile of them in our teeny living room. I'm not a fan of magazines lying around everywhere (unless they're neatly in a basket or something). Ugh, I kept mine around for so long because I knew there were recipes in them I wanted to try later. Sooooo what did I do? I went through each magazine, cut out the pages with recipes I knew I'd want to make later, slid them in neat clear sheet protectors, and threw them all into a giant binder. Problem solved.

Eventually I want to '86 the binder, but for now, it's much tidier than the giant stack I had. Why the long story? Oh, right: the recipe I made last night was one from those Rachel Ray Mags. And man, I'm so glad I kept it. I think some of the ingredients could easily be substituted for a less white-cream-based dose. But, with every recipe, the substitutions rob you of tasting the recipe at it's full potential. I just make sure I get a run in later.

In a small saucepan, melt the remaining 2 tablespoons butter over medium heat. Whisk in the flour and cook until toasted, about 3 minutes. Whisk in the half-and-half and chicken broth; bring to a boil. Lower the heat and simmer until thickened. (This makes twice the amount of sauce I needed, so we ended up saving half of it in the fridge for a some pasta tomorrow). Whisk into the chicken mixture, then stir in the gnocchi. Bring to a simmer, then season with salt and pepper and top with the scallions. "