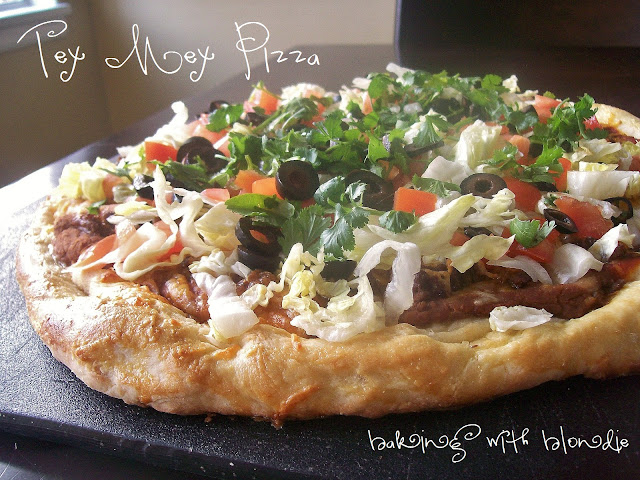 You guys are gonna die. I'm surprised we survived nirvana and back eating this. It was really filling, and very flavorful. I remember seeing a Papa Murphys commercial with ''Taco Pizza'' and thought of how weird that was... I mean, if you want a taco, eat a taco, right? I was wrong. I made said 'taco pizza' and it was really delicious! Definitely a keeper in our book. The marriage of taco and pizza has my blessing to continue on in it's own, trendy, radical existence.

I am in love with enchilada sauce. I could dip chips in it all day and be happy. I think next time we're going to add a bit more of it to the pizza after spreading the re-fried beans on the dough. Pizza should be gooey, and messy, dang it! And again, if you've been following my blog, you know of my love affair with cilantro....

Brown ground beef in pan. After it's cooked through, add in your taco seasoning (and a teeny bit of water), turn down heat and let it simmer for a bit. Prepare your pizza dough - roll out on a pizza pan, make sure to roll up the edges to make a raised crust (so the toppings will be trapped, and not run off the edges later). Brush crust edges with an egg wash or olive oil. Cook crust according to dough directions (mine said 475 degrees for about 5 minutes) on bottom rack.

Now for the layering. First, with a spoon, spread your re-fried beans all over your pizza crust (not around the edges, obviously). Next, spread your enchilada sauce over your re-fried beans. Now add your Mexican cheese blend to the party. Throw that baby in the oven for around 10 minutes (check on it. cooking time depends on your oven, and pizza size) in middle rack. Remove pizza from the oven.

Layer on that lettuce, tomato pieces, olives, and the blessed cilantro goodness. Enjoy!