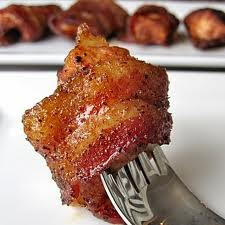 Image from The Other Side of Fifty

Holy Hanna. Doesn't that just make you wanna drool all over your keyboard? Bacon is my candy - so crispy, flavorful, and satisfying. I don't think you could ever go wrong with bacon. Whenever Ryan and I watch Chopped (very often...) and see a chef throw in some bacon, they're most likely to make it through to the next round (unless they forget to plate ingredients, serve raw meat, etc). People just love bacon. I don't think I could ever become a vegetarian because of bacon alone.

The recipe is Paula Deen's. Love that woman. Her recipes are the most tasty, in my opinion, on the Food Network (albeit not the most healthy at times... but who makes a Paula Deen recipe to be healthy anyways?) Surprise for you, though, there's no butter in this recipe. Probably one of the few of hers that don't.

Now we have bacon married with chicken on a plate? What a tasty-bite-never-to-forget. I had rehearsal last night so I needed to whip up something quick for dinner. I coupled the bacon-wrapped chicken with a green salad (iceburg lettuce, red onion, spinach, tomatoes, homemade croutons, grated paremesan with Olive Garden dressing), and a sliced up cold orange on the side. Colorful and delicious, I must say. The warm chicken mixed with the crispy cool salad hit the spot.

So, my buddy Alton Brown on the Food Network said that if you pre-cook the bacon a little for your "bacon-wrapped-anything", it will turn out much better (no soggy bacon). That's just what I did, and it turned out fantastic! I didn't have any toothpicks, so I improvised with some wooden skewers. The coating on the bacon-wrapped chicken is to die for. I thought I wouldn't like the chili powder, but it gives such tasty overtones to the dish.

Preheat oven to 350 degrees F.
Cut chicken breasts into 1-inch cubes. Cut each bacon slice into thirds. Wrap each chicken cube with bacon and secure with a wooden pick. Stir together brown sugar, chili powder and cayenne pepper, if using. Dredge wrapped chicken in mixture. Coat a rack and broiler pan with nonstick cooking spray. Place chicken wrap on rack in broiler pan. Bake 350 for 30 to 35 minutes or until bacon is crisp.

TIPS: Do yourself a favor and line your pan with aluminum foil. It makes for much easier cleanup. Also, spray the baking rack thoroughly with cooking spray to help with the cleanup as well."