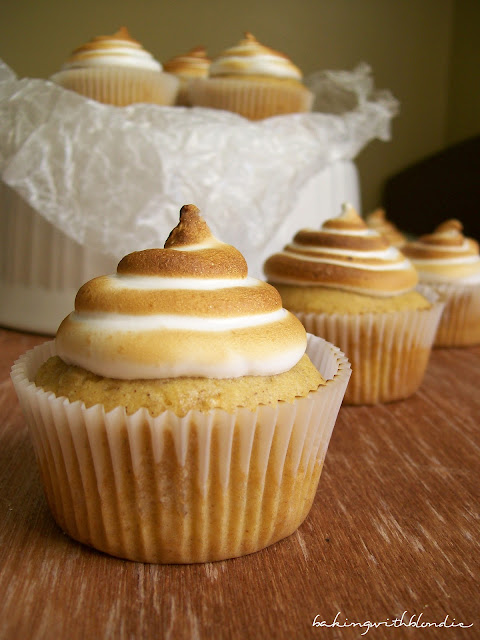 And the Fall-soaked recipes continue... 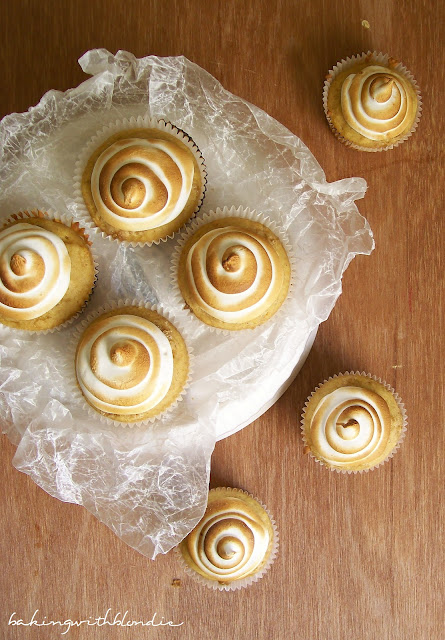 I was almost defeated by egg whites yesterday. I don't think I've ever been so annoyed by my own failure to read a recipe carefully, and ended up completely wasting 8 egg whites. EIGHT. I know they aren't the most pricey items to deal with - but it still felt like throwing quarters in the garbage when I wasted a batch.

You see, I read the recipe wrong, and added egg whites, sugar, AND vanilla together on the stove to heat before whipping them into marshmallow. I learned this was a huge mistake. The vanilla was supposed to be added after the said whipping. Rule: when you want to make fluffy egg whites into marshmallow (and fluffy egg whites in general) never ever ever add the vanilla before you whip the egg whites into stiff peaks. - 'Never ever ever' to be said T-Swift style. (And yes, I just said 'T-Swift'... must be hanging out with the youth lately.) No matter how much you pray and whine and curse about the mixture not fluffing up into beautiful peaks, it won't happen. Not in a million years. And adding powdered sugar doesn't help. Plus, we're pairing the marshmallow frosting with sweet potatoes. I don't think powdered sugar would go well with sweet potatoes. The first batched bombed. My sister-in-law suggested I make a 'Blondie Moments' section in my blog for when stuff like this happens (which is more often than I share, trust me) - this one would be a perfect addition.

I ended up making the recipe over again - halving the ingredients (luckily I bought extra eggs this week at the grocery store, so I had about 4 left to use). I added the vanilla post-whipping, and it came out beautifully. And there was much rejoicing.

Speaking of sweet potatoes - they are amazing in cupcakes. My husband and I prepared the sweet potato puree for the cupcakes (from baked sweet potatoes), and were a wee-bit skeptical. But after sampling the batter (raw eggs and all...) it was absolutely delicious. It tasted like some kind of carrot cake + pumpkin cake fusion. I think next time we'll dare to add even more sweet potato (we only added about 17 oz).

These would be such a fun way to add sweet potatoes into your Fall meal (even Thanksgiving if you're already thinking that far ahead). The combination is so divine and I instantly became addicted to the toasted marshmallow frosting after tasting it.

Oh, that's right: toasted. Any chance I can get to use my kitchen torch - I'm takin' it. 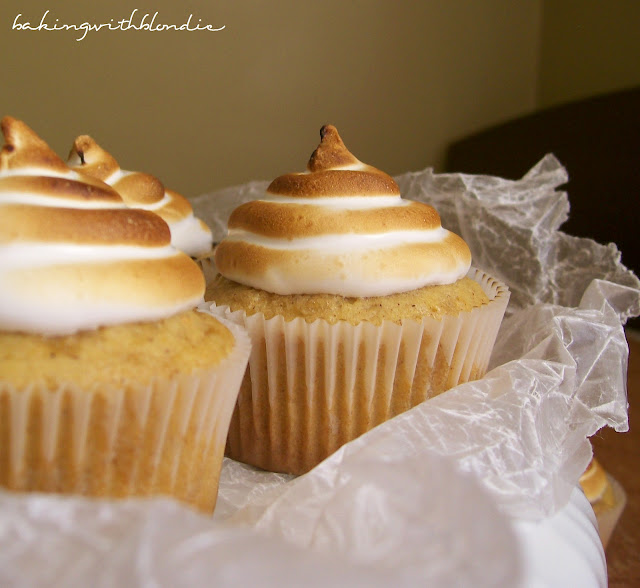 Directions:
1. To make cupcakes: Preheat oven to 350 degrees. Line cupcake pans with liners - this recipe makes about 24 cupcakes.
2. In a medium bowl, combine flour, baking powder, baking soda, salt and cinnamon. Stir together with a fork and set aside.
3. In the bowl of an electric mixer, fitted with paddle attachment, cream together the butter and sugar on medium-high speed until light and fluffy, about 2 minutes.
4. Beat in the eggs, one at a time, scraping down the bowl after each addition.
5. Mix in sweet potato puree and vanilla, just until incorporated.
6. Reduce mixer speed to low and add the dry ingredients, mixing until just combined.
7. Divide batter evenly between the prepared cupcake liners. Bake for about 18-20 minutes. Let cool in the pan for about 7 minutes, then transfer to a wire rack to cool completely.
8. To make frosting: combine egg whites, sugar, and cream of tartar in the top of a double boiler. (Annie just set her clean, dry mixer bowl over simmering water, to avoid dirtying two bowls - just what I did. Good idea, Annie!)
9. Heat the mixture, whisking frequently, until it reaches 160 F on your thermometer.
10. Transfer mixture to your electric mixer (new bowl, if you didn't heat it in your mixer bowl). Whisk starting at low and gradually increase speed to medium-high until stiff, glossy peaks form.
11. Mix in the vanilla until combined. Frost cooled cupcakes and brown with a kitchen torch.

Recipe from: Annie's Eats - she adapted her recipe from Better Homes and Gardens and Lovin' from the Oven. 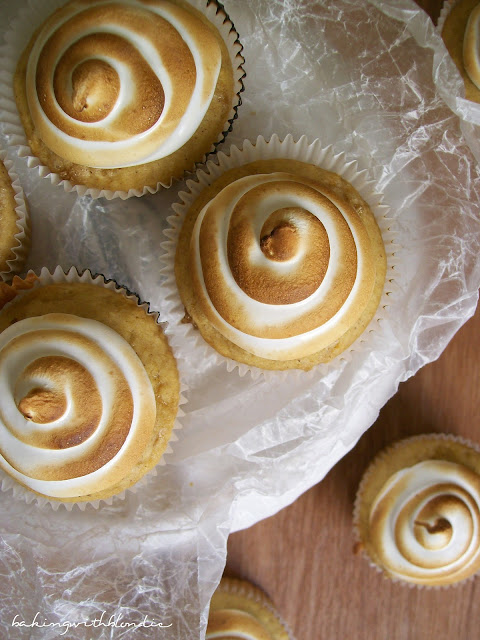