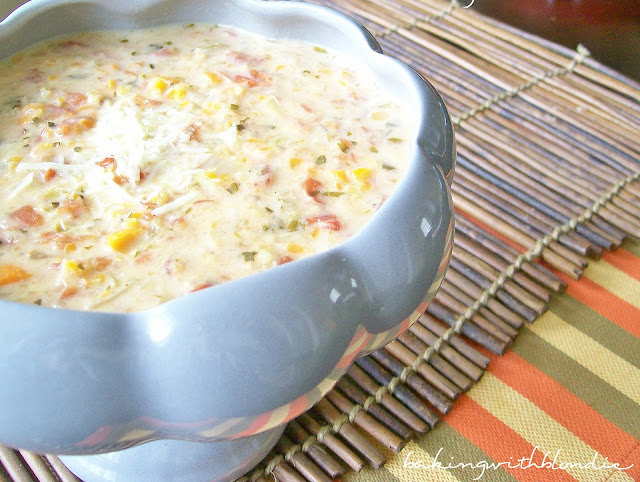 There's really nothing like a good bowl of soup simmering in the slow cooker, especially when a list of fresh vegetables is involved. Ryan and I really loved this recipe! The flavors are incredible and our house smells amazing from it.

There's also a few ways you can skinny up this soup as well if that tickles your fantsy. You could use skim milk instead of half & half, fake butter instead of real unsalted, and low sodium chicken stock. I served this up with some toasted sesame seed french bread (I love the way the toasted seeds taste).

Also, instead of slicing up the onion, celery, and carrots into little pieces by knife, I just threw them all in my mini food processor, and them dumped it right into my slow cooker mixture.

This recipe is from Karen (Utah Mama) - she LOVES this soup. When it comes to slow cookers (among many other things), she's the pro, and has plenty of recipes mastered. 365 to be more specific. She made a slow cooker recipe every day of the year - talk about hard core!

On an unrelated note, I've had a few questions lately about what kind of camera I'm using. Many are actually shocked to find out I've been rocking the Kodak C743 EasyShare. For real, man! Whenever I want one of those fancy schmancy cameras you see everywhere, I remind myself of our income, and look over my blog pics. Why spend hundreds and thousands of dollars on a camera with all the crazy settings, when I can just use the camera I already have? Works just fine to me! Someday, though, I think it'd be nice to rock one of those. But for now, it's just me and my little C743 lover.

So happy together (now you have that song in your head).

1.  Add tomatoes, celery, carrots, chicken broth, onions, oregano, basil, and bay leaf to a large slow cooker.
2.  Cover and cook on LOW for 5-7 hours, until flavors are blended and vegetables are soft.
3.  About 30 minutes before serving prepare a roux. Melt butter over low heat in a skillet and add flour. Stir constantly with a whisk for 5-7 minutes (I added in a teeny bit of garlic powder). Slowly stir in 1 cup hot soup. Add another 3 cups and stir until smooth. Add all back into the slow cooker. Stir and add the Parmesan cheese, warmed half and half (we used half whole and half skim milk), salt and pepper.  Add additional basil and oregano if needed.
4.  Cover and cook on LOW for another 30 minutes or so until ready to serve.


This recipe was chosen to be featured:

Thank you!
(linked up here)