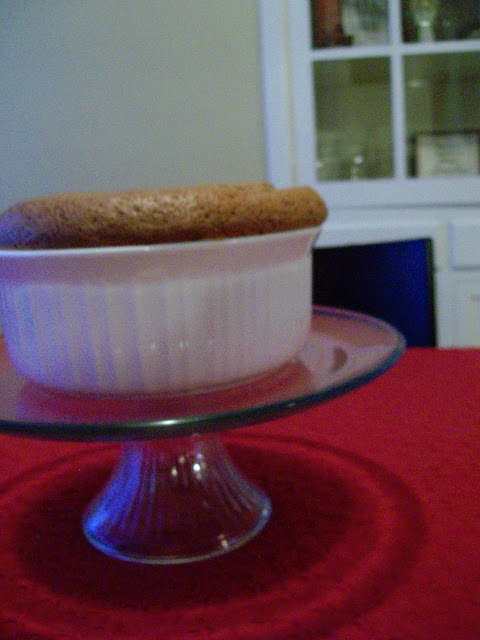 This was certainly an adventure. I have never made anything even close to a souffles before. It was slightly frustrating, and I definitely messed up a couple steps along the way, but I'm hopeful my next attempt (when eggs go on sale....) will be much, Much, MUCH, better. It didn't turn out at all, and I'm determined to Ace it next time.

Mistakes: First, I added the vanilla straight into the melted chocolate.... this just made a chocolate chunk. I later (after convincing myself to not jump off the roof) added a little oil to loosen it all up, and allow it to look more like a thick liquid. After checking the recipe, I realized I didn't add the butter into the chocolate - Mandy, read your recipe, dang it.

Second, I didn't wait for my eggs to reach room temperature before whipping the crap out of them in my Kitchen Aid mixer. Again, I should have read the recipe more carefully.
Third, I only have 4 little white ramekins, and it called for six. I decided to just pour the entire souffle mixture in my 1 quart white souffle dish. I didn't have enough to fill the entire dish. So, instead of just dumping it all in one dish, I think I might either cut the recipe down (souffles use SO many eggs, holy cow) I might try using my little four white ramekins and see if it works out better.

Fourth (yes, we're sadly on fourth), I will be more gentle when "folding in" the egg white mixture with the chocolate mixture. I think I mixed it too much, and the mixture lost a lot of fluffiness - My theory is that when I deflated the mixture, it took away any prayer of the souffles rising. So it just rose only about an inch above the pan... not very much at all according to souffles standards.

Successes:  First, it didn't deflate. Yay. That was one of my biggest worries. I've heard they're a little touchy, and I made an extra-careful effort to not open the oven, shake the pan, etc.

Secondly, it actually tasted really really good! It was light and fluffy, and one small serving was richly satisfying (Ryan learned this the hard way.... he kind of went crazy and ate waaaay too much.... it's too rich to eat more than a bit - maybe that's why the individual ramekins are suggested in this recipe).

Thirdly, it didn't stick to the pan. I know this is a stretch for a "positive", but I'm desperate.

Fourthly, nobody died before, during, or after making the souffles. Always a good thing.

Brush 6 (6-ounce) ramekins with soft butter, then coat with sugar. Put the prepared ramekins in the freezer. (This can be done a day ahead.)

Set an oven rack in lower third of the oven and preheat to 400 degrees F.

Put the chocolate and butter in a medium heatproof bowl. Bring a saucepan filled with an inch or so of water to a very slow simmer; set the bowl over, but not touching, the water. Stir the chocolate occasionally until melted and smooth. Remove from heat and stir in vanilla extract. Set aside.

Combine the egg yolks and warm water in the bowl of a standing mixer or large bowl and beat until frothy. Gradually add 2 tablespoons sugar, and continue beating until ribbons form, about 5 minutes. Very lightly fold the yolks into the chocolate mixture. (Rinse the bowl well, if using for beating the egg whites.)
Remove prepared ramekins from freezer. Put the egg whites in the bowl of a standing mixer, or large non-reactive bowl, add the lemon juice. Beat on medium until frothy; then gradually add the remaining 1/2 cup of sugar and increase speed to high. Beat until the whites hold a stiff but not dry peak.

Working quickly, fold about a third of the egg whites into the chocolate to lighten; then fold in remaining whites until blended. Gently ladle or spoon the souffle mixture into the ramekins, and place on a baking sheet. (Level off the surface with a straight edge, scraping any excess mixture back into the bowl.)
Immediately bake until the souffle rises about 1 1/2 inches from the ramekins, and the tops are touched with brown, about 18 to 20 minutes. Remove from oven, dust with confectioners' sugar and serve immediately."

I knew this would be a challenge for me, and I'm glad I recognized where I must have gone wrong in the process. I can't wait to give it another try. If you've made a successful dessert souffle before, any suggestions would most definitely be appreciated... I'll make sure to follow up with my second attempt when it happens.